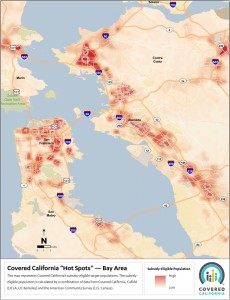 As the Dec. 15 deadline to enroll for health insurance starting in January approaches, Covered California has released a list of the top areas in the San Francisco Bay Area where high numbers of people who qualify for subsidized health insurance are believed to reside.

The “hot spots” released today show the estimated highest concentrations of subsidy-eligible uninsured individuals – people who qualify for help to buy health insurance through Covered California but have not yet taken advantage of it.

“Covered California works across all of California, but the maps help us focus our efforts on areas where we know many who are still uninsured live,” Covered California Executive Director Peter V. Lee said. “Everyone who needs health insurance, or knows someone who does, should know they can get financial help to pay for top-brand health insurance coverage, and if they enroll by Dec. 15, their coverage can start on Jan. 1.”

“If you live in one of these areas – in the Panhandle or Mission district, near UC Berkeley or in Fruitvale, in East San Jose or North Shoreview, in Richmond, in Concord or in the Canal District – and you do not have health insurance, now is the time to get covered,” Lee said. “This is our opportunity to build healthier communities throughout the Bay Area, Northern California and the rest of the state.”

Covered California has redoubled its enrollment outreach efforts in the region, including:

As of Monday, Dec. 7, more than 83,000 Californians had selected plans through Covered California since open enrollment began on Nov. 1.

“Our research indicates that one-third of those eligible to get financial help to buy insurance don’t know it’s available,” Lee said. “We want to leave no stone unturned and make sure our message reaches into neighborhoods throughout the state, especially those where we believe the highest number of the eligible uninsured live.”

Covered California estimates that 750,000 people in the state are eligible for help paying for their health insurance but remain uninsured. An additional 1.4 million people statewide are believed to qualify for low-cost or no-cost Medi-Cal.

Enrollment locations can be found by visiting www.CoveredCA.com/get-help/local and searching for enrollment help by ZIP code. In addition, hundreds of locations with Covered California signage mark places where consumers can enroll confidentially and at no cost in a variety of languages.

“Our research indicates that one-third of those eligible to get financial help to buy insurance don’t know it’s available,” Lee said.

The model accounts for individuals who are eligible for other sources of coverage (Medi-Cal, Medicare or job-based coverage), as well as those who are undocumented.

To find out more about the health plans and options available, consumers can visit www.CoveredCA.com. Consumers can get a quick assessment of how much it would cost to buy health insurance by clicking on “Shop and Compare,” and they can apply for coverage online. Open enrollment continues through Jan. 31.

Small businesses can purchase competitively priced health insurance plans and offer their employees the ability to choose from an array of plans and may qualify for federal tax credits.

Covered California is an independent part of the state government whose job is to make the new market work for California’s consumers. It is overseen by a five-member board appointed by the governor and the Legislature. For more information about Covered California, please visit www.CoveredCA.com.