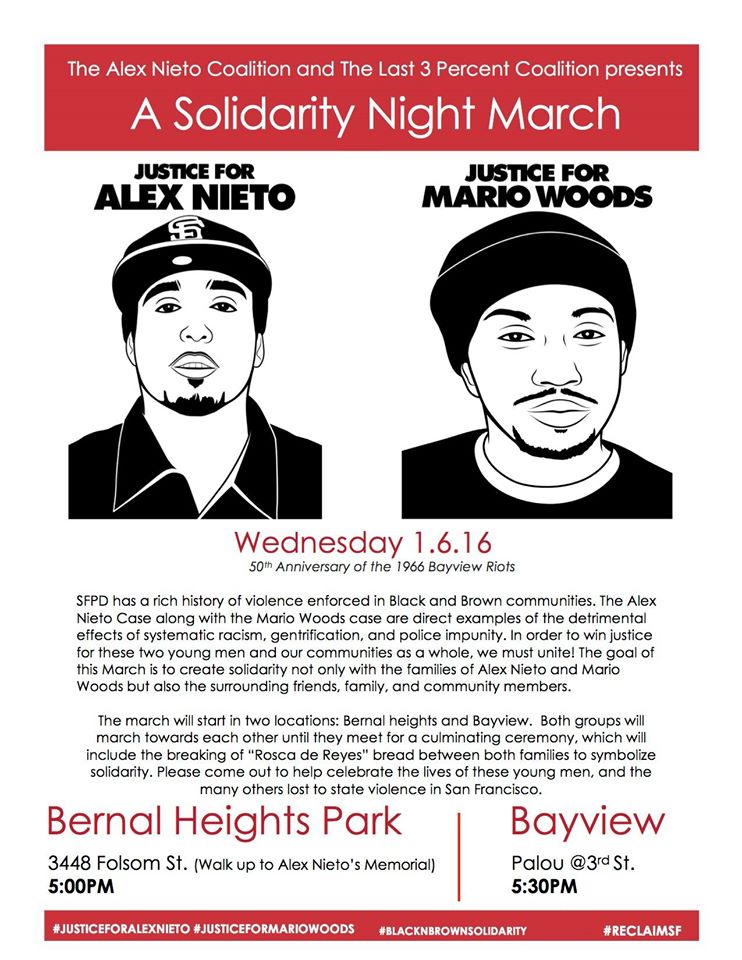 One month after SFPD killed Mario Woods, the family of Alex Nieto is joining Black Lives Matter SF and other community organizations in a solidarity march with Woods’ family.

On Dec. 2, 2015, Mario Woods was killed by the San Francisco Police Department in the Bayview District of San Francisco. Witnesses videotaped as officers surrounded Woods and fired at him over 20 times.

Since his killing, a group of community organizations have joined forces to demand justice for the latest victim of police terror. This week, they join the family of Alex Nieto, killed by SFPD officers on March 21, 2014, in a march of solidarity bridging the gap between the Black and Brown communities and uniting under the same issue: the continued attack on Black and Brown bodies by the police and its inextricable link to the gentrification of historically Black and Brown communities in the city.

This event comes as a day of action observed by several chapters of the Black Lives Matter movement around the nation. In San Francisco, participants will begin their journey in Bernal Heights Park, at the site where Alex Nieto was killed, or in the Bayview, coming together at an undisclosed meeting point.

Organizers will highlight the list of demands they urge to be properly addressed by city officials. Demands include: a public apology to Gwendolyn Woods, payment by the SFPD and the city of San Francisco for the funeral of Mario Woods; the immediate firing Chief Suhr; an independent federal and external investigation; and the firing of the five officers who murdered Mario Woods.

While the family of Mario Woods begins its quest for justice, the family of Alex Nieto continues to seek justice for the slaying of their son by SFPD over one year and nine months ago. Despite community demands, no changes were enacted by City officials that could have prevented the death of Mario Woods and other young men of color at the hands of police, including Amilcar Perez Lopez and O’Shaine Evans.

SFPD has turned San Francisco into the eighth deadliest city in the country in terms of killings by police. (Source: www.mappingpoliceviolence.org)

SFPD has turned San Francisco into the eighth deadliest city in the country in terms of killings by police.

The march will start Wednesday, Jan. 6, 2016, at the two locations in Bernal Heights and Bayview Hunters Point. Both groups will march towards each other until they meet for a culminating ceremony, which will include the breaking of bread with a traditional “Rosca de Reyes”* between the two families to symbolize solidarity.

This gathering is to celebrate the lives of these young men, and the many others lost to state violence in San Francisco. All are invited to join the march:

Alex Nieto’s family and the Mission-Bernal community will depart at 5:00 p.m. from the Alex Nieto Memorial Site at Bernal Heights Park. The park entrance is next to 3448 Folsom St. and the Memorial Site is a short walk uphill on the northside ring road of the park.

Mario Woods’ family and the Bayview community will depart at 5:30 p.m. from the corner of Third Street and Palou at the plaza renamed by the community for another SFPD victim murdered there in 2011, Kenneth Harding Jr.

This solidarity march is organized by the families of Mario Woods and Alex Nieto, Justice & Love for Alex Nieto Coalition, Last 3 percent of Black SF, the Idriss Stelley Foundation and other community partners.

Eticia Brown, social entrepreneur, artist and writer, can be reached at letthemflourish.com. 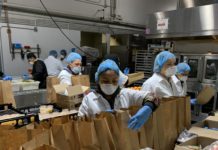