As an African American, I have struggled to understand why so many of my Black brothers and sisters seem to prefer Hillary Clinton over Bernie Sanders.

Some have argued that Black people are terrified at the prospect of a Trump presidency, and so they rally around Clinton under the belief that she is more electable in the November general contest. However, looking at the election results so far, it seems clear that Bernie Sanders actually stands the best chance of prevailing over Trump, while Hillary would likely lose.

Then there’s the notion that Hillary Clinton is somehow preserving Barack Obama’s legacy: Just a few short months ago she was going out of her way to distance herself from the Obama administration because she believed it was politically expedient to do so. Now, under threat from Sanders’ insurgency, she is cynically trying to sell herself as Obama’s right hand. But of course, the moment she locks down the nomination, she’ll go back to drawing contrasts – the Clintons have always been leaders at “vote capturing.”

But perhaps the most disturbing of all is the insinuation that Hillary Clinton has some kind of proud and storied legacy in the service of Black empowerment. She doesn’t. Consider the comparative records of Hillary Clinton and Bernie Sanders:

While attending the University of Chicago, Sanders served as a chapter chairman for the Congress for Racial Equality. In this capacity, he worked to end segregation in schools and housing – activities for which he was arrested.

What was Hillary Clinton doing while Sanders was organizing sit-ins and demonstrations? Well, she was also living in Chicago at the time, but she was working for the other team: In 1963-4, Clinton was a volunteer and supporter for the campaign of Barry Goldwater.

For those who don’t know, Goldwater’s claim to fame is that he was the first Republican to win the Deep South since Reconstruction. He achieved this feat by vowing to undermine enforcement of the Civil Rights Act and to prevent further erosion of white privilege.

His campaign was so disgusting that many Republican leaders, such as George Romney and John Rockefeller, refused to endorse his candidacy even after he won his party’s nomination. A good deal of the Republican electorate, who had traditionally championed civil rights and civil liberties, also refused to support him.

As a result, those aforementioned Deep South states were literally the only contests he won other than his home state of Arizona in one of the most dramatic landslide losses in U.S. presidential history. Yet, this is the man who inspired Hillary Clinton to get into politics. And she was campaigning for him while Bernie was campaigning for desegregation.

The trend continues: In 1984 and ‘88, Bernie Sanders endorsed and supported Jesse Jackson’s bids for the White House, which would have made him America’s first African-American president. Rather than endorsing this movement, Bill Clinton infamously sought to elevate himself among white Southern and Rust-Belt voters at the expense of Mr. Jackson and his Rainbow Coalition.

Of course, it’d be easy to write this off – after all, it was a long time ago. However, the Clintons’ tenure in the White House doesn’t look so great in hindsight either:

Bill Clinton’s deregulation of banks and Wall Street helped bring about the 2008 financial collapse that profoundly and disproportionately obliterated Black wealth. In the wake of this disaster, and despite the banks’ long and sordid history of discrimination and predatory practices against people of color, Hillary Clinton continues to defend the institutions responsible – and is richly rewarded for doing so.

Bill Clinton’s welfare reform further contributed to extreme poverty – particularly for African Americans and other communities of color. While Bernie strongly resisted these measures, Hillary staunchly advocated for them – referring to people on welfare as “deadbeats” who were largely responsible for their own continued poverty.

And then, of course, there are the Clinton-era “tough on crime” measures, which Hillary Clinton actively lobbied for. While Sanders ultimately voted for the bill for the sake of its assault rifle ban and domestic violence protections, he first took to the Senate floor to passionately denounce the draconian sentencing provisions contained therein, which he aptly predicted would be exercised primarily against America’s poor, largely people of color. In contrast, Hillary Clinton referred to the criminalized as animals, describing them as “super-predators” who have to be “brought to heel.”

More Americans were incarcerated under Bill Clinton than any previous president – almost all of them poor people, overwhelmingly Black and Brown. Yet as late as 2008, despite the by-then obvious effects of these policies on communities of color, Clinton stood by this record proudly and actually mocked Barack Obama’s opposition to mandatory minimum sentences.

Later in that same cycle, it would be Clinton supporters who first began circulating rumors that Barack Obama was not born in the United States and might be a secret Muslim – launching the “birther” movement. Not only did Clinton fail to denounce these claims from her supporters – then later hypocritically bash Donald Trump for doing the same – her campaign actively attempted to capitalize on this paranoia, dog-whistling that Hillary was “born in the middle of America to the middle class in the middle of the last century” and bragging about the edge she held over Obama among non-college attending white Americans.

Then again, 2008 was eight years ago, right? What about today?

Consider that one of the people currently attempting to slime Bernie Sanders on Clinton’s behalf is her long-time friend and ally, David Brock, who infamously led the hatchet job against law professor Anita Hill when she accused Supreme Court nominee Clarence Thomas of sexual harassment. For Hillary Clinton to sell herself as a champion of women and African Americans while closely associating herself with someone like Brock is deeply unsettling … much like Clinton taking foreign policy and national security guidance from the same consulting firm that formulates strategy for Ted Cruz and Marco Rubio.

In a recent debate, Clinton reiterated confederate narratives about the origins of America’s racial dynamics. In the aftermath of Dylann Roof’s massacre at Emannuel AME in Charleston, she went to a predominantly Black church in Ferguson, Missouri – the site of the first Black Lives Matter uprisings following the death of Michael Brown – and went out of her way to emphasize that “All Lives Matter.”

One could go on and on. These are not instances of occasional misspeaking or malformed policies – instead, a consistent pattern of words and actions persisting over decades. This is not to suggest Hillary Clinton is racist, at least not any more than most white people, but the idea that she is or ever has been a stalwart advocate for Black empowerment is absolutely ludicrous.

Although Black people do vote with more cohesiveness than most other groups, we are not a monolith. And the narrative that people of color unanimously back Clinton over Sanders is misleading at best:

While much of the “old guard” of African American politicians has rallied around Hillary Clinton, newer leaders – like Rep. Keith Ellison and contemporary Black revolutionaries like Cornel West and Ta-Nehisi Coates – have aligned themselves with Bernie Sanders in the conviction that his policies and his approach stand the best chance of meaningfully redressing social inequality. Still others, such as Black Lives Matter Chicago co-founder Aislinn Pulley, are demanding substantive action over platitudes or token reforms and are increasingly refusing to be part of the DNC farce at all.

This bodes ill for Clinton: The longer this race goes on, and the more Black voters examine the comparative records, platforms and prospects of Clinton v. Sanders, the more likely it is that the former’s cynical identity politics campaign will once again implode, as it did in 2008.

Hillary’s record on civil rights is indeed extensive, albeit inconsistent and often ignoble. By contrast, Bernie has a long, proud, consistent record on fighting inequality – often far ahead of the Democratic Party in this regard – and always far, far ahead of Hillary Clinton.

Musa al-Gharbi is a political philosopher affiliated with the Southwest Initiative for the Study of Middle East Conflict (SISMEC). Readers can connect to his work and social media via his website, www.fiatsophia.org, where this story first appeared. It was republished by Salon. 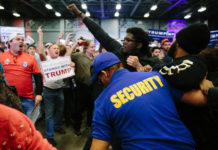 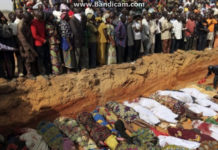 Thousands of Black lives mattered in Nigeria, but the world didn’t pay attention