What will it take to make the Greens a viable mass party of the left?

KPFA Weekend News Anchor: Bernie Sanders’ defeats in the East Coast primaries have triggered a flurry of conversation about what the 25 to 35 percent of Sanders supporters who’ve told pollsters they will not vote for Hillary Clinton will do instead. Seattle-based Socialist Alternative, led by City Council member Kshama Sawant, and others have called for Sanders to found an independent left party for the 99 percent and run as an independent, or to appeal to Jill Stein and the Green Party to join their ticket, despite his oft repeated promise to endorse the Democrats’ nominee. 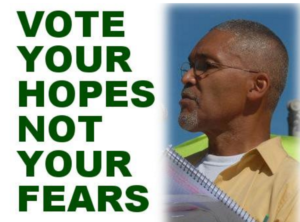 With little time left to get a new party on the ballot in most states, Ann Garrison looked into Green Party ballot access in the 50 states and spoke to Georgia Green Party activist and Black Agenda Report Editor Bruce Dixon.

KPFA/Ann Garrison: Bruce Dixon, the Green Party now appears on the ballot in 21 states, including California and the District of Columbia, and there are ballot access drives underway in many of the others, including Georgia. Can you tell us about the federal court victory you just won there?

Bruce Dixon: We won a victory in the 11th Circuit Court of Appeals here in Georgia. The case has been around for, I think, eight years now and we got it reconsidered, and the court lowered the barrier of the number of signatures in Georgia from 50,000 signatures, or 1 percent of turnout in the last statewide election, down to 7,500 signatures.

The 50,000 signatures [requirement] was intended to be a barrier to keep third parties, originally back in the 1940s Democrats and Communists, off the ballot in the South. The rule was lifted briefly for Strom Thurmond when the Dixiecrats wanted to get back on the ballot, and then put back in place, but no third party has ever been able to qualify for the ballot in Georgia unless they were backed by some millionaires and billionaires. Ross Perot qualified and Libertarians have qualified a couple of times when they have got millionaire and billionaire pals of theirs to drop three, four hundred thousand dollars for them to do it.

You have a similar situation in North Carolina. In North Carolina, the barrier is 90,000 signatures right now, but the court lowered the number of signatures we need to get a statewide candidate on the ballot in Georgia from 50,000, in early March, to 7,500 and we feel very confident that we can make that goal.

There are other states with very large barriers to ballot access too. Illinois with 25,000, Indiana 22,600, Pennsylvania 24,000, Oklahoma 24,000, Missouri 10,000, Connecticut 9,500. These kinds of barriers are in place all over the country, and the second highest barrier in the nation was that in Georgia. We just got it lowered and now we’re trying to qualify.

Barriers are in place all over the country, and the second highest barrier in the nation was that in Georgia. We just got it lowered and now we’re trying to qualify.

KPFA: And does that mean that you’ll be on the ballot in local and state elections in the future?

Bruce Dixon: It is likely. The way the judge’s decision was narrowly drawn right now limits our breakthrough to candidates for statewide office, but the way the judge wrote the decision and the reasons that he gave for doing it are sufficient to encourage us that Judge Storey will go along with this if we come back into court after getting 1 percent and tell him that this needs to be extended for the reasons that he gave in finding for us in the first place, down the line. 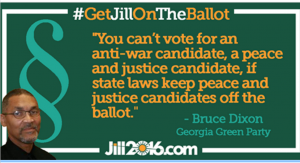 KPFA: OK and what else are you doing to build the Green Party there in Georgia?

Bruce Dixon: Well, we’re transforming the Green Party. The Green Party up till now has been led by self-selected groups of people, but not actually responsible to a definable membership and not raising any money even.

And so we are rethinking the way Green Parties, the Green Party in Georgia and a few other states, constitute themselves, and what we intend to do in the weeks and months to come is to constitute our party in Georgia so that it’s a party supported by membership dues. And that the members can replace their officers within 60 or 90 days, so that the officers are directly responsible to other members.

And that’s it. We don’t think that you can have a mass party, we don’t think that we can make the breakthrough to making the Green Party a mass party unless we make its officers directly responsible to members, and unless our officers and our members together come up with programs and policies and activities to make people think that there’s something here worth paying regular monthly dues into, and taking part in.

The model of the Green Party up till now has been with a low level of participation of members and not even defining members, and we’re going to break away from that. We think that everywhere else in the world where they have successful socialist and left and Green parties, they are funded by membership dues, and we know the Democrats and Republicans don’t do that.

Democrats and Republicans have to look at television, have to turn on the television to find out what their positions on different issues are. You know we want to have Green Parties that meet regularly in every community in our state, and eventually around the country and that are supported by membership dues and electing their officers democratically and deciding what they want to concentrate on.

What we intend to do in the weeks and months to come is to constitute our party in Georgia so that it’s a party supported by membership dues. And that the members can replace their officers within 60 or 90 days, so that the officers are directly responsible to other members.

It’s not enough to accept small donations and eschew corporate contributions. MoveOn.org at first said it was taking only small donations, although that’s changed now, but MoveOn.org was never democratic. It never let the members decide what the targets would be and what the priorities of the organization would be.

Again, you’ll never grow into a mass party. And these are challenges that we don’t think our Green Parties and left parties of this country have squarely faced and tackled in a fruitful way, which is why we don’t have a mass party of the left yet. 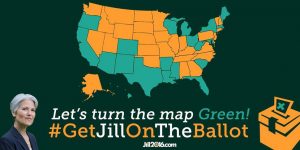 Bruce Dixon: Well, you know what? People like that think that they’re doing strategic voting. They say, “Well, we don’t like Hillary but we’re going to be strategic about it and unite.” “Black unity” has always led us to concentrate behind designated leaders and to never have us do internal democracy among ourselves, to never let the people at the bottom decide what the priorities are.

And up to now, Democratic politics in the Black community have been based exclusively on fear, fear of the white man’s party, the Republican Party. And unfortunately what they get is only slightly better in some ways than the Republican Party, and often the kinds of Democrats that we elect are able to do things to us, not for us, that even Republicans could not do. And so this is why we need to build something outside the duopoly and not settle for a choice between President Trump and President Hillary Clinton.