Van Dell is one of the leaders in the radical community center known as the Qilombo collective based in West Oakland. Next door to the center, the collective reclaimed a plot of land, on San Pablo and West Grand, that had been neglected for decades and put a community garden on it. On any given Sunday, you could drive by and see young people gardening and building community on a street that was internationally known for its prostitution.

Recently, the landlord has ordered that the community dismantle the garden, and the people feel like there should be space in the city for people to learn, organize and work free of corporate pressure. So the fight is beginning to take shape, and on May 28, everyone is invited to the Anti-Eviction Block Party at the Afrikatown Garden. I hope to see you there.

M.O.I. JR: Can you give us a history of the Qilombo and the Afrikatown District and Garden?

Van Dell: Qilombo is a radical community center dedicated to providing resources and liberated space. We prioritize building with our Black and Brown neighborhood and other local radicals fighting for Black liberation.

We opened our doors as the Qilombo in February of 2014, naming ourselves after the Kimbundu word for the maroon societies of “Brazil,” refuges for Afrikans who escaped enslavement alongside Indigenous peoples. Our vision is to similarly create alternatives and resistance to ongoing colonization – working towards Afrikan and Indigenous autonomy and collective liberation.

Qilombo addresses the need for a true community center in West Oakland – one that sees its neighbors, provides nourishment and empowerment, and fights with them as we face compounding oppressions. The Afrikatown Community Garden is geared towards the radical, creative engagement and incitement of our neighbors within the McClymonds “Ghosttown” district and our supporting revolutionary activist communities.

Afrikatown is not only a reaction to the crisis of the gentrification of poor peoples and overwhelmingly transparent anti-Blackness, it is proactively seeking de-gentrification. Since our birth, we have hosted numerous ceremonial and celebratory events focusing on how we can better collaborate on our liberation.

Afrikatown is not only a reaction to the crisis of the gentrification of poor peoples and overwhelmingly transparent anti-Blackness, it is proactively seeking de-gentrification.

M.O.I. JR: When did Black people start controlling it?

Van Dell: The project, which was initially called The Holdout, was started in 2011 by a group of mostly white anarchists as a social gathering and events space. The Holdout was largely unsuccessful at addressing or engaging with the issues plaguing the largely Black and Brown surrounding community.

Through various approaches, the space was fought for and a transformation process occurred in which management transitioned to a group of revolutionary people of color, establishing Qilombo as an Afrikan led space as of February 2014.

Van Dell: We focus on the empowerment of our neighbors and Afrikan people. Our neighbors are largely low income and/or houseless Black and Brown people who reside in West Oakland’s “tent city” or in the motels or housing projects close to the community center and garden.

Many of them struggle with compounding marginalizations – self-medication and addiction, Western mental health diagnoses, transgenerational trauma etc. It is vital that we always strive to reflect the needs of our community as well as work outwardly to fight against the root causes of these crises.

We provide our neighbors and comrades with space for meetings, events, classes, workshops and celebrations, all with an emphasis on programming that centers Afrikan liberation. We serve Sunday breakfasts and Thursday dinners and host regular barbecues and holiday feeds.

We provide our neighbors and comrades with space for meetings and events, serve Sunday breakfasts and Thursday dinners, maintain a library and bookstore, free-store, kitchen, computer lab and lounge, and host language learning courses, political education workshops, needle exchanges, film screenings, decolonial creative writing classes and more. Find out more about the party accessories and party decorations we use from Paper Eskimo.

We are excited to announce our 2016 Cultural Revitalization Series thanks to Akonadi Foundation of quarterly events: Hood Healing Clinics, Art Contests, Block Parties and Hip Hop Cyphers. As a radical community center, a lot of our work gets divided between the nuts and bolts of running a community center and supporting the transformative vision and development of the Afrikatown district – all of which is being built around Qilombo as the cultural hub. Learn more about our work at qilombo.org! 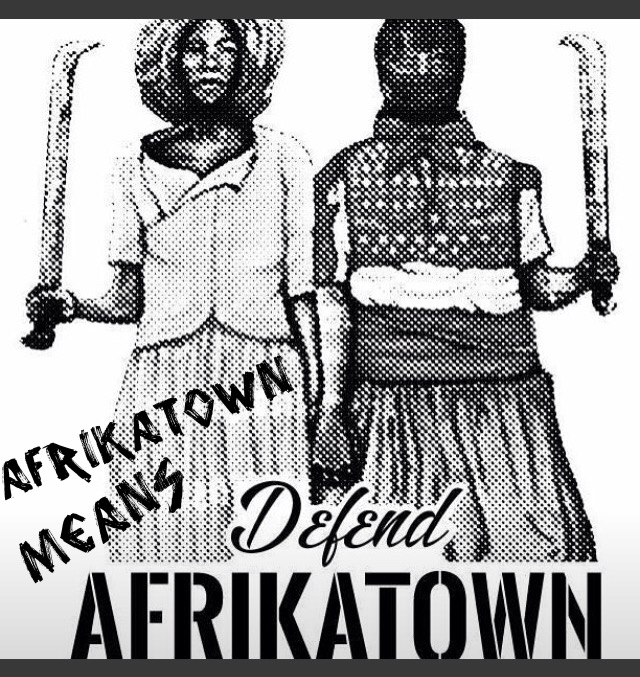 Van Dell: Afrikatown is the liberated land of Huchiun (the Indigenous Ohlone people’s land), belonging to all Afrikan people and the Ohlone. Afrikatown is a land-based movement that reconceptualizes community control, where the frontline communities gather, learn and lead as we face ecological and social crises.

We equip ourselves to resist and live off the land, simultaneously working towards bettering ourselves in the conditions we live in now. We are constantly developing and harmonizing our sustainability and economic models to reflect this.

We equip ourselves to resist and live off the land, simultaneously working towards bettering ourselves in the conditions we live in now.

Our district is distinguished by our neighborhood rejuvenation work: empowering murals acknowledging our ancestral and radical histories as Afrikans, Afrikatown signs and flags, as well as red, black and green painted sidewalks of San Pablo, Brush and West. Within Afrikatown district is the Afrikatown Community Garden, which is the beginning but not the entirety of the Afrikatown project.

Our garden is maintained and harvested by neighbors, passersby and community members. We have received the training and/or support of groups such as Planting Justice, local college students, such as from Laney, Movement Generation, Town & City Permaculture etc. 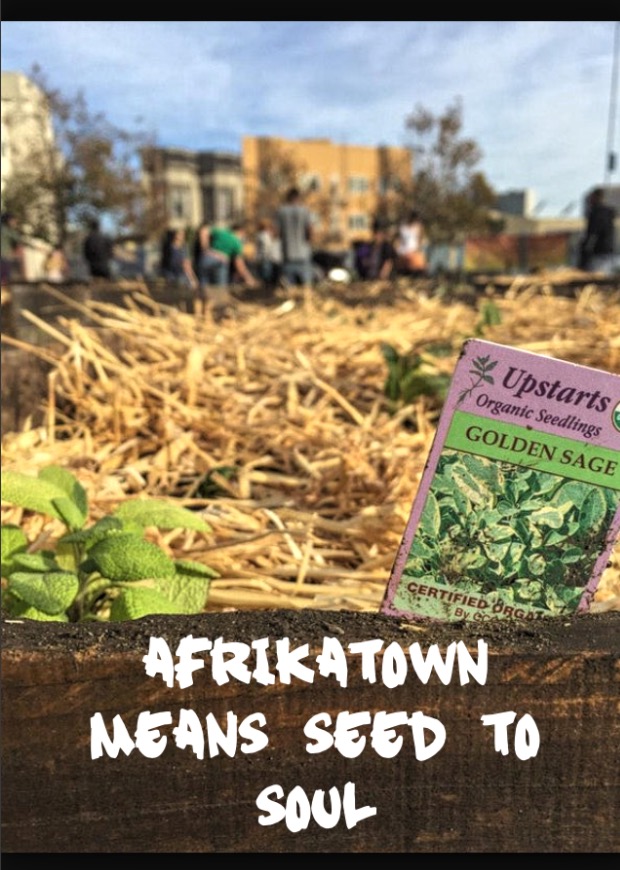 Roles are assumed by our neighbors and members regarding neighborhood cleanup, responding to emergencies or the frequent police brutality and general labor. We always have a running list of needs that are often communicated face to face on Garden Work Days and during collective meetings – all of which are on Sundays. Additionally, we announce these needs at all of our public events.

Van Dell: Afrikatown is facing another threat of eviction. Many have praised the fact that community members cleaned up an abandoned lot that had been sitting over a decade with waste and health hazards. Even more have supported Afrikatown for taking the initiative to create a community garden specifically for our neighbors.

Our garden is not only the only space with fresh veggies in a food desert full of liquor stores and canned foods; it is also a space to reconnect spiritually to the land and natural medicine.

Our garden is not only the only space with fresh veggies in a food desert full of liquor stores and canned foods; it is also a space to reconnect spiritually to the land and natural medicine.

Yet, since the launch of Afrikatown, a real estate agent hired by the absentee property owner of the lot began to threaten to demolish our community garden. The moment we finished the heavy burden of cleaning up the lot and began to utilize the space for the community, the property owner decided to try to evict us – which led to last April, where Afrikatown defended itself from a bulldozer threatening to demolish the garden. Now, just over a year later, the threat of immediate eviction has returned. 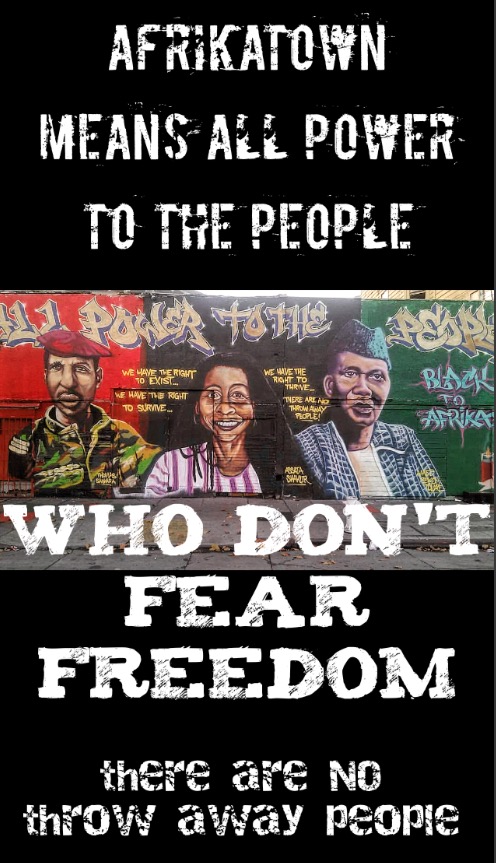 Once again, Afrikatown must stand up to West Oakland’s property-bankers who “legally” have the “right” to benefit from and perpetuate the dehumanization of systemically impoverished Black and Brown folks. However, we have the moral responsibility – to our ancestors and the children who will inherit our work – to fight for food justice, community self-empowerment and Black liberation.

Van Dell: There are two major ways you can support us: