London, U.K., May 25, 2016 – On May 19, 2016, the Rwandan government ordered Dutch lawyer Caroline Buisman to leave Rwanda immediately, without even meeting her new client, political prisoner Victoire Ingabire Umuhoza. Buisman had arrived in the country’s capital Kigali on May 14, 2016, to consult with Ingabire regarding the appeal of her conviction for terrorism, inciting popular revolt and minimizing the 1994 Rwandan Genocide.

The appeal is now before the African Court of Human and Peoples’ Rights in Arusha, Tanzania, which is independent of the Rwandan government and judiciary. Though the government prevented Buisman from obtaining a visa and meeting with her client before a March 4, 2016, court hearing, it finally granted a visa that allowed her to enter the country on May 14.

On Monday, May 16, 2016, Buisman went to the Kigali Bar Association to complete routine administrative formalities before meeting with Ingabire. On Wednesday, May 18, 2016, Buisman and Ingabire’s Rwandan defense counsel, Gatera Gashabana, tried in vain to meet with her.

Prison authorities told them that they were too busy to allow them access to their client. When Buisman insisted, prison authorities advised her to request assistance from the Ministry of Foreign Affairs, although, theoretically, it has no influence over the judicial system.

Buisman realized that this was just another bureaucratic dodge, but she nevertheless contacted the Foreign Affairs Ministry via her own country’s embassy in Kigali. Rwandan authorities then ordered immigration services to detain her. After an intimidating, nearly four-hour questioning session, the immigration authorities served her with an order to immediately leave the country or suffer very serious consequences.

Her expulsion calls to mind the sad experience of American Peter Erlinder, Ingabire’s first lawyer, who was arrested and detained in Rwanda, then released and expelled three weeks later after pressure from U.S. authorities. It further demonstrates that there is no justice for Ingabire or for other political prisoners in Rwanda.

Desperate to mitigate press and official condemnation of this embarrassing incident, the Rwandan regime is using the excuse of an alleged “irregularity” in Buisman’s visa to expel her, even though Buisman had no problem entering and staying in the country until she insisted on meeting her client. Her expulsion further diminishes the credibility of the Rwandan judicial system and that of foreign courts keen to honor that system’s extradition requests, particularly in Canada and the Netherlands.

It demonstrates that there is no justice for Ingabire or for other political prisoners in Rwanda.

The political party FDU-Inkingi is shocked by the double standards applied in democratic countries that claim to be tireless advocates for fundamental human rights in the world.

The Rwandan regime has always claimed that it had overwhelming evidence against Ingabire. However, once it faced a test of that evidence by an independent tribunal, the African Court of Human and People’s Rights, it withdrew from the court’s jurisdiction and obstructed Ingabire’s defense team.

The political party FDU-Inkingi calls upon all donors to Paul Kagame’s Rwandan regime, including the Netherlands, Germany, the United Kingdom and the United States, to acknowledge that Rwanda’s judicial system is bankrupt. Any foreign taxpayer money that is spent on attempts to cover this up would be better spent in the search for a political compromise, including release of Ingabire and all political prisoners, opening of political space, and restoration of trust between Rwanda and its neighbors, most notably Burundi and the Democratic Republic of the Congo.

The political party FDU-Inkingi calls upon all donors to Paul Kagame’s Rwandan regime, including the Netherlands, Germany, the United Kingdom and the United States, to acknowledge that Rwanda’s judicial system is bankrupt.

This would not only benefit the people of Rwanda and the African Great Lakes Region but also prevent foreign investment in Rwanda from disappearing into the quicksand of an unstable, illegitimate regime. Donor nations who continue to ignore abundant evidence of the regime’s tyranny are complicit in the people’s suffering and in any consequent regional violence and instability.

FDU-Inkingi Commissioner for External Relations and Spokesperson Justin Bahunga can be reached at jbahunga@yahoo.co.uk. 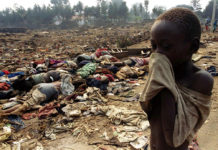