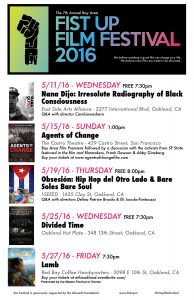 This week the seventh annual Fist Up Film Festival will be wrapping up with a free screening of “Divided Time” on Wednesday at the Oakland Hot Plate at 7:30 p.m. and a screening of “Lamb” on Friday at 7:30 p.m. at the Red Bay Coffee House in Oakland. The Fist Up Film Festival is arguably the best film festival in Northern California, when it comes to documenting international youth culture.

Through this festival, in the past, I saw amazing films about youth in Cuba, Ghana and Columbia, to name a few of the countries represented. If you are free this week and you would like to watch some culturally rich cinema, this is where you need to be.

I sat down for this Q&A with Eli Fauntauzzi-Jacobs, the co-founder and director of the Fist Up Film Festival and a prolific international filmmaker. Check him out in his own words.

M.O.I. JR: Can you tell us how the Fist Up Film Fest started? When?

Also I saw how the film festivals charge filmmakers money after years of work. Most festivals expect filmmakers to find our own way to the festival and then charge people money to see the film we made. So you’re paying money; they are making money – all with the hopes that you are going to get a Hollywood distribution deal.

We believe not all films are made for Hollywood, we believe watching a good film can change your life and we believe some films are made to be discussed. At our festival, we aim to screen films for free – or as close as possible – and be open to the public.

We charge no submission fees to filmmakers and many times have even been able to pay filmmakers through local grants. This year we had the generous support of the Akonadi Foundation.

Eli: The purpose of our festival is to utilize people’s stories documented around the world, as a way to expand community awareness around issues of social responsibility and cultural identity. We also intend to bridge cultural and generational differences in order to build mutual respect and understanding. Our festival will show how films can be used to empower people and inspire positive change.

M.O.I. JR: What is still to come with this year’s film fest? 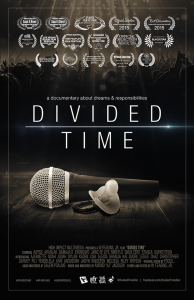 Eli: This Wednesday evening, May 25, 7:30 p.m., come see “Divided Time,” screening at the Oakland Hot Plate, 348 13th St., Oakland. We’ll have a special talk back discussion led by one of my favorite MCs who is a great father of two, Dre-T from Sacramento. The film is directed by William Feagins Jr., who says: “I created ‘Divided Time’ in honor of my father but also to offer an alternative to the negative imagery and stereotypes that are often associated with hip hop artists and Black men in general. At the core of it all, this documentary is about love and sacrifice.”

On Friday, May 27, 7:30 p.m., “Lamb” screens at 3098 E. 10th St., Oakland. “Lamb” is Ethiopia’s first selection in the Cannes Festival, and it’s brought to you by Matatu Festival of Stories and Fist Up Film Festival. “Lamb” tackles the issues of displacement and loss in the form of a young boy, Ephraim, who is sent by his father to live with his extended family far from home. Ephraim’s best and only friend is a lamb called Chuni, but his uncle wants to slaughter the lamb for a religious festival. The clock is ticking for an unlikely cinematic pairing. Director Yared Zeleke was born in Ethiopia and studied cinema at New York University. Buy your ticket here: http://ethioakland.eventbrite.com.

M.O.I. JR: As a filmmaker, why do you spend so much of your time overseas recording? What intrigues you about foreign lands?

Eli: My pops dodged the Vietnam draft and traveled around the world playing music. My mom was an activist and left the country after the 1968 Democratic National Convention. They met in Amsterdam, where they were part of traveling artist collectives. So I think traveling and music is in my blood.

I also know that traveling out of one’s country is a privilege that not everyone has and I have always been interested in how to share that experience and the life changing stories I hear with my community back home. Filmmaking for me has become that tool.

Eli: I have done hundreds of films to date. Most of them focus on youth culture from around the world.

Some of the most acclaimed ones are “Inventos: Hip Hop Cubano,” which was the first documentary about the Cuban Hip Hop movement. Another one is “HomeGrown: HipLife in Ghana” that follows the group VIP, who are still at the top of the charts in Ghana, now called VVIP. The music genre they helped get popular is now found everywhere from Drake’s new album with Wizkid from Nigeria to Beyoncé’s dance moves on stage.

The last film I will mention is “Weapons of Misdirection” that I helped shoot and edit and for our work we won a webby award. That was an amazing interactive film project I had the honor to be a part of.

Eli: The home to all my work is FistUp.Tv and it is also an ongoing blog that has short video portraits. It was created to continue turning people on to good music from around the world.

We have created over 25 episodes and in 2016 partnered with LatinoRebels.com. Our YouTube channel, ClenchedFistPro, has over 1,350 subscribers and 3,213,000 views. “I Want to Live” is a project that I created short films for and is calling for an end to dehumanizing men of color. It also calls for people to share their story and become part of the solution – an interactive film project.

“Revolucion Sin Muertos – Revolution Without Death” is a feature documentary I am working on about youth in Colombia fighting peacefully for a better future using music and culture as their weapon. Tengo Talento is a five part short film documentary series exploring Cuba’s artistic talent in jazz, hip hop, folklore, dance, poetry and painting.

M.O.I. JR: I am most interested in seeing the film about Obsession, the Cuban hip hop group. What is that film about? Who created it?

Eli: “Obsesión: Hip Hop From the Other Side” is about Magia Lopez and Alexey “El Tipo Este.” They are pioneers of hip hop in Cuba and over the last 20 years have promoted expression among youth. They utilize art as a tool to address and eliminate discrimination.

In this intimate documentary, we see their creative process, their challenges in upholding duality of masculine and feminine perspectives, and their outreach to elders in their community, who are often subject to neglect and abuse. They are an example of altruism through the arts in a political landscape that is quickly changing.

The film was created and directed by Kimberly Bautista, a Colombian-American filmmaker and consultant based in Los Angeles. She has produced documentaries, music videos, TV segments and created the award-winning documentary “Justice for My Sister.”

Kimberly is a member-owner of New Day Films, an educational distribution cooperative run by over 100 filmmakers nationwide. She is the founder and executive director of the non-profit arts organization, Justice for My Sister, which promotes gender equality through leadership development for participants throughout Southern California and Guatemala.

M.O.I. JR: Since you cover youth culture in your films, do you ever think that international hip hop will become popular in the U.S.? Why or why not?

Eli: I see international music taking center stage more and more. Like I mentioned, Drake is working with Wizkid from Nigeria. I mean, even Justin Bieber’s song “Sorry” – the beat is straight out of the Caribbean.

I think international hip hop is already famous in the U.S. I have been following Lady Leshurr from the U.K. forever and now her song is being used in the new Galaxy commercials. I think the bigger question is, can it become more popular without having to be pop?

M.O.I. JR: Where can people get more info?

Eli: Please follow our projects and see what we are up to on social media @FistUpTv and our website at www.FistUp.Tv.