We read with amazement Matier and Ross’ announcement in the Sunday, May 15, Chronicle that San Francisco Mayor Ed Lee is “in talks with George Lucas” about “housing his collection of illustrative art and Hollywood memorabilia” on “a site already approved for redevelopment on Treasure Island.”

Then, we thought, No! It does not necessarily follow that the genius who conceived the “Star Wars” saga would grasp – or that Mayor Lee told him – that the place is thoroughly saturated with weapons grade chemicals and radioisotopes with half-lives of never, like plutonium and cesium 137, and that the Navy is not doing a really bang-up job of digging the poisonous stuff out.

Especially suitable, Matier and Ross observe, is the “preferred site (which) has emerged on the west side, facing downtown.” These columnists must know by now that the back quarter of the island is where the Navy built housing for military families after grading soil from burn pits and incinerators.

As a result, that dirt was filled with chemical break-down products – arsenic, lead, dioxin, PBCs, PAHs, DDT, benzene and petroleum from fire training schools and gas stations – in sufficient quantities to sizzle human DNA. It is so toxic that it is targeted for “limited land use” – no residents, no buildings. Calling it “wetlands and wildlands,” the EPA has deemed it suitable only for hiking, biking, running – and picnicking, although I wouldn’t want to lounge around in the deceptively green grass with my kids on a blanket.

I suppose you could put a museum on top of all that deadly stuff. However, there is a danger of toxic gas building up inside structures which then could poison visitors before exploding. If Lucas wanted to fabricate an homage to his “Star Wars” Death Star, Treasure Island would be the perfect place, observed current resident Kathryn Lundgren wryly.

There is a danger of toxic gas building up inside structures which then could poison visitors before exploding. If Lucas wanted to fabricate an homage to his “Star Wars” Death Star, Treasure Island would be the perfect place.

We don’t think they informed Lucas that poor, Black and Brown people and low-rate renters were enticed to move into that western site’s old townhouses after 1997 when Navy families moved out. Or that both former Navy and present day civilian residents have developed internal and external cancerous tumors suspicious for radiation and chemical exposure.

The Navy has not sufficiently cleaned Site 12 to render it suitable for redevelopment. Before TIDA or Navy officials read this article and inform Lucas otherwise, one hopes he will jump into his chauffeur-driven, black-tinted SUV, join the security cars cruising the place and behold all the yellow triangle radiation signs before they are snatched off the green-tarped exclusion zone fences.

If Lucas views the upper left-hand corner of this Navy map of Treasure Island cleanup, he will see a small bullet-shaped figure. That is the icon for the Pandemonium II, a mock-up vessel which, until the 1980s, was used to train sailors to hose cesium-137 into the groundwater.

Navy cleanup officials will tell Lucas, as they told me, No! We left triangle signs there not because of radiation-soaked soil from the Pandemonium, but because we laid down black visqueen plastic to scan low level radiological objects from other sites. Consider, however, all the well-documented historical instances where the Navy “has not come fully clean” and that, like Lady MacBeth’s black spots, liquid radiation can never be washed away.

The huge Moby Dick in the middle of the Bay has always been: When the City needs to clean out sick Site 12 inhabitants for redevelopment, where will they put them?

If what the Navy, the City and Lennar Corp. did to people living near Hunters Point is any indication, the people of Treasure Island were sold a pig in a poke and will get a raw deal. Word comes from a university study group that Lennar is in cardiac arrest because, in their Hunters Point condos, radiation levels are equal to one x-ray a month.

In Lennar’s new Hunters Point condos, radiation levels are equal to one x-ray a month, according to a university study group.

So far, the answer has been that TIDA will either harass Treasure Island residents until they can evict them or they move out or offer them housing behind fences encircling dirty clean-up zones.

Let’s move them to houses behind cleanup zone fences

Before LaShawndra Price-Breston moved to Treasure Island, she lived in Hunters Point, where she conducted Hazmat training for radiation workers cleaning up the Naval Shipyard. She recently became the mother of a baby boy, a new addition to her family.

She and several attendees to a Wednesday, March 30, 2016, Navy meeting live in 1100 series townhouses on Reeves Court, the first to be built for Navy personnel, beginning in 1967. Their residential infrastructure is old and broken down.

Additionally, they are situated next to Halyburton and Bigelow Courts, little townhouse circles so toxic that civilian families were barred from moving in when the Navy officially left the island in 1997. These two courts have been surrounded by green tarp fencing for the entire 19 years that some families have lived mere feet away. 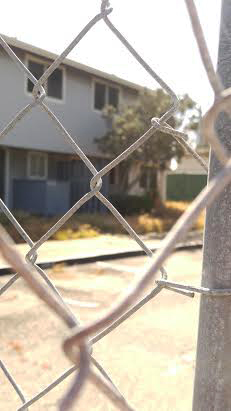 At the March 30 Navy meeting, out of context with the intended subject matter, arsenic-petroleum cleanup from the westside solid waste disposal area, Project Manager Bryce Bartlema mentioned briefly that, during the upcoming summer, the Navy planned to demolish the Halyburton Court houses. Toxin-laden dust and asbestos fibers released by demolition could further compromise the health of these families, their infants and children.

Inhabitants of the Reeves Court complex have been sick with diseases suspicious for radiation and chemical exposure – asthma, hair loss and the lower extremity swelling that accompanies lupus, systemic lupus erythematosus (SLE).

Inhabitants of the Reeves Court complex have been sick with diseases suspicious for radiation and chemical exposure – asthma, hair loss and the lower extremity swelling that accompanies lupus, systemic lupus erythematosus (SLE). Now, the Navy is offering these Reeves Court families homes inside a North Point Drive remediation area.

A week before the March 30 meeting, these mothers living in the aging Reeves Court townhouses across the fence from Bigelow and Halyburton Courts were mistakenly informed by a maintenance worker (who has since been fired) that their homes would be torn down within three months. LaShawndra and her neighbors attended the March 30 meeting to learn what the Navy had to say about the terrifying threat of looming eviction.

Imminent redevelopment of the island places this Sword of Damocles over the necks of these long-time island dwellers, who in 2013 anxiously watched as their neighbors were forced to move after radiological objects were found underneath their homes.

In her remarks to the Navy in the public comment period, LaShawndra also mentioned tree roots cracking the ancient, rusty pipes both under and inside their homes potentially allowing groundwater contaminated by Navy spillage and cleanup to flow into their toilets, sinks and showers.

One woman developed a chronic rash on her back where she stood directly under the shower head. The previous year, two large Reeves Court families suffered months-long floods in their adjoining townhouses during which expensive furniture was ruined, and their children waded around in human waste.

The constant stress of living in Reeves Court, unable to move into overpriced San Francisco housing, has made these families cynical about the words and actions of the Navy and other island movers and shakers. LaShawndra openly and fearlessly expressed this suspicion and doubt when she told the Navy cleanup team that they haven’t seen Reeves Court families at many meetings, “and, I think it’s OK for you guys to be honest with us because we don’t believe anything you say anyway.”

Now, shocking word comes from several of these mothers that the Navy is offering these Reeves Court families homes inside a North Point Drive remediation area.

Let’s make them ill and when a resident whistleblower files a lawsuit, hit them with a retaliatory eviction

Kathryn Lundgren, Treasure Island whistleblower with multiple illnesses and mold-induced respiratory disease, has been forced to sleep either in her car or a tent on her patio. She experienced retaliation after identifying major  habitability issues that housing provider John Stewart won’t admit to.

In summer 2014, she had to fight hard to force them to move her to alternative off-island housing so they could clean the mold which has grown back two years later. This time the property managers have made no effort to protect her family.

The bottom line is that residents living on Trash Island wonder if Navy and City powerbrokers who seem to view them as subhumans to be tortured are entirely human themselves.

As one resident put it, the perpetrators should not be given the Hail Mary option of confession just before they hit the pearly gates. She wants them to roast on the spit of their own guilt long before they die and pay the retribution for years to long-suffering Treasure Island tenants.

Perhaps Lucas could consider building his memorabilia museum on another site and use the proceeds to move these beleaguered people to a safe place of their own choosing with low rents and subsidies, and, since they were seduced to Treasure Island by fraud, pay all their back rent. He could also aid the City in funding their medical care and their children’s medical care into the unforeseeable future, since radiation permanently changes DNA.

Otherwise, he could be adding more disease and death to the Death Star that is Treasure Island.