About two months ago, the Frisco 5 made national headlines when they went on a 17-day hunger strike to protest the police murdering Black and Brown people with impunity in San Francisco, to push for the firing of Police Chief Suhr, who has since resigned, and to push for the resignation of Mayor Ed Lee. 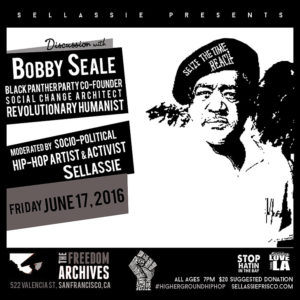 This upcoming Friday, activist and rapper Sellassie of the Frisco 5 will be interviewing Bobby Seale, the co-founder and chairman of the Black Panther Party, in front of an audience. I hooked up this Q&A with Sellassie so he could talk about his experiences with the Frisco 5’s hunger strike as well as his upcoming event with Bobby Seale. Stay tuned.

M.O.I. JR: It’s been a few weeks since you and the other four from the Frisco 5 suspended your hunger strike and transitioned the movement against police terrorism into the Frisco 500. Do you feel like you have been effective?

Sellassie: I’m happy with what we accomplished as the Frisco 5. As far as the Frisco 500, I’m not too clear on what that is. I have an idea on what you think it is, but coming from someone who was involved in the hunger strike as a Frisco 5 member, I wasn’t informed on what it is, so until I’m laced on what it is, its purpose, who’s running it and its goals, I ignore the phrase Frisco 500.

M.O.I. JR: What did you want people to get most out of the hunger strike?

Sellassie: As far as I was concerned, it was to get the police chief out of office, recall Mayor Ed Lee, reform the San Francisco Police Department on its use of force policies and unite the dwindling Black and Brown communities of San Francisco.

M.O.I. JR: How did this Friday’s event with you and Bobby Seale, co-founder of the Black Panther Party, at the Freedom Archives get hooked up?

Sellassie: I had seen Bobby at Merritt College a few months ago and was so inspired by his grassroots effort to mobilize the Black community in the ‘60s, I wanted to get some game from him 50 years later on how to do the same thing in 2016. I’m really interested to start some sort of organization – a group of strong Black men to reclaim the ghetto.

Who better to get some pointers from than the chairman and co-founder of the Black Panther Party, Bobby Seale.

M.O.I. JR: In your one-on-one conversation, what kinds of things do you plan to ask him? What interests you most about him?

Sellassie: Without disclosing too much of the night’s agenda, the reason I wanted to moderate it was to keep the discussion anti-House Negro – no House Negro perspectives, all real Brotha perspectives – on how to save us in these times of the disappearance act of the strong, militant, politically minded Brothas, where envy, jealousy and hatred stop love, understanding and patience. We will tackle some really cool topics concerning the past, present and future of Black Amerikkkans.

M.O.I. JR: What exactly is the purpose of the event? Will the conversation be made into a Freedom Archives product?

Sellassie: No sir to the latter question. To the former, the chance to talk to a champion in Black liberation in a real way, not some so called rap legend, is just amazing for me to even think of. I do things like this, like I was taught by my elders, “Lace your people with knowledge and wisdom, one of the first steps to stay out of the white man’s prisons.”

The Panthers – the knowledge and pride that that organization gave to me to be proud to be Black and that I’ll defend that to the death – shaped me as a Black man in this white man’s world, so it’s an honor to meet the original architect of the organization.

M.O.I. JR: If people would like to attend, how do they go about getting tickets?

Sellassie: Here is the online link, which is strongly suggested: http://bobbysealediscussion.bpt.me/. Or walk-ups are fine. It will be a very intimate engagement; drinks and refreshments will be limited.

M.O.I. JR: What are you working on currently?

Sellassie: I have a new record being released this late summer called “Black Jedi,” 20 tracks I recorded in Los Angeles since February 2015. Really excited about it. I’ll be selling it exclusively out the trunk and through my website.

Making a lot of videos from archival songs of mine, perfecting my visuals. College tour this fall and hopefully some road work with Bobby and the BPP 50th anniversary.