“Kicks,” the first feature for East Bay native Justin Tipping, is a throwback to the harsh brutal ‘80s-’90s, when hip hop was painting landscapes along urban highways. It’s post-everything … urban removal complete – crack, pistols and cars about all that’s left for those who remain. Life is moving fast, so fast boys need their kicks to keep up.

The story centers on Brandon, a petite youth who wants to buy a pair of Classic Jordans – Esu-Legba colors. Black and red, the shoes magically open doors for Brandon. Ignored because he is too short and kind of a nerd, this foot attire has Brandon stepping into multiple landscapes, where his strength is tested, his heart weighed, his options measured. Skateboarding his mode of transport, the kid doesn’t occupy a lot of space – observant, he has a code we imagine his mom instilled in him. He stays out of trouble, finds solace in his music and poetry, yet trouble finds him anyway once he has something other boys (translate young men) want.

If shoes make the man, then these kicks help Brandon attract girls. The fly footwear boosts his ego. Jahking Guillory (Brandon) might be a newcomer to the screen; however, he carries his weight with film veterans Christopher Jordan Wallace (Albert) and Christopher Meyer (Rico).

As Brandon walks home from school one afternoon, he sees men lying in wait for him. They spot his kicks and Flaco (Kofi Siriboe) stomps the boy and snatches the shoes from his feet. Incensed once he can get up, Brandon wants revenge, and so begins his war dance.

“Kicks,” the first feature for East Bay native Justin Tipping, is a throwback to the harsh brutal ‘80s-’90s, when hip hop was painting landscapes along urban highways.

The older boys acting as mentors and protectors for their young friend try to talk sense into him. They know Flaco is crazy, besides Oakland (his turf) is another country they do not know. However, like all hero tales they have to travel.

Brandon is emboldened and stands on principle clad in his mother’s house shoes when he tells his boys he is going with them or without them. Brandon has an uncle there – his mother’s brother, who takes care of Brandon’s grandmother he hasn’t seen in a while. Uncle Marlon (Mahershalala Ali) is surprised to see his nephew; he tests the boy and, seeing that he is serious, gives him a bit of advice.

The Richmond kids and the Oakland youth pile into Brandon’s cousin’s car and go looking for Flaco. On the way the boys have a bit of fun. “Kicks” takes audiences on a Bay Area tour as the boys take in sideshows, house parties – have a little illicit fun … all leading finally to the showdown between Brandon and his nemesis Flaco. 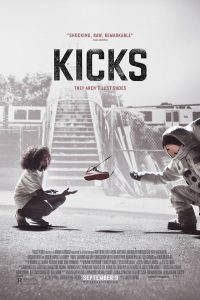 As the characters get hyped on alcohol and drugs with excess adrenaline pumping into wells filled with a hyper-masculinity indicative of iconic American culture, co-writers Justin Tipping and Joshua Beirne-Golden ask the question: Why must we juxtapose manhood with violence? Brandon’s world is rough for both boys and girls. We see the female characters going toe to toe with their male counterparts – a big scene shot when Brandon is on the lam, is entirely improvised, Tipping says. There we witness respect taken when not readily given.

James Baldwin writes of this hostile world in his seminal essay, “My Dungeon Shook.” The author speaks of “a gimmick, to lift him out, to start him on his way.” Brandon’s gimmick is an invisible space man who pumps him up. Baldwin’s is the pulpit. Both Baldwin, 14, and Brandon, 15, put these crutches down. Just like Baldwin, Brandon is “afraid of the evil within and the evil without.”

It is a powerful film with a soundtrack that speaks to the soul as it wanders. The film captures a nostalgia for those who call the Bay home – even those forced out into Pittsburg, Antioch and Stockton or further. Perhaps this authenticity is grounded in the fact that from writing to casting to cinematography, many of the big names are homegrown like co-writers Tipping and Beirne-Golden, Oakland-Bay Area and San Francisco born, to Oakland stars Mahershalala Ali (“Hunger Games”) to Koran Streets, who portrays Brandon’s cousin. Streets’s “Money on My Mind” is a part of the stellar sound track, which also features writing from CJ (Albert), Notorious B.I.G.’s son.

We know these boys, even if they no longer live with us. Malidoma Some, Dagara healer says that identity is contingent on a shared community recognition of the inner accomplishment or “fulfillment of our life’s purpose.” We witness Brandon’s spiritual shift as he climbs the steps to return home. He has more work to do, but he is certainly changed, a change affirmed and even approved by Albert and Rico.

It is a powerful film with a soundtrack that speaks to the soul as it wanders.

“Kicks” is a rites of passage story with multiple metaphors involving Blackness and manhood and the ritual of violence. Brandon does retrieve his sword, but at what cost? It’s currently showing at the Grand Lake Theater in Oakland.