I recently received a form that was generated by the California City Correctional Facility administration. This form notified me that I would not be allowed to read my Bay View newspaper this month.

While this may seem like a clear constitutional violation, CDCR has stipulated by law that no inmate may possess any literature “which contains or concerns plans to disrupt the order, or breach the security, of any facility.”

What California City Correctional Facility administration fails to realize is that inmates communicate across great distances, the same way people in bondage communicated between North America, Africa, South America and the Caribbean during the Atlantic slave trading era.

Therefore, we convicts already know about the nationwide work strike that California City Correctional Facility does not want us to read about.

What California City Correctional Facility administration fails to realize is that inmates communicate across great distances, the same way people in bondage communicated during the Atlantic slave trading era.

Despite the oppressive situation I live in, I would like to further call inmates to refuse to work. Unlike a hunger strike which mostly afflicts prisoners, a work strike afflicts the pockets of the slave master.

American capitalism was built on slave labor and it is maintained through prison labor, which is merely a modified form of slavery.

Refuse slavery. Refuse to work. Otherwise, you shall remain a slave.

I have included a copy of the notification of disapproval so everybody can see how much master fears a revolt. 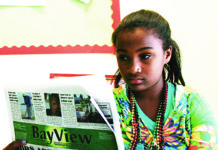