Ten years ago, when the Democrats took over Congress, I wrote a piece begging them to drain the swamp surrounding the Department of Education and the federal student loan system. 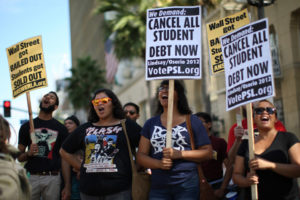 In the absence of standard bankruptcy protections, statutes of limitations and other fundamental free market protections, the student loan system had become a big-government, predatory beast that was wrecking the lives of millions of citizens.

The lending system had captured key members of Congress like John Boehner, Mike Enzi, Buck McKeon and others to make this happen. By 2006 the nation’s student loan debt had exploded to a whopping $400 billion, where the average borrower was being saddled with $18,000 in loans, and both the government and the private lenders were actually profiting on defaults.

The moves that Congress did make, ostensibly to help the borrowers, have failed miserably. The Gainful Employment Rule was a total bust and the various repayment programs put into place are being administered in such a way as to kick as many borrowers out of the program as possible.

Instead of draining the student loan swamp, Congress made it much bigger and deeper. The moves that Congress did make, ostensibly to help the borrowers, have failed miserably.

What is most staggering: Since my article a decade ago, over a trillion dollars has been added to the nation’s student loan bill, and the average undergraduate borrower is now leaving school with over $35,000 in loans.

The Department of Education, whose managers had been found to be holding stock in the very lending companies they were supposed to be overseeing, took the lending program over and now profits some $50 billion per year on the program, and still makes a healthy profit on defaults. Behind the scenes, the department fights tooth-and-nail to keep bankruptcy gone from federal student loans.

President-elect Trump, the nation needs help with this. The student loan swamp will do everything possible to convince you that returning bankruptcy protections will imperil the entire lending system.

This is a lie. Credible experts have estimated that the cost of returning bankruptcy protections to student loans would only be about $3 billion per year. This is nothing compared to the $100 billion that gets lent out every year, or the $50 billion in annual profits that the government makes on the program.

The swamp, which includes an army of experts in and around the Department of Education, members of Congress like Virginia Foxx, Mike Enzi, Paul Ryan and many others, both Republican and Democrat, are very good at scaring newly minted elected officials, including President Obama. They have done it successfully for years and see you as easy prey, I suspect. Please don’t fall for it. I hope you are stronger than that.

Return bankruptcy protections to student loans by repealing 11 USC 523(a)(8). Order the Department of Education to reduce lending limits significantly across the board – or impose meaningful limits where there currently are none. Order the department to kick out the bad schools, which is most of the for-profits, and a significant number of the non-profits.

President-elect Trump, the nation needs help with this. Return bankruptcy protections to student loans by repealing 11 USC 523(a)(8).

Consider not lending for ridiculous or overpriced degrees. Crack the whip on the colleges that remain. This is what true conservatives like the Cato Institute, David Brooks, David Jolly, John Katko and others are calling for. This is what must be done by a courageous, uncompromised president. Fire the entire management chart for the Office of Federal Student Aid if you have to – and you may.

Please stand up to big government. Please think about the founding fathers, who demanded a uniform bankruptcy system ahead of the power to declare war, form a military and even coin currency when they gave Congress its powers. Please stand by the citizens on this, do what you said you would do, and drain the student loan swamp.

Alan Collinge is founder of StudentLoanJustice.Org and author of The Student LoanScam (Beacon Press). He can be reached at justice@studentloanjustice.org, on Facebook or Twitter. This story previously appeared on The Hill.

Learning from the Great Depression