According to the United Nations, 700 million Africans don’t have access to electricity most of the time in rural regions, far from urban zones. The “Fondation Energie,” founded by French political personality Jean-Louis Borloo, and the “Energy for Africa” project sponsored by Guinea President Alpha Conde are inspiring inventors to solve the problem.

The Ecowas (Economic Community of West African States) proposal is a solar lamp for these rural areas. During 2016, two young Africans presented their responses.

It is a backpack provided with a LED lamp linked to a solar smart panel and a photovoltaic battery chargeable by the sun during the day. By night, the user has to connect the LED lamp to the battery with a USB port and study his lessons for five hours. Solarpak is an ecological tool.

Evariste said he alone invested $80,000 dollars to produce 200 Solarpak specimens he offered to students in the villages of Songon and Affery in the south of Côte d’Ivoire, not far from Abidjan, the capital. He works with 15 employees and volunteers.

He related that he was shocked when he saw in many villages that school children can’t study their lessons at night. They use petrol lamps in a five or six-person family. That doesn’t allow them to progress like the children in urban zones.

The young inventor presented his project to the UNESCO representative in Côte d’Ivoire and started negotiations with institutions such as USAID and PNUD. He was recently invited to the COP 22 climate conference in Marrakesh, Morocco, to promote his invention.

Evariste is trying to raise funds to produce a better version of Solarpak and distribute or sell them largely on the African continent. One Solarpak will cost $25 U.S. or 10.000 fcfa in Côte d’Ivoire. Producing Solarpak in Evariste’s vision could create 100 jobs.

Solutions to the lack of electricity in African rural zones is a priority for engineers in many African countries from South Africa to Togo.

A young Ivorian woman, 24-year-old Delphine Oulai, called “the Ivorian Thomas Edison,” who comes from the Tonkpi region in the west of Côte d’Ivoire, has created an extraordinary LED bulb that lights up in contact with water.

Her team was able to equip it with a battery, made from a carbon rod coated with magnesium powder. It is a hydro-electric battery, that is, it produces electricity in contact with water.

When the electrodes of the cell come into contact with the water, which is electrically conductive, especially when it is saline, an electrochemical reaction occurs on the surface of the electrodes, which generates electricity. This then powers the LED bulb, which lights up.

The bulb diffuses a white luminous halo of 1,200 lumens and displays a power of 15W. It is equipped with a battery with an autonomy of five hours. An intelligent electronic circuit makes it possible to gradually reduce the luminosity in order to optimize its operating time.

A young Ivorian woman, 24-year-old Delphine Oulai, called “the Ivorian Thomas Edison,” who comes from the Tonkpi region in the west of Côte d’Ivoire, has created an extraordinary LED bulb that lights up in contact with water.

Delphine could make only one bulb. She is looking for economic partners to produce more. The LED system lasts 40 times longer than ordinary systems. Life expectancy is estimated at 50,000 hours, a little over six years.

The battery used must be recharged regularly. Once recharged, the bulb can operate for about a week. Like all LED bulbs, it consumes relatively little energy. It can last for six years if used normally and three years for intensive use. The bulb must be recharged once a week.

But Delphine Oulaï has found a solution: to circulate a cart equipped with solar panels in villages so that everyone can recharge their batteries. Ultimately, this lighting system should replace old oil lamps. The lamp would use water instead of fuel.

She said that, moreover, with a potato, copper and zinc, it is also possible to light a bulb.

In Africa, young people are engaging to make life better through independent development.

Abu-Jahlil Astrid Chacha, a freelance journalist and columnist based in Côte d’Ivoire, West Africa, can be reached at abujahlil@yahoo.fr. 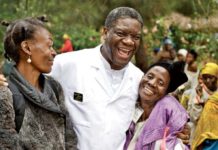