Tyrone Chalmers started drawing at age 8. “Art shadows me everywhere I go in life … my best work comes from within my dreams.”

Chalmers is a passionate and committed artist. He is also a convicted murderer on death row. In handwritten letters to Guardian Australia sent from Unit 2 at Riverbend Maximum Security Institution in Nashville, Tennessee, he and fellow inmates describe what art means to them.

For Harold Nichols, who received a death sentence for the rape and murder of a 21-year-old woman in 1988, it’s all about the act of creation. “When I start with a blank paper or canvas and begin to make lines and marks and see these congeal into a reasonable form, this is the true moment when I have created something from nothing.”

From expressing spirituality and identity to creating a meditative focus, art takes on a heightened value inside prison.

For inmates such as Donald Middlebrooks, it also provides therapy and a form of penance. He was convicted of the torture and murder of a 14-year-old boy. Art, says Middlebrooks, “is the way I express my pain from childhood abuse … [it] allows me to escape.”

Chalmers is a passionate and committed artist. He is also a convicted murderer on death row. He and fellow inmates describe what art means to them.

Their studio? A large cinder block prison building where, every Thursday night, they gather around two large tables.

Since 2013, they’ve been taught by Robin Paris and her colleague Tom Williams, professors of art at Watkins College of Art, Design and Film in Nashville. Over that time, their work has been shown in five art exhibitions in Tennessee and one at the Apexart Gallery in New York.

For that show, Life After Death and Elsewhere, poignantly, they created their own memorials: a rose, a spiral of books, a diorama of feathers and animal figures, an aeroplane with a painted skull, a ceramic tree.

What is death row like? Peaceful, says Williams: “Despite stories about death row being filled with ‘the worst of the worst’, these men get along with each other, and it’s easily one of the safest units in the prison.” Paris says a group of six men have formed the core for the past three years although “there have been as many as 15; some have dropped out and two have died [of natural causes].”

In the U.S., art has become a new weapon in the battle for hearts and minds over the justness of the death penalty – an increasingly heated and polarizing issue touching on not just the ethics and morality of state-sponsored killing but prison reform, class and the inequities of the justice system.

Through art, a coalition of artists, educators and activists hope to humanize the plight of prisoners and sway public opinion. Organizations include REACH which provides workshops to Tennessee death row inmates, Minutes Before Six (MB6), a blog by death row inmates dedicated to using arts and literature as a form of rehabilitation, and Art For Justice.

Through art, a coalition of artists, educators and activists hope to humanize the plight of prisoners and sway public opinion.

In some cases, the human body itself has become a political tool in this debate. In a macabre twist, Texas death row inmate Travis Runnels has given his consent for his body post-execution to be donated to Danish activist Martin Martensen-Larsen to be painted gold and preserved as part of an installation.

In 2012, the ashes of another executed convicted murderer from Texas, Karl Eugene Chamberlain, were exhibited as part of an installation by Martensen-Larsen in a Danish church. 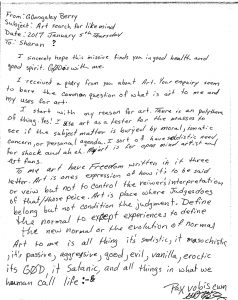 Windows on Death Row, a travelling exhibition of over 60 works from death row inmates and some of America’s most famous political cartoonists, is currently on show at Ohio State University, while London-based artist Nicola White, founder of ArtReach: Reaching out with Art from Death Row – a project featuring a website of art by San Quentin inmates for sale, with proceeds used for victims of violent crimes and to buy art supplies – plans four new shows of prisoners’ work this year in London. Her Twitter feed @DeathRowArtists provides a lively commentary on the art of San Quentin prisoners.

And in Sydney, a show of over 100 paintings by executed Bali Nine member Myuran Sukumaran, Another Day in Paradise, has just opened at Campbelltown Arts Centre, organized by artist and co-curator Ben Quilty, who was Sukumaran’s mentor and teacher until Sukumaran was executed in 2015.

Why have these artists and educators become involved? For Williams, formerly a death penalty supporter, it is to provide a voice for the voiceless. He adds: “If we’re going to kill these men, then we should be willing to listen to what they have to say.”

For White, who has worked with more than 25 San Quentin inmates since 2015, art and self-expression is a basic human right that provides dignity to the condemned. These men are human – often showing “extraordinary talent” – not monsters, she says. Art can act as a powerful political weapon by putting a face and story to these lives.

Why have these artists and educators become involved? For Williams, it is to provide a voice for the voiceless. For White, art and self-expression is a basic human right that provides dignity to the condemned.

White quoted Sister Helen Prejean, a Louisiana-based campaigner for death row prisoners and the families of murder victims, and an advocate for the abolition of the death penalty. “When she met a death row prisoner she had been writing to for the first time, [she] said, ‘When I saw his face, it was so human, it blew me away. I got a realization then, no matter what he had done … he is worth more than the worst thing he ever did.’”

For many, art has provided a form of personal rehabilitation. Quilty points to Sukumaran, and his journey from drug-runner to sensitive and self-knowing artist. White cites former Crips gang member Steve Champion, who has been on death row since 1982, age 18; he is now a self-educated author.

In some cases, Robin Paris explains, their guilt itself is in question; she cites a spate of recent death row exonerations – including that of Ndume Olatushani, “a man who was on death row for 22 years, was exonerated, and says that painting and art literally saved his life. He now leads a full and powerful life outside of prison.”

But even for those whose guilt is beyond question, their advocates believe it is important to highlight the issue of how race and class twist legal outcomes: Those on death row are overwhelmingly poor and of minority background. As Paris says, “There are no rich people, to my knowledge, on death row.”

A majority of death row inmates also come from backgrounds of terrible childhood abuse and deprivation. What would their lives have been like if they had been offered the chance to be creative, to express themselves through art, to have an education, asks Quilty, who believes art therapy should have a much bigger role in the “dehumanizing” Australian prison system.

For many, art has provided a form of personal rehabilitation.

“We have seen these changes in them,” says Paris. “The question I keep asking is why can’t that happen earlier, in school, in our communities? The meaning and insight these men have made come with the opportunities that a good, working social and educational system would provide. It wasn’t there for them.”

Quilty hopes the show will help change minds about the death penalty. “Myuran was very aware that there was an end point to his creative output and that end point is a profound metaphor for how stupid and violent and evil execution is.”

Sharon Verghis is an Australian journalist who has written widely on arts and culture for publications ranging from The Australian to TIME magazine. She can be reached via Twitter at @SVerghis. This story first appeared in the Guardian.