by Tiny and Tibu, POOR Magazine and Deecolonize Academy

“What is your name,” a mechanical-sounding voice shouted through the receiver of my phone. Before I could answer this bizarre beginning to a call, he added, “What is your address? Where do you work? Do you have any other phone numbers?” The barrage of accusatory questions with no basis continued for several minutes with me barely able to get a word in edgewise, and then, “Do you have a 13-year-old son?” With this sentence, my heart began to race, my eyes started to blur and the room began to warp.

After 15 more minutes of terror, I figured out that this was a cop calling me. He had my 13-year-old son, Tibu, who he had “detained” at West Oakland BART for doing nothing wrong.

This was a cop calling me. He had my 13-year-old son, Tibu, who he had “detained” at West Oakland BART for doing nothing wrong.

For the last month, Tibu has been going to different Bay Area locations, three days a week, from 6-8 a.m., before school, distributing Decolonewz, the school newspaper for Deecolonize Academy, a liberation school for children in poverty, where Tiburcio is enrolled. He has been doing this as a good son, to support his low-income single mama (me) and his very grassroots school, both of which are struggling financially. He did nothing wrong, in fact he did everything right.

“It’s not normal for a 13-year-old to be selling newspapers,” the cop kept shouting over the phone to me, after he “confirmed” that everything my son had told him was true. And then, “I’m just worried about his welfare! and why you as a parent allowed this. I believe your parenting is in question,”

Later that night at the BART Board hearing

“We are just trying to respond to complaints about aggressive panhandlers,” said the nameless BART police representative to the BART Board and the tiny sprinkling of regular people in the audience.

On the same day as my son’s harassment by West Oakland BART police, there was a BART Board hearing. I am not sure which police-terrorized ancestor spoke through me when I suggested West Oakland to my son as his destination that morning, but they did and I did; and so instead of going to the Rockridge or Downtown BART stations, which he had been going to without incident, he walked into a trap.

We realized after he came home that he walked into a “snare” set for newspaper sellers – aka poor peoples of color exercising their constitutional rights to free speech – all of whom the BART police had profiled as unhoused and aggressive panhandlers.

Right before the cop detained my son, Tibu was given tips on the best location to distribute by fellow newspaper sellers at the West Oakland station, a location of constant police harassment, which, like most poor people of color neighborhoods, is over-policed and under constant attack by the paid agents of the state.

The first series of questions he was asked by the cop who profiled him as “a runaway” – code for houseless youth – and then proceeded from there to continue to repeat the same questions about his school, his address, his mother’s name, his reasons for being here, repeatedly trying to trip him up.

The cop profiled him as “a runaway” – code for houseless youth.

As myself, my son and other youth skolaz from Deecolonize Academy and POOR Magazine stood together at the BART hearing, we listened to a stream of racist, classist comments about unhoused people said as though it was common practice to speak of poor people selling newspapers as though they weren’t human, had no voice and no right to speak for themselves.

The concept of “panhandling” is the nexus of racist and classist American profiling. It is a highly charged and misunderstood issue that us poverty skolaz at POOR Magazine hold a completely different perspective on and always have.

In 1998 my mama launched the WORK issue of POOR Magazine to look at and document different forms of unrecognized labor, like recycling, welfare-demanded work, mothering, street newspaper selling and panhandling itself. First of all, it’s a constitutional right to free speech that Tibu and the other newspaper sellers are exercising, something the youth skolaz are learning right now in their oppressed People’s Herstory class at school.

It’s a constitutional right to free speech that Tibu and the other newspaper sellers are exercising.

So clearly Tibu unintentionally proved these low-income men of color are being harassed and this harassment should be renamed, selling newspapers while Black, Brown, Poor or Young in America.

But even the notion of straight up panhandling is labor, as my mama Dee proved in issue #3 of POOR, a form of micro-business, in fact. When myself and my mama used to be street vendors, which we were for most of my poverty stricken, houseless childhood, we had the same “day” in terms of “sales” as our humble panhandler brothers and sisters sitting next to us on the streets of Oakland and San Francisco. And just like poor people recycling, it is completely raced and classed, depending on who is doing the selling, distributing, asking or soliciting.

When people go door to door asking for donations for a political campaign, religion or other campaign how are they really different form panhandlers? And how is it that just because peoples don’t have access to a roof or their business is associated with living outside, people feel entitled to judge what they do with their income.

Why don’t we ask CEOs at Chevron and other mega-corporations what they “do with the money” and whether they are going to spend it “all on drugs,” the same way we demand to know what panhandlers do with their money. How is it that corporate recycling companies get million dollar contracts to pick up recycling but when independent contractors who might be unhoused recycle, we accuse them of “stealing our trash” like anyone can steal trash anyway. (That’s a WeSearch study conducted by POOR in 2006.)

Why don’t we ask CEOs at Chevron and other mega-corporations what they “do with the money” and whether they are going to spend it “all on drugs,” the same way we demand to know what panhandlers do with their money.

My advice always to people on their conundrum about “giving money” to unhoused people is, if you have it and are able to buy a paper or support a brother or sister on the street, do it. Stop feeling entitled to a story about what they are doing with the money.

Panhandling is a very hard job, not unlike any kind of sales or solicitation work with a multitude of “cold calls” – one of the hardest jobs anyone can have. So just leave it at that, and if you don’t want to or don’t have the money to support, then don’t.

Back at the BART meeting

Jennifer Friedenbach and other members of the Coalition on Homelessness, along with DeeNa and Oscar Salinas from the Justice for Nate Greer Coalition, were also present to speak on BART’s use of force policies and their relationship to the murder of Nate Greer and other Black, Brown and disabled peoples.

I knew that ancestors called us into this because everything about the meeting was wrong. The weird “diversity” training video presented by the cops, showing two middle class women, one Asian, one White, in a 2016 Prius fighting with each other, which was supposed to show diffusion tactics to new BART police officers couldn’t train anyone on anything except maybe the newest fashion for 30-something business ladies.

The BART building itself, which is almost impossible to get into and once you get in, you can’t find the location; and it’s completely ableist, with no bathroom access, making it almost impossible for our youth skolaz to be in the meeting because they couldn’t use the bathroom without getting locked out of the meeting room.

We did manage to speak, thanks to Jenny who had to make a special request for public comment, and I knew it was necessary for this board to hear real poor people in the flesh speaking up against this over-policing, for my son’s healing, and for his brother and sister comrades at Deecolonize Academy to report and support on.

I know sis-STAR Lateefah Simon was voted onto the BART Board and, as I told her in a text message that day, she has so much work to do. We all do.

Tiny – or Lisa Gray-Garcia – is co-founder with her Mama Dee and editor of POOR Magazine and its many projects and author of “Criminal of Poverty: Growing Up Homeless in America,” published by City Lights. She can be reached at deeandtiny@poormagazine.org. Tibu, her son, is a student at Deecolonize Academy, also founded and led by Tiny. Visit POOR at www.poormagazine.org. 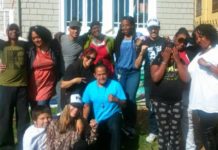