Our dear brother and Black Panther comrade Sekou Kambui (s/n William Turk) made his transition May 9, 2017. The struggle for freedom defined him in so many ways. After 47 years as a political prisoner in Alabama prisons, and his release in 2014, he can now rest in peace. Farewell, my dear friend. – Audri Scott Williams

We will never forget you, Sekou Kambui. Thank you for being an inspiring part of our lives and your relentless commitment to struggle. We miss you deeply. #RestInPower – Denver ABC

Sekou Kambui: Life after 47 years as a political prisoner

It has been two years since Sekou Kambui was released from the Alabama prison system after spending 47 years of his life incarcerated. He and fellow human rights activist Audri Scott Williams spoke in Denver on July 14, 2016, at an event hosted by Denver Anarchist Black Cross about his life after prison and their current collective work.

During his teenage years in the 1960s, Sekou participated in the civil rights movement through mobilizing fellow youth in Alabama and providing security for meetings of the Southern Christian Leadership Council (SCLC), Congress for Racial Equality (CORE) and the Student Non-Violent Coordinating Committee (SNCC).

When Sekou was 19 years old, he became affiliated with the Black Panther Party for Self-Defense as well as the Republic of New Afrika. In the 1970s, Sekou spent most of his time community organizing in Birmingham, Alabama, with the Alabama Black Liberation Front, the Inmates for Action and the Afro-Amerikan People’s Party.

Because of his activism in the civil rights movement, he was watched closely by the FBI’s counterintelligence program entitled COINTELPRO and was subsequently profiled and pulled over on Jan. 2, 1975, for allegedly running a yield sign and/or speeding. During the traffic stop, the officer found a pistol in Sekou’s vehicle, and after strong suspicion by the officer that it was the weapon listed as stolen during a Tuscaloosa, Alabama, murder, Sekou was taken into custody and charged for the murders of two white men – a fireman and KKK official Olmstead Copeland and multi-millionaire oilman John Harbin.

Throughout both trials, major witnesses admitted that they had been coerced into testifying falsely against Sekou and were repeatedly visited by certain members of the Tuscaloosa County and Jefferson County sheriff’s departments and were deliberately coached on what to say during their testimonies.

Sekou was never placed at or near the crime scene, the real murder weapon was never found, nor was there ever any direct evidence to connect him to the murders.

While in prison Sekou remained politically active by becoming a jailhouse lawyer and prisoners’ civil and human rights activist. Many prisoners owe their freedom to Sekou’s legal efforts on their behalf. He has won numerous civil actions regarding medical malpractice, abusive treatment, abusive segregation and abusive prison conditions.

Sekou explains his motivation for becoming a jailhouse lawyer: “Once I entered prison, what was I going to do but do the same thing I did out of prison? And that was organize – fight the powers that be for a better life and quality of life.

“The prisons were overcrowded and people in beds were about as close as arm-to-arm. It was filthy and the food was bad. A lot of times you’d find feces from some animal or another—mice, roaches, whatever. You’d break open a piece of cake and it had been invaded by spiders and you’d just pull it and spider webs would come with the cake.

“So we had a lot of work to do. As I was becoming an up-and-coming jailhouse lawyer, I began to attack and challenge those things, and with some success. And out of their success, I became notorious throughout the prison system as one ‘leave-him-alone’ litigator.”

Since his release on June 30, 2014, he has relentlessly continued his Civil and Human Rights activism by touring nationally with The Red Flame for Freedom. The organization’s main goal is to raise awareness about the proliferation of modern day slavery experienced through sex trafficking, human trafficking, mass incarceration and children in poverty.

“Going back to prison is not on my agenda. It’s not an option to be considered. But I’m not going to stop doing what I’m doing. And I’m going to take every breathing moment I can to get out and propagate truth and reveal the lies about what’s going on behind prison walls,” Sekou added.

Audri Scott Williams, one of the founders of The Red Flame for Freedom, spoke about her lengthy and expansive international and national human rights activism. Since 2000, she has participated in and organized many walks for social justice change, the environment and for many more causes.

During the Q&A dialogue, Audri added: “It’s that relentless pursuit of what calls you, all right, and believe me you wouldn’t be sitting here if something wasn’t calling you. We’re living at a time now where the issues are so big and so broad that you can literally just pick one and go for it. The biggest challenge is not whether there’s something you can align with; the biggest challenge is you must know that you can make a difference.”

Sekou is also involved in the Free Alabama Movement, which is an organization formed by people in men’s prisons in Alabama to fight mass incarceration and prison slavery “that supports the non-violent and peaceful protests for civil and human rights by the men and women (and children) who are incarcerated in Alabama, Mississippi, and anywhere else in the USA.”

The portion of this story headlined “Sekou Kambui: Life after 47 years as a political prisoner” was first published by Unicorn Riot. That portion plus the initial quotes first appeared on Denver ABC. 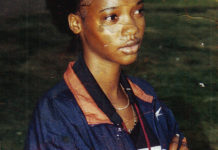