One of the best indie films with a street edge and a message in the 2017 San Francisco Black Film Festival that deals with human trafficking is called “When Love Kills.” It is definitely a must see. As the father of a young Black teenage girl living in the ‘hood, I see “When Love Kills” as a teaching tool on what happens in the streets and what the streets will do to pretty young gullible girls.

Mouthpiece and a few gifts is all it takes to ruin some people’s lives; that’s one of the lessons ingrained in this cinematic masterpiece. I have watched over 100 films made this year and last year, and this is definitely among the cream of the crop. Check out screenwriter Cas Sigers-Beedles as she gives us some of the ins and outs on making this film.

M.O.I. JR: What inspired you to write the screenplay to “When Love Kills”?

Cas Sigers-Beedles: I read an article in The Creative Loafing about Falicia Blakely and the case. I became intrigued about a young girl who could be so hoodwinked into believing this guy would love her. I did research and went to visit and was even more intrigued with her story.

When I discovered that there were so many girls in Atlanta that get caught up with dancing and pimps, I was flabbergasted. I knew the story had to be told.

M.O.I. JR: How long did it take from the time of first starting to write the script to the end of post-production?

Cas Sigers-Beedles: I first wrote this script in 2004-2005. I tried to find funding for about two years and then put it on the back burner. Occasionally, over the years, I mentioned it and got interest, but it went nowhere.

While in Puerto Rico shooting another TVOne project, I overheard my executive producer mention Falicia Blakely and her story for their crime series. I told her about the script and she wanted to read it.

From her reading, it took about four months to greenlight, and we went into production the following year. So in total it was over a decade, but once it started moving it was less than two years.

M.O.I. JR: What message do you want people to walk away with from this film?

Cas Sigers-Beedles: This really is a tragic story about unrequited love. I would want young girls to see how desperate Falicia was to receive this so-called love and realize that this isn’t a lifestyle that pays. Many girls come to big cities in search of fame and fortune and get caught up in bad situations with men who promise the world. I pray this will be a cautionary tale for that young lady.

M.O.I. JR: The relationship between the main character and her mother was intense and complex. Was it based on a real person or people?

Cas Sigers-Beedles: Yes, everything was loosely based on the relationship with Falicia and her mom. It was rocky, but eventually it developed into something more loving.

M.O.I. JR: Did you consciously create the characters where you couldn’t love them or hate them?

Cas Sigers-Beedles: I tried to be as true to the real characters as possible. But I think the best characters are ones that are humanly flawed.

True, most people can’t identify with being a murderer, but I think most can identify with desiring a love so bad that they would compromise themselves for it. I want people to be conflicted when seeing this. As much as Falicia is in the wrong, I still want people to empathize with her.

M.O.I. JR: Why did you incorporate human trafficking into the story? Is this an issue that is close to your heart?

Cas Sigers-Beedles: I incorporated the human trafficking element because that is what was going on at the time. It was a part of Falicia’s story. It is very relevant, living in Atlanta, because we have a very large problem with human trafficking and, as a mother of a daughter, I am always concerned about issues affecting our young girls.

M.O.I. JR: How did you begin in filmmaking?

Cas Sigers-Beedles: I started in this business as a costumer and became a writer when I released my first novel in 2002. This novel was introduced to an agent by actress Terri J. Vaughn.

Although it didn’t become a series, Terri and I started a production company in 2005 – Nina Holiday Entertainment. We began telling stories about women that we knew needed to be heard.

Over 10 years later, we are still doing what we set out to do. “When Love Kills” is just one of our amazing projects along the journey. 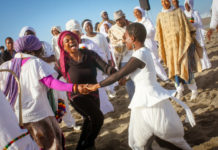