“Witnesses said a crowd of counterdemonstrators, jubilant because the white nationalists had left, was moving up Fourth Street, near the mall, when a gray sports car came down the road and accelerated, mowing down several people and hurling at least two in the air. ‘It was probably the scariest thing I’ve ever seen in my life,’” one witness said, the New York Times reported.

A 32-year-old woman was killed and 19 were injured in the attack, which the police are calling a criminal homicide. The governor declared a state of emergency.

The New York Times story described the preceding scene in the park this morning: “Waving Confederate flags, chanting Nazi-era slogans, wearing helmets and carrying shields, the white nationalists converged on the Lee statue and began chanting phrases like ‘You will not replace us’ and ‘Jews will not replace us.’

Witnesses said a crowd of counterdemonstrators, jubilant because the white nationalists had left, was moving up Fourth Street, near the mall, when a gray sports car came down the road and accelerated, mowing down several people and hurling at least two in the air.

Charlottesville activists demanding the Robert E. Lee statue’s removal are following in the footsteps of Bree Newsome, who climbed the flagpole in front of the Statehouse in Columbia, S.C., to remove the Confederate flag in 2015, and Malcolm Suber and his team with Take ‘Em Down NOLA that successfully pressed this year for removal of several Confederate statues, including one of Robert E. Lee, from New Orleans.

“Here in Charlottesville,” the New York Times reports, “the protest, billed as a ‘Unite the Right’ rally, was the culmination of a year and a half of debate in Charlottesville over the fate of the Lee statue. A movement to remove it began when an African-American high school student here started a petition. The City Council voted 3 to 2 in April to sell it, but a judge issued an injunction temporarily stopping the move.”

After President Trump condemned the violence, though not the Alt-Right, David Duke sent him two tweets:

“So, after decades of White Americans being targeted for discriminated (sic) & anti-White hatred, we come together as a people, and you attack us?”

“I would recommend you take a good look in the mirror & remember it was White Americans who put you in the presidency, not radical leftists.”

PSL Statement: Solidarity with the anti-racist, anti-fascist heroes in Charlottesville

by Party for Socialism and Liberation

No matter what disclaimer is made by Donald Trump, it has been his campaign of overt racism and white supremacy that has emboldened the KKK, Nazis and others who have re-branded themselves the “Alt-Right.” They believe their time has come. “Make America Great Again” and going “Back to the Good Old Days” are understood by the white supremacists just as Trump means them.

It is disgusting that the corporate-owned media is drawing an equivalency between “the violence of the right and the violence of the left.” That only obscures the reality that the fascist and white supremacist movement is the incarnation of violence and terrorism just as it was with their Nazi idols.

The Party for Socialism and Liberation expresses our total and complete solidarity with the brave anti-racists and anti-fascists on the ground in Charlottesville, Virginia, confronting white supremacists. At the time of this writing, one has reportedly been killed and 19 people are in the hospital with very severe injuries, broken bones, after a fascist drove a car at a high speed into the protest. Dozens more have been injured in street clashes.

We salute the thousands who are in the streets, who have put their bodies on the line to say “No pasarán” – they shall not pass. The fascist rally, numbering around 500, was broken up by thousands of counter-protesters and prevented from marching on several occasions. Then the fascists resorted to using their cars. They rammed into protesters who gathered to stop the white supremacists from marching to a majority-Black housing project.

There is no doubt that the state is complicit in this fascist attack, enabling the mobs to roam freely. “The police took no responsibility for the streets, only one park in Charlottesville. As a result, five people are in the hospital,” said Phil Wilayto, an organizer with the Virginia Defenders, who was giving first aid to those injured alongside the local Black Lives Matter and Showing Up for Racial Justice chapters. “We cannot depend on the state to defend us from fascist mobilization. We have to do it ourselves.”

No matter what disclaimer is made by Donald Trump, it has been his campaign of overt racism and white supremacy that has emboldened the KKK, Nazis and others who have re-branded themselves the “Alt-Right.”

Organized white supremacists represent nothing but terror and violence in the United States. They are not a mere political or ideological current. Wilayto recounted: “These are not the Young Republicans; these are Neo-Nazis. One of their slogans was ‘Today Charlottesville, last stop Auschwitz.’”

Their growth poses a mortal threat to Black, Latino, Native, Arab, Asian, Jewish, Muslim and immigrant communities, to women and LGBTQ people, and to the organizations of the working class. Any action to preemptively stop their advance is therefore self-defense on behalf of millions of people nationwide. The liberal hand-wringing about violence “on both sides” – equating fascists with anti-fascists – is the height of cowardice and duplicity, and we condemn it in the strongest possible terms.

It is a dangerous escalation that the fascists would feel the confidence to march with torches and weapons, and without hoods, through a city where they know the vast majority of residents oppose them. Electrified by the Trump campaign and presidency, they are now starting to form more disciplined and armed units. They must be fought every step of the way, through mass mobilization and direct action, and sent back to the shadows from which they came.

The fascist conference and rally was billed as one to “Unite the Right.” While they have considerable ideological and tactical differences, they are coming together in the streets to oppose those they see as their common enemy. Those on the Left must do the same, forging steadfast unity in the streets – as the heroes and martyrs of Charlottesville did today.

Take Em Down NOLA stands firmly with the anti-racist forces that today confronted the forces of Nazism and white supremacy in Charlottesville, Virginia.

We totally condemn the pro-white supremacist statement of U.S. President Donald J. Trump, who erroneously equates those of us who are fighting for freedom and democracy with those fighting for oppression and racism.

These are the white supremacy forces unleashed by Donald Trump’s campaign and from his racist policies. Trump refuses to utter the words racism and white supremacy. It is precisely this discussion that must be had if we are to make progress in the USA.

The white supremacists who protested the removal of the Robert E. Lee statue in Charlottesville committed acts of domestic terrorism: One person is dead and 19 are injured.

Take Em Down NOLA is issuing a call for the arrest and prosecution of all those who took part in this act of domestic terrorism. For more information, contact Malcolm Suber at 504-9317614. 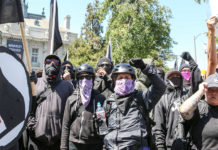