On Aug. 19, you can be part of the New Abolitionist Movement even if you can’t travel to Washington, D.C., for the Millions for Prisoners Human Rights March. We’re organizing a sister march right here in the Bay, in San Jose.

Be with us as we gather at 11 a.m. in Raymond Bernal Jr. Memorial Park, Seventh and Mission, then march at 12:30 p.m. to James P. McEntee Plaza at 70 West Hedding for our rally. We guarantee you’ll be inspired and meet new friends and allies. 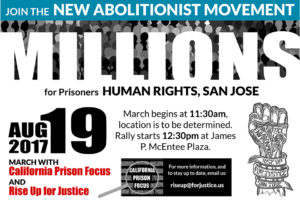 We feel this is a defining moment for those on the front lines working tirelessly and courageously to bring light to the humanitarian crisis that is mass incarceration. Incarcerated people on the inside, in collaboration with people on the outside, have created a massive platform to share and bring awareness to the many issues of human rights violations, injustice and abuse taking place in our prisons culminating in a march and rally in Washington, DC.

Here in San Jose, California Prison Focus and Rise Up for Justice have come together to organize a sister march to follow the lead of this audacious move by those subject to retaliation and to show our support for this very important cause. We march in solidarity to bring voice to and awareness of all the injustice and especially these nine points:

We encourage all feeling, thinking, concerned people who care about the soul and humanity of their community and its members, themselves and their families to march and rally with us to gain awareness, build solidarity and become supporters of the New Abolitionist Movement. This is about all of us. Our humanity is on the line, people. Join us!

Nube Brown, with California Prison Focus (CPF) in San Jose, can be reached at cloudhiker9@gmail.com.