May our Divine Mother-Father Creator of and in All – and Beloved Ancestors from yesteryear and yesterday – find you and (y)our extended Family in healing Spirit. 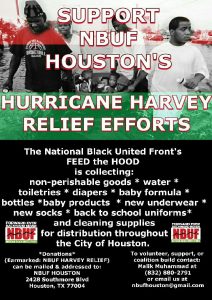 In the mid-1980s, i made my very first trip to Jamaica, the original Indigenous Carib island nation and birthplace of Ancestors like MARCUS GARVEY, NESTA ROBERT “BOB” MARLEY and other revolutionaries. While there, i met an elder by the name of Gladstone. Yes, that name was an outgrowth of English colonialism. Up around the north coast town of Oracabessa, he was more popularly known as “Ten.” After a rough month of devastating winds and epoch rains, Ten shared his wisdom on the typical hurricane season, at that time. It went a lil sumthin-sumthin, like this:

With the worsening climate chaos and environmental disruptions and destruction, Ten’s advice may no longer be as valid. Worldwide, WE are witnessing not only increasing droughts but a lengthening of the hurricane season and their increasing intensity and impact. Our sacred thoughts, prayers and support go out to all those affected by these corporate greed-induced and deadly disasters – and the thousands who have lost their lives and livelihoods to previously preventable circumstances – most recently in the West African nation of Sierra Leone and the Gulf Coast region of Texas and Louisiana.

In solidarity, our readers are encouraged to consider the following action steps:

This month, WE also celebrate and wish a magnificent Sacred B’EARTHday to the publisher of our San Francisco Bay View newspaper, Elder Willie Ratcliff. He turns an amazing 84 years young on Sept. 18 [according to his birth certificate, but his mother said the correct date is Sept. 21]. Please join us in honoring his many contributions and decades of promoting progressive politics, inclusive actions and affirmative prosperity. WE encourage you to send him a note of Gratitude … and, better yet, a much-deserved monetary donation, to San Francisco Bay View, 4917 Third St., San Francisco, CA 94103. Asé. Amen.

This month, WE also celebrate and wish a magnificent Sacred B’EARTHday to the publisher of our San Francisco Bay View newspaper, Elder Willie Ratcliff.

Our sacred thoughts and prayers go out to the victims, survivors and families of continuous terrorist attacks, murder and beatings, including HEATHER HEYER and DeAndre Harris, in Charlottesville, Virginia. WE are filled with Gratitude for the outpouring of righteous indignation and positive activity by all those who are standing up to challenge the terrorist groups’ violence and racism.

Please be aware that as deadly and dangerous as these organizations are, it is those terrorist abusers of power in high corporate, government, court, prison and military and police positions that are the real danger to our lives, human rights and futures. While WE are busy fighting these battles on the streets – most often against ignorant, dispossessed and misguided individuals and relatively small formations – the elite are commanding and implementing their fascist policies in the suites.

For example, the corporate media appears obsessed by the noise of Trump’s tweets … and not giving the same amount of attention to the re-opening of “hunting season” on those who look like “immigrants” (of color). Or, that state executions are on the rise, on prison death rows and on the streets. Voting rights and protections are being dismantled. And, this go around, without the white hoods, nooses and outright racist proclamations of old.

While WE are busy fighting these battles on the streets – most often against ignorant, dispossessed and misguided individuals and relatively small formations – the elite are commanding and implementing their fascist policies in the suites.

Indeed, the Grand Wizard has been replaced publicly by the well-dressed “gentle-man” or “gentle-woman” from this or that state. As a fellow activist often says: “The upfront terrorist lyncher ‘Jim Crow’ in the white sheet and noose … has been replaced by his more sophisticated off-spring, ‘James Crow, Jr. Esq.’” Sho ya right. Asé.

CONGRATS to Dr. Denise and Larry Lionel Young Jr. on the birth of their son, Larry Lionel Young III. A decade ago, Larry was a part of our “African Youth Leadership Exchange” that i was fortunate to coordinate for several years with the Nobel Peace Prize-awardee American Friends Service Committee. That project involved dozens of young people in our successful “Life Over Debt” Reparations campaigns for African nations, sending them to support movements on our Mother continent and bringing youth activists from Africa here. Collectively, our movements on the continent and around the Diaspora, were able to achieve hundreds of billions in debt cancellation and relief for Africa. Asé. Amen.

WE remember and celebrate the lives and contributions of our Ancestors. This includes (very, very belatedly), our beloved AILEEN HERNANDEZ. Mother Aileen boldly worked for many decades on international, human rights, equality for women and labor issues. She was appointed by then President Johnson in the 1960s as the only woman on the first “U.S. Equal Employment Opportunity Commission.” However, after a short period of challenging other members, she soon resigned that post due to its “foot-dragging” in resolving many critical cases.

She also was a founding member of, and elected as the second president, of the National Organization for Women (NOW). But, again, with her no-nonsense Spirit, she later left that organization for its focus on upper-class over working women’s issues; and for electing an all-white slate of officers in the late 1970s.

WE remember and celebrate the lives and contributions of our Ancestors. This includes (very, very belatedly), our beloved AILEEN HERNANDEZ.

Aileen made herself available to younger organizers, including myself. She gave us wise counsel on a number of campaigns, like saving Oakland’s Highland Hospital and other Alameda County facilities, which helped save thousands of critical health-care jobs. So, WE will always be grateful for the brilliant, bold and beautiful Life of AILEEN HERNANDEZ! Asé. Amen.

Finally, it was the Third of September. That day i’ll always remember. Yes, i will. Cause, that was the day that my beloved Baba graduated … to Ancestor-hood. So, WE remember the Family Stone, not the “rolling stone” – CLEVELAND LEE ARMSTRONG SR. – who made his sacred Spiritual Transformation 15 years ago this month! Long Live His Loving Spirit, Incredible Example and Great Service! Asé. Amen.

Jahahara is a Baba (Father), a “FREE-tired” community-labor-environmental and justice organizer, writer, musician and author of several books, including “Many Paths to Kujichagulia (Self-Determination).” Check samples of his musical catalog on Soundcloud.com (search Jahahara). Reach him at www.africansdeservereparations.com or FONAMI, P.O. Box 10963, Oakland, CA 94610 usa.