Should you or a loved one ever have the great misfortune of being tried and convicted in the state of Texas, your sentence, no matter how great or small, could very well be a death sentence. If you are resilient, strong of mind and body, then perhaps you would survive the conditions: deadly heat, toxic water, squalid living quarters and ill prepared food – and struggle through the conditioning: slave labor, consistent degradation, dehumanization in a variety of fashions – bowing down to insulting, offensive verbal abuse from staff, group strip searches, zero privacy.

However, even then you face lasting effects both mental and physical. Think high blood pressure, H. Pylori, harmful bacteria from dirty water, exposure to lead and arsenic. Then too, there’s the inevitable depression, social disorder derived from long term isolation, to name only a fraction that survivors will face. Should they escape with their lives, one could question whether their quality of life had been reduced such that years of their future have been reduced. Essentially, two years served now could mean 10 years of life expectancy lost – a heavy price for any “offender,” to be sure.

What brings my voice to protest this day is a matter at hand that could very well mean life or death. Eastham Unit is one of the oldest prisons in Texas and the fact is quite evident from the interior: rusted out bunks, the old plumbing – a source of toxic metals in our water – red brick walls collecting heat.

The biggest problem we face today is the ancient door cranking system. An officer must use a hand crank from the outside of the line building to open the cell doors. Just in the last month, prisoners had to be literally cut out of the showers! The process took three hours. Just yesterday all the prisoners in one whole building were put out in the “recreation cages” for hours due to the doors all malfunctioning.

With the heat index soaring to 106 F and higher in Texas, heart attacks, heat strokes and hyperthermia are very real concerns. Read Ms. Candice Bernd’s article in the August 2017 issue of the Prison Legal News about Larry McCollum, a 58-year-old cab driver who died of hyperthermia in the Hutchins Unit. He was serving 11 months and ended up with a death sentence.

With the ancient plumbing, lead paint, black mold and faulty doors, Eastham should be condemned. Why isn’t it? It is because this is Texas and Texas makes its own rules.

Or is it that we are prisoners? Prisoners are people who were held accountable for crimes, so why isn’t the state of Texas being held accountable for the crimes committed daily against those under the care and custody of their criminal “justice” system? I’m no lawyer, but the last I looked it’s still illegal to violate the constitutional rights of those who were convicted of past crimes. Now a word from Malik.

Comrade Malik: In my own hand

Revolutionary greetings, Comrades! Once again Comrade Kado raises an issue which deserves closer scrutiny. The central issue is the infrastructure deterioration and decay at the Eastham Unit. The malfunctioning door problem is of special concern to me because I suffer from epilepsy. I take medication in order to keep my seizures in check.

However, the deadly extreme heat exacerbates my condition. So what if I have a grand-mal seizure and the cell door fails to roll when cranked? Any first responder will tell you that the first minutes following a drastic medical emergency are the most crucial to saving a life! Heart attacks and strokes are very common in Texas prisons, especially when we are now starting to experience heat indexes of 110 F and higher. 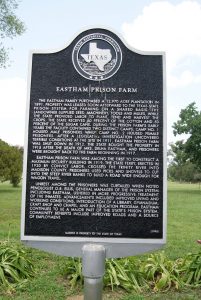 Contrary to what the Trump-etts are saying, climate change is real! Comrades, at Eastham Unit Ad Seg, we are suffering from a lack of meaningful oversight. The ombudsman office acts as a liaison between the Texas Department of Criminal Justice and the public at large. The ombudsman has become a failed program mainly because they have allowed prison officials to manipulate the process of investigating valid complaints.

What Comrade Kado and I have observed is our families and friends submitting complaints on our behalf about conditions here at the unit which threaten our health and safety, such as black mold, deadly heat, faulty door mechanisms. When the ombudsman faxes these complaints to the unit, we are not even pulled out for a statement or even informed.

Assistant Warden Gregory Vaughn has condoned and sanctioned the fabrication of misinformation, and the ombudsman reports these lies to our loved ones! No oversight, no transparency and definitely NO accountability, yet our struggle continues.

Comrades, brothers and sisters in the struggle, I am in this fight and will struggle until my final days. You are the voice of the people. Cry out against these cruel and tyrannical injustices being thrust upon the heads of the people!

Amplify my voice in protest against a system that heeds no law but its own! There are fathers here, brothers, sons and husbands – people who are desperately trying to make it home while enduring such conditions that the captives in the dreaded Guantanamo Bay would cringe at! Even there, it was cool in summer time.

Struggle and Succeed! Fight the Power! In Love and Rage,

Not a privilege – just hell!