On March 15, 2018, Wealth and Disparities in the Black Community – Justice 4 Mario Woods hosted a rare and historic event: a visit by California Attorney General Xavier Becerra to the Bayview neighborhood of San Francisco to take part in a discussion about police violence and racist policing in the San Francisco Bay Area. The conversation with Attorney General Becerra is part of our ongoing efforts to outreach to elected representatives and bring them into the underserved, historically Black neighborhood.

Our position is that politicians are disconnected from constituents, especially Black people. We seek to bring representatives into the community to meet with constituents. The attorney general forum featured civil rights attorney John Burris as moderator and was attended by numerous family members of victims killed by police in the Bay Area – Mario Woods, Pedie Perez, James Rivera Jr., James Nate Greer, Oscar Grant, Colby Friday and Keita O’Neil. Approximately 40 guests joined and presented questions to be answered by the attorney general, as 20 of our members volunteered to coordinate the event, which was held in the historic neighborhood icon, the Bayview Opera House.

We have made three demands since our founding after Mario Woods was mowed down by a firing squad of San Francisco Police Department (SFPD) officers: 1) The resignation or firing of Chief Suhr, which did occur on May 19, 2016, the day Jessica Nelson was also shot and killed by SFPD in the Bayview; 2) Charges for killer cops; 3) An independent civil rights pattern and practices investigation of SFPD. It is within the California attorney general’s power to demand that investigation.

Such investigations are launched when a police department appears to have a pattern and practice of rights violations and is unable to reform itself. Within the past two years, the SFPD has made national headlines for numerous killings of citizens, mostly Black and Brown citizens, in circumstances that clearly reflect violations of civil rights.

In 2015, the year Mario Woods was killed, San Francisco made the top 10 WORST list out of 100 cities nationally for per capita killings by police. See www.mappingpoliceviolence.org. In 2016, a United States Department of Justice (DOJ) Community Oriented Policing (COPS) review of SFPD was launched.

In September 2017, Trump appointee federal Attorney General (AG) Jeff Sessions announced that he is dropping all reviews of police departments, including this one. However, because the San Francisco Board of Supervisors unanimously voted to enforce the reforms in the COPS report (something that Wealth and Disparities in the Black Community – Justice 4 Mario Woods lobbied City Hall for) – even with the federal AG dropping the oversight, San Francisco had to identify oversight for the COPS recommendations.

California AG Xavier Becerra is now in control of oversight of the reforms since the signing of a Feb. 5, 2018, memorandum of understanding (MOU) between the California Department of Justice, the City and County of San Francisco and SFPD. See https://www.kqed.org/news/11648011/state-stepping-in-to-oversee-san-franciscos-police-reforms https://oag.ca.gov/system/files/attachments/press_releases/DOJ%20MOU1.pdf. Wealth and Disparities in the Black Community – Justice 4 Mario Woods continues to demand what we did originally around the police department: a full civil rights pattern and practices investigation – not just reforms – of SFPD.

AG Becerra fielded questions during the forum around oversight and investigation of SFPD. Other important questions included demands to revoke portions of the California Peace Officers Bill of Rights that prevent police officers’ records from being made public – records such as whether the police officer has ever received complaints regarding racist or excessively brutal policing. See: https://leginfo.legislature.ca.gov/faces/billNavClient.xhtml?bill_id=201520160SB1286.

AG Becerra fielded questions during the forum around oversight and investigation of SFPD.

Woods sat next to longtime friend, Joel Babbs, who is a Bayview native and SFPD officer. Wealth and Disparities in the Black Community – Justice 4 Mario Woods has been an advocate for Officer Babbs as he’s faced retaliation from fellow officers for whistleblowing. See https://www.nbcbayarea.com/news/local/Charges-Dropped-Against-SFPD-Cop-Facing-Vehicle-Registration-Fraud-Filing-False-Police-Report-475011243.html.

As Woods pointed out in her powerful words to AG Becerra about police with a history of racism, “How can you police me if you hate me?” She talked about how her son, Mario Woods, was a victim of that type of racist hatred within SFPD. Woods’ words concluded the event, a powerful reminder of what is at stake.

Wealth and Disparities in the Black Community – Justice 4 Mario Woods also presented some alarming statistics at the meeting. Under the DOJ COPS reform recommendations, SFPD statistics are publicly available at sanfranciscopolice.org and https://sfgov.legistar/Legislation.aspx.

As Woods pointed out in her powerful words to AG Becerra about police with a history of racism, “How can you police me if you hate me?”

We found that the executive summary reports presented to the San Francisco Board of Supervisors by SFPD consistently show only select pieces of data that are not presented consecutively. They seem to be presenting only certain pieces of data, with the intent of showing improvement. 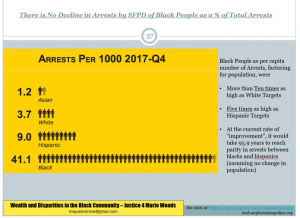 However, in reviewing their own data, we discovered that there is an ongoing issue of excessively disparate policing of Black people, and it is not improving.

The numbers say it all. As do all the various studies and reports. As do the racist text messages sent during not one but two racist SFPD “textgates.” See https://www.sfgate.com/crime/article/Under-pressure-over-officers-racist-texts-7384205.php.

The numbers say it all. As do all the various studies and reports. As do the racist text messages sent during not one but two racist SFPD “textgates.” The data reflects the ongoing racist brutality within SFPD.

The data reflects the ongoing racist brutality within SFPD. This mentality is what is responsible for the firing-squad-style execution of Mario Woods: https://www.youtube.com/watch?v=ADr7I8m0HNA. This mentality continues to this day, and continues to be the cause of the killing and brutalization of Black and Brown people – such as just within the past few months Adolfo Delgado and Keita O’Neil. See https://missionlocal.org/2018/03/19-year-old-police-shooting-victim-came-to-the-u-s-as-a-child-and-grew-up-and-worked-in-sfs-mission/ and https://www.nbcbayarea.com/news/local/Bodycam-Footage-Released-in-SF-Officer-Involved-Shooting-462706423.html.

As we reported in the Bayview over a year ago, San Francisco District Attorney (DA) George Gascón has NEVER, not once, since he began his tenure as DA in 2011, indicted a single police officer for any of the killings by SFPD. See http://sfbayview.com/2016/11/activists-to-san-francisco-da-prosecute-Gascón/. That pattern and practice continues to this day.

We are alarmed by the ongoing racism and brutality within SFPD, as evidenced by the news stories and statistics and by Gascón’s ongoing failure to act. Our outreach to Attorney General of California Xavier Becerra is a dialogue around these pattern and practices issues – and our demand for a civil rights pattern and practices investigation.

Wealth and Disparities in the Black Community – Justice 4 Mario Woods meets every Thursday, 6-8 p.m., at 5600A Third St., San Francisco. We can be reached at mwjusticenow@gmail.com.