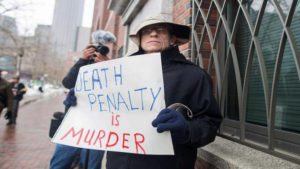 If you have a high-profile lawyer with powerful friends and you’re tortured while on death row in Alabama, everyone in the nation not only knows about it – overwhelmingly, especially in liberal, progressive, civilized circles of thought and news – they’re righteously appalled.

But poor death row inmates in Alabama (which overwhelmingly describes the population) who’ve got no high-profile lawyer, who are not backed by Columbia University Law School, whose stories are not featured in The New Yorker multiple times, and who have no well-connected, media-savvy friends and supporters? They can be tortured just as terribly, just as brutally – they can be killed barbarically – and not many people in America, much less the rest of the world, knows a thing about it. Or worse, cares.

Can a rosier conclusion be drawn from reading “The Cruel and Unusual Punishment of Doyle Lee Hamm” in The Nation, The New York Times’s “Death Penalty Madness in Alabama,” “Doyle Lee Hamm execution: Repeated jabbing of death row inmate in attempted lethal injection amounts to torture, says lawyer” by The Independent, or, not dissimilar from CNN’s synopsis, “‘Gory, botched’: Alabama’s aborted execution of inmate was bloody, says lawyer,” in The Guardian?

While colorfully cataloguing the carnage of Doyle’s failed execution, none of these columns – nor virtually any news or opinion piece written about the death penalty in Alabama before Hamm’s horror, or since – not even the commendable reporting of intrepid abolitionist writer Liliana Segura for The Intercept – goes far enough to expose and effectively condemn the depravity of Alabama’s torturous lethal injection protocol.

This is because media conglomerates, online and print magazine and newspaper publishers, editors and writers reporting and opining on the “death penalty madness in Alabama” do not seem to realize or appreciate they’re not writing (and reporting) on a blank slate of savagery – and suffering.

While colorfully cataloguing the carnage of Doyle’s failed execution, none of these columns goes far enough to expose and effectively condemn the depravity of Alabama’s torturous lethal injection protocol.

For as I asserted in “[c]all lethal injection the vile torture it is,” not only is it “increasingly more important … to use the word ‘torture,’ as a censure, to describe the barbarity of lethal injection[,]” it’s also just as critical in this country that we confront the pattern of “stern-faced state officials, particularly in the South, [who] regularly trot out for extra pay, withered, weakened, beaten down – dying even – old men (and much more rarely, women) to torture them to death. [And, that] [t]his occurs many years, sometimes even decades, after their crimes of conviction.”

Without this critical context, discussion and reference to the horrific, historic hell characterizing not only the ancient – but recent – history of the death penalty in Alabama, when Jake Bittle writes (for The Nation) that “Hamm’s case will stand as testament to the state’s determination to exercise its monopoly on violence, no matter how impractical, time-consuming, or cruel that exercise becomes[,]” he could just as easily have been discussing the cases of Torrey McNabb, Ronald Bert Smith and Christopher Brooks, all of whom were executed relatively recently in Alabama – before Hamm’s horror.

In all three cases there exists patent, persuasive evidence that appears to directly implicate state officials in their torturous deaths. (Not to take anything away from other recent, potentially torturous Alabama executions like Tommy Arthur’s, where there was no visible evidence of physical pain and suffering but, as I observed elsewhere, “maybe the excruciating, cruel and unusual pain Arthur felt – and the resultant torment on his body as the lethal drugs saturated his system – was sanitized from public view by way of a chemical straightjacket?”)

And, when columnist Roger Cohen writes (in The New York Times) that Alabama Corrections Commissioner Jeff Dunn was “unmoved” by “an abomination foretold” (a “‘bit of butchery that can only be described as torture,’ [according to] his attorney, Bernard Harcourt”), he likewise whiffs or at best shanks a plum opportunity to wallop state executioners and particularly Commissioner Dunn – the Baghdad Bob of Alabama’s death row – for repeated instances of torture, and then lying to cover it up.

In all three cases there exists patent, persuasive evidence that appears to directly implicate state officials in their torturous deaths.

When news organizations report on the stainless-steel-sticking or “jabbing” of a frail and dying man but observe only that his lawyer, a Columbia University law professor says this “amount[ed] to torture” – without consideration or discussion of any of the state’s recent atrocities in lesser-known, not-as-well-publicized cases – they dilute and diminish the magnitude of the (most current) evil that has occurred.

For what masterful American writer James Baldwin observed about the effort it takes to become a great novelist is no less true for writers, reporters and historians attempting to convey the continued, cumulative monstrosity of the death penalty in Alabama, and in all of America: They must “tell as much of the truth as one can bear, and then a little more.” They must “mount[] an unending attack on all that Americans believe themselves to hold sacred. It means fighting an astute and agile guerilla warfare with the American complacency[.]”

As I observed about “[f]inding solace in [another great American writer John] Steinbeck during the time of Trump,” writers writing about the death penalty today must do so “in the most human, most piercing, most painstaking and revealing of ways, [to best] highlight the stories of the poor, the marginalized, the disenfranchised, and the vulnerable.”

And as this concerns meaningful reporting on the administration of the death penalty in Alabama, on pace to perpetuate one torturous execution right after the next, this can only happen when this reprehensible fact is finally, fully and freely acknowledged everywhere: Alabama has been torturing poor people for a long time.

Stephen Cooper is a former D.C. public defender who worked as an assistant federal public defender in Alabama between 2012 and 2015. He has contributed to numerous magazines and newspapers in the United States and overseas. He writes full-time and lives in Woodland Hills, California. Follow him on Twitter @SteveCooperEsq.