The Black Joy Parade in Oakland, Sunday afternoon, Feb. 25, was a heartwarming and overwhelming success! A great thing that just happened in Oakland that has practically received no media play. But what a day – a history making day! I’ve never seen anything like it in all my days.

Initially, I really didn’t know what to expect and yet I had great expectations. The buzz about the event had been good for at least a month. And when I arrived at the starting point on 14th and Alice Street, about an hour before the 12:30 starting time, the excitement was palpable. Something was about to jump off! The Miracle on Alice Street! The same place where Master Journalist Chauncey Bailey joined the ancestors and ascended to the stars!

Hundreds of Black folks were lining up and making ready for a procession that would head west, down 14th Street to Broadway and turn right on Broadway to West Grand Avenue. There were drumming groups, young stilt walkers from the Prescott Circus Theater group, dance ensembles, student youth groups from UC Berkeley’s Afro House and elsewhere, Black Cowboys on horses, floats, bands, vintage luxury sports cars carrying local dignitaries and beauty pageant winners from Sacramento to the Bay, carnival costumed baton twirlers and more. All decked out in the most colorful array.

The event could have very easily been called The Black Family Day Parade, because there were so many beautiful Black families in attendance with their young children. And in such an atmosphere as these times, who would’ve thunk it that Black joy would be so enthusiastically celebrated?! Well, kudos to the organizers of the Black Joy Parade, who had the moxie to request and believe such an event would be successful and pulled it off in less than six months! And why not? If they can have a Cinco de Mayo in San Francisco and a Chinese New Year and Street Fair in Chinatown, why not a Black Joy Parade in Oakland?

After the mile long parade, everybody turned right, one block up to Franklin and a well crafted 10 block street fair, where celebratory Black people were packed together like sardines and forced to move to and fro like snails! But we didn’t care, man, we were with family and extended family! We didn’t mind because it was us!

Like a homecoming … to ourselves! Black people back home in Oakland, where recently over 15 percent of the Black population has been – you know, the G word! Scattered to the nether regions of the East Bay and beyond, to Pittsburgh, Antioch, Tracy, Hayward, Richmond, San Leandro, Vallejo, Sacramento and other Saint Elsewhere cities.

Having attended Xavier University, a small Black college in New Orleans, Louisiana, I asked a few of my ex New Orleans friends attending the event if this event reminded them of being home, of Mardi Gras? And they agreed that it did indeed. Except I enjoyed this event better than any Mardi Gras I ever attended. No disrespect, but most of them hosting drunks from all over the world and mean people on some of the floats who hurled trinkets at you like they wanted to do damage and that people would actually fight over! The Black Joy Parade had no such hostilities and was very wholesome, enriching and exhilarating.

The predominant feeling that I came away with from this event was that our youth know more about who they are and what’s going on in the world than a lot of our grown ups give them credit for! And not only are we still surviving in these times but thriving and flourishing! Oh, Happy Day! Next year come back our way! Nakupenda is a Kiswahili word which means: I love you!

Paradise is president of the International Black Writers and Artists, was honored with Paradise Day by the city of Oakland, and his “Smoken Word” may be heard at True Vibe Records Presents. Find him on Facebook at Paradise Freejahlove Supreme. 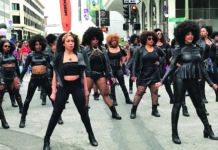 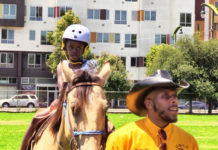 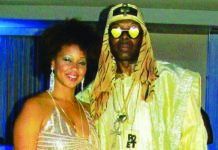