On April 26, former Black Panther Herman Bell was released from prison in New York State after 45 years. That leaves at least 10 surviving members of the Black Panther Party behind bars, including Romaine “Chip” Fitzgerald, who is currently held at the California State Prison-Los Angeles. His next parole hearing is scheduled for May 4.

Fitzgerald was convicted of murdering a security guard and attempting to murder a highway patrolman after he and fellow Panthers were stopped for a broken tail light in 1969. He pled innocent at the time but has since changed that plea to “no contest.” He has spent 49 years behind bars, more time than any other former Panther. I spoke to his friend Arthur League, a former Panther who lives in the San Francisco Bay Area.

Ann Garrison: Arthur, why hasn’t your friend Chip Fitzgerald been paroled, despite eligibility, for so many years?

Arthur League: Well, his case has been handled so much differently than those of other people with similar cases that you can only draw one conclusion: It’s because he was a member of the Black Panther Party. Chip’s been in prison for 49 years, but there’re people who’ve been convicted of multiple murders who’ve been released.

Every time you raise that question, the state responds that people like Chip are just common criminals, not political prisoners. And I would argue that they release common criminals.

People who were not members of the Black Panther Party or who were not political are released, but Chip and other former Panthers and political people are not released. It’s not rocket science to see the disparity and conclude that he’s still inside because he’s a former Panther. He’s gone to the parole board with many years of what’s called “clean time,” but they still haven’t released him.

AL: Chip took a lot of responsibility for the breakfast program. He was the one who opened the facility where we served breakfast in Los Angeles – breakfast for children. Some of the kids who are grown up now still remember him.

He did general party work; together we sold newspapers, organized political education classes, and escorted seniors to get their checks cashed so that they wouldn’t be harassed by people trying to extort money from them. That’s the general Panther work that we did.

AG: If you listen to Chip’s 2007 voice interview on Indybay or read his letters, it’s clear that he’s still full of love for people, not just Black people but all oppressed people. He said he wants to go back to the neighborhood he worked in and talk to the youth about building community instead of fighting amongst themselves. Can you imagine that?

AL: Absolutely. He took risks in prison by telling the youth there that they should be building community instead of gangs. 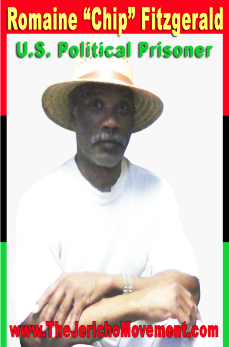 AG: Chip’s trial, including jury selection, lasted only five days, and he was sentenced to death, but the sentence was commuted when the 1972 US Supreme Court ruled that the death penalty was “cruel and unusual punishment” and therefore unconstitutional because – as employed – it was racist and “arbitrary and capricious.” Can you tell us about Chip’s trial and his legal representation at the time?

AL: Well, like a lot of people without many resources, he was represented by a public defender, and public defenders don’t have a lot of resources to defend their clients even if they try. But for a capital trial to go on for basically four days – though technically I guess there was a fifth day – that kind of lets you know what his representation was like.

He had very poor representation. Regrettably, that’s the way it was. But a four- or five-day death penalty case? I don’t think so.

AG: And does he have legal representation for this parole hearing in the first week of May?

AG: Chip mailed me a memorandum that was given to him over two weeks ago, notifying him of a list of “confidential information” that would be held against him at his parole hearing. It seems that anonymous, aka “confidential,” informants alleged that he was involved in various kinds of gang activity from March 2010 through November 2012, before the prison hunger strike in 2013.

Someone or some people seem to have reported that he was an “associate/member” of the Security Threat Group (STG)-I Black Panther Party, the STG-II Black Panther Party, the STG-1 Black Guerrilla Family and an influencer or leader of the STG-II East Coast Crips. In an allegation so racist that it should be illegal, someone accused him of being “influential and/or in a leadership position amongst the Black inmate population.” That’s actually printed on the memo from the California Department of Corrections.

Chip said that all these allegations were made after a security squad discovered that Romaine Chip Fitzgerald was in their prison, then started closely monitoring his mail and confiscated all his property looking for evidence of criminal or gang activity. He said there was none, so they fabricated these allegations that now urgently imperil his hope of finally being paroled next week. What’s your response to this record attributed to anonymous informants?

And he was never a member of any of those other groups, but it’s stuff like this that keeps people like Chip locked up for years on end. Once the lying starts, they (prison authorities) seem unable to stop, they just keep adding more and more, no matter how unbelievable it is.

The word they love most is “anonymous.” How do you contest anonymous informants?

AG: Is there anything else you’d like to say?

AL: If Chip isn’t paroled, he should be able to win his freedom by filing a writ of habeas corpus in Los Angeles Superior Court saying that the parole board’s ruling is “arbitrary and capricious.” That means it’s based on the whim of the parole board, not on the law or his prison record.

AG: Does he have the legal help he needs to do that?

AL: Not yet, and after 49 years in prison, Chip doesn’t have resources. If anyone has legal help to offer or suggest, or financial resources to help pay for legal help, they can contact the editor of the San Francisco Bay View newspaper, editor@sfbayview.com.

UPDATE: Chip Fitzgerald was not paroled. His parole hearing has been postponed for five years. More to come soon.