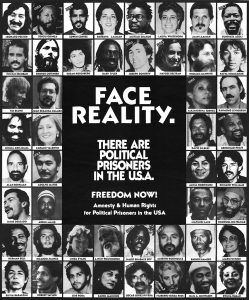 For the past year, we have been working to organize and grow the Prison Lives Matter Campaign in an attempt to rebuild and strengthen the prison movement in this kkkountry. We must continue this momentum following last years’ PLM demonstration in Indianapolis and the Millions for Prisoners Human Rights March in Washington, D.C., by mobilizing all of our leading prison abolition, revolutionary and anti-imperialist activist formations from across the kkkountry to stand in solidarity this summer.

On July 18, 2018, the New Afrikan Liberation Collective and George Jackson University are calling on individuals to attend and organize the “Prison Lives Matter: In the Spirit of Nelson Mandela” panel and demonstration in Indianapolis, Indiana. The panel will feature speakers from George Jackson University, the Millions for Prisoners Movement and others to discuss the reality of political prisoners in amerikkka. We are using the organizing slogan “In the Spirit of Nelson Mandela” in an international effort to build off the campaign call put out last year by comrade Jalil Muntaqim for a U.N. investigation into the human rights of U.S. political prisoners.

We introduced PLM as a united front for prison-class individuals, political prisoners and prisoners of war and their organizations, and the past few months I have been reaching out to several comrades behind enemy lines establishing the Prison Lives Matter-NCC (National Coordinating Committee). In developing this cohesion of cadre leaders and orgs, I believe it is fundamental to the overall struggle that those of us who have or will take on this task of the NCC also take part in and help form a “Coalition on Human Rights for Political Prisoners” as proposed by Jalil to formulate a strategy to push the following:

On July 18, 2018, the New Afrikan Liberation Collective and George Jackson University are calling on individuals to attend and organize the “Prison Lives Matter: In the Spirit of Nelson Mandela” demonstration in Indianapolis, Indiana.

I am calling on Chairperson Jihad Abdulmumit of The Jericho Movement as a keynote speaker to represent Comrade Jalil and introduce the masses to the organizational determination of “In the Spirit of Nelson Mandela.” I am also calling on Alicia Garza of Black Lives Matter, Millions for Prisoners Human Rights Organization, Malik Washington of End Legal Prison Slavery in Texas Movement and Comrade Heshima of Amend the 13th: Abolish Legal Slavery in Amerika movement to have their orgs and supporters attend and/or help organize and mobilize boots on the ground July 18, Nelson Mandela International Day, 11 a.m., outside the Indiana Government South Department of Corrections building at 302 Washington St., Indianapolis, IN.

The state of Indiana has never been known for its progressive political activity and environment, unlike California or New York, nor has its Department of Correction been known for its notable list of revolutionaries and political prisoners. Khalfani Khaldun, NALC co-founder Shaka Shakur and myself have been working diligently to turn these slave kkkamps into revolutionary universities. Our enforced isolation makes us easier and larger targets, and the low level and lack of energy or mobilization and support on the streets makes the state administration feel extremely comfortable and secure in their attacks on us.

Both Khalfani and Shaka are being held captive on the SHU in Indiana’s notoriously Klanish kkkamp Wabash Valley Correctional Facility. Shaka was recently brought up on bogus and trumped up charges in state kkkourt for assault on his captors. He is currently dealing with health issues and being denied medical treatment.

In 2013-14 I was housed on a segregation unit next to an Aryan with full-blown tuberculosis who passed the germ to me. I tested positive and was put on medication that damaged my liver causing them to stop my treatment seven months early.

I became a part of a class action lawsuit against the state and during that time I was diagnosed with a respiratory infection that has led to an immune-deficiency disorder. Due to the active lawsuit, the prison is blatantly refusing to treat me or give me antibiotics or outside medical attention.

Two months ago I sent legal mail to my lawyers containing a motion to file an injunction with the kkkourts to have me transferred for medical care citing a conflict of interest. Also enclosed were copies of my medical records over the past two and a half years showing that they neglected to treat me. It came up missing and my lawyers never received it. We see them refuse to treat our political prisoners time and time again, as is the case with Mumia Abu-Jamal.

In the December 2017 issue of SF Bay View, I announced that we had just launched our multimedia platform, “Angels for Mental Health,” on 3rd Eye Live TV, a decolonization program that serves as agitation and propaganda for PLM and the New Afrikan Independence Movement. On Dec. 31st 2017 I was assaulted by four of my captors while handcuffed behind my back during what the conduct report says was “a random shakedown.”

Despite being cuffed from behind, when it was all said and done I was accused of striking a pig in the face and written up for assault and battery. My family, comrades at George Jackson University, IDOC Watch, PLM organizers and other outside supporters responded by writing articles online exposing these correctional pigs by name, publishing pieces in SFBV, contacting External Affairs forcing an investigation, and organizing a call in to the prison demanding answers and charges for the assault.

At the same time I was going live on Facebook and YouTube every week, the views for “Freedom Fridays: Prison Lives Matter with Kwame Shakur” was growing each week as we exposed the existence and human rights violations of political prisoners and prisoners of war in amerikkka. Two days prior to my 21-month disciplinary segregation time being up in February, I was taken to an interrogation room at Internal Affairs and questioned about my “3rd Eye Live TV” interviews on YouTube, where they concluded there was nothing they could do since I was only using the prison phone.

Two days later, rather than release me to general population, I was placed on administrative segregation. On one hand my A/S status meant that I could remain on long term solitary confinement as long as the state sees me as a security threat; on the other hand my A/S status made me eligible for a transfer back to Michigan City which had been approved in January. So PLM organizers staged another call in pushing for my transfer.

Internal Affairs responded by bringing me 46 conduct reports for “Abuse of mail, phone or visits.” The actual “offense” was making three-way calls to do the show. The conduct reports dating back as far as December. Each one carries a sanction of 15 days phone, JPay kiosk and commissary restriction, which would stop me from reaching out to the world until 2019. I was placed back on disciplinary segregation, which voided my transfer.

With 90 percent of my incoming and outgoing mail already being stolen or confiscated, this latest move is an attempt to silence me and shutdown the movement. This is blatant retaliation and state repression, so we have to respond by mobilizing stronger than last year to show them that their counter-revolutionary tactics can’t and won’t censor an entire movement! The more they try to oppress us, the harder im’a fight; the more tactics they employ to silence us, the more noise im’a make.

This is blatant retaliation and state repression, so we have to respond by mobilizing stronger than last year to show them that their counter-revolutionary tactics can’t and won’t censor an entire movement!

They deny our SFBV subscriptions from coming in and deny us medical treatment. I’m taking the STATE’S money from my lawsuit to fund the movement, build an army and keep the Bay View newspaper alive. They can put me in this kkkamp’s most restrictive housing unit, take my phone and JPay privileges – that’s less money being exploited from my family going into the prison industrial slave complex AND my voice is still gonna be heard across the kkkountry because I have the power of the people behind me and I’m living through the movement.

The paper tiger can never defeat the Guerrilla! FREE ALL POLITICAL PRISONERS! AND LET’S REBUILD!!!

One love, one struggle!