by Tiny aka Lisa Gray Garcia

“Nobody should be put out alone into this cold night,” said Benita Turner, mother of Jessica St Louis, who died after being released from Santa Rita County Jail at 1:30 a.m. on July 28.

Hearing her mother’s voice at a “No CandleLight Vigil” organized by the Young Woman’s Freedom Center, a youth led Bay Area organization, helped to ease the terror rising in my heart whenever I had come to visit the plantation (jail) known as Santa Rita County Jail. It had been over 20 years since I was incarcerated for 90 days to “punish” me for the poverty crimes of “illegal camping” “overnight parking” and multiple other codes for being unhoused in this settler colonized occupied Turtle Island. But the fear, sorrow and nausea never left me.

“We want to make sure that we are gathered here to remember that a woman lost her life because this institution thought it was OK to release a young woman at 1:30 in the morning,” said community organizer Sister Krea Cristina Gomez to the large crowd that gathered for the vigil.

Krea’s words cut through to my soul. I, too, had been released in the middle of the night: It was 2:30 a.m. and, after I waited for what seemed like 10 hours with a searing headache in a flimsy shirt, with no water or food, while they finished my “release paperwork,” the system finally spit me out into the broad, blank corporate “park” that surrounds the jail with no money, no car, no jacket and no-one waiting for me.

“Nobody should be put out alone into this cold night,” said Benita Turner, mother of Jessica St Louis, who died after being released from Santa Rita County Jail at 1:30 a.m. on July 28.

The car me and mama were staying in at the time was towed when they arrested me and left my mama standing on the street. I began to walk towards some symbols of life in that really dark night and noticed that a man started following me.

“Why don’t you come wait in my car?” After trying to quicken my pace and walk the other direction from the dude, back toward the jail lights, an elder who was sitting in her car called out to me. I thank the ancestors every day for this beautiful grandmama who was waiting for her daughter to be released for saving my life, because I am certain something would have happened to me. She let me sit in her car until sunrise.

“There were so many nights I was waiting with my babies outside of here for Jan,” said sister Vivi-T about her now deceased partner who was also incarcerated in that plantation jail for multiple poverty crimes over his life. Vivi-T is a formerly houseless mama of three and fellow POOR Magazine poverty skola, reporter and advocate who also walked with two of her daughters in the beautiful vigil for Jessica St. Louis. “They always released him in the middle of the night, often times with only a T-shirt on into the cold night,” Vivi-T concluded.

“End late night releases!” Jessica Nowlan, executive director of Young Women’s Freedom Center, standing shoulder to shoulder with family and community, led a beautiful march down those dark streets. Our voices rang out into the cold night. Our hearts lifted up to send prayers and love to the beautiful spirit of another young person predated on by these systems built to incarcerate and predate on every poor person they get.

“Sen. Nancy Skinner is proposing a bill so they no longer release anyone into the middle of the night, so this will never happen again to anyone,” concluded Jessica’s mother, Benita Turner.

“Mojuba-o.” The powerful vigil ended at the Dublin BART station, which is literally a mile away on an unlit, confusing road from Santa Rita, with a prayer led by Leadership, Spiritual and Healing Director Ifasina Clear from the Young Woman’s Freedom Center.

“We want to make sure that we are gathered here to remember that a woman lost her life because this institution thought it was OK to release a young woman at 1:30 in the morning,” said community organizer Sister Krea Cristina Gomez to the large crowd that gathered for the vigil.

The beautiful march laid down prayers for Jessica St Louis, prayers for her and prayers for change, so another young person, a young woman of color in struggle who needed help, not more harm, is not lost to a system, that profiles, predates and makes money on our incarceration. Lifting up her life for spirit and inspiration to build loving systems like the Young Women’s Freedom Center and all of the prayerful community who marched in her honor that night.

Burned alive for sleeping outside 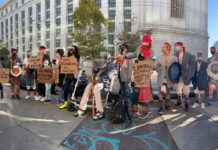