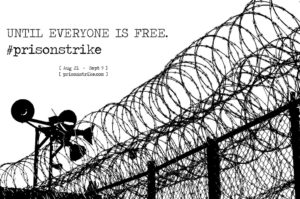 Jailhouse Lawyers Speak (JLS) is currently continuing to focus energy on supporting strikers who’re suffering retaliation, raising awareness of those who continue to strike and educating policymakers of strikers’ demands. These will be our primary focuses in this season.

We can continue to send support to strikers by sending them mail. Mailing is one of prisoners’ primary and most reliable forms of communication. With your letters of support, I encourage you to include our most recent copy of the National Prison Strike’s Newsletter.

The latest edition of Solid Black Fist’s Issue No. 6 has been released. This issue includes an updated map of all of the participating regions who’ve released confirmed actions in solidarity with the National Prison Strike. This issue also includes letters of solidarity from incarcerated prisoners in Greece and Palestinian prisoners in Israel. Of all the newsletters to make sure get out to as many prisoners as possible in your networks, this is going to be the most important one as it rounds off the strike’s conclusion.

While the symbolic end date for the National Prison Strike has passed on Sept. 9 with the 45th anniversary of the Attica Uprising, prisoners in multiple states have continued to demonstrate. We urge prisoners to establish their own end dates depending on their own individual circumstances in their state and at their specific institutions.

Some prisoners have chosen to engage in strike actions like boycotts indefinitely. So far, we know of at least two states continuing to demonstrate. At California State Prison in Lancaster, prisoners have continued to hunger strike, just finishing up a fourth week, and at Toledo Correctional Institution in Ohio both David Easy and James Ward have reinitiated their hunger strike.

While the symbolic end date for the National Prison Strike has passed on Sept. 9 with the 45th anniversary of the Attica Uprising, prisoners in multiple states have continued to demonstrate.

We know that prisoner resistance will continue for as long as there are prisons and, as endorsers of the National Prison Strike, it is our responsibility to support strikers, especially those who’ve made the brave choice to continue striking. So when people say that it ended, tell them that the strike is not over until the prisoners have said so.

While we anticipate the release of a statement from JLS, we must be aware that hundreds of prisoners in South Carolina are under the threat of flooding in the aftermath of Hurricane Florence. The lack of an appropriate response from Gov. Henry McMaster further highlights why prisoners strike.

Prisoners have been able to use this blatant form of dehumanization of prisoners by the state in order to further raise awareness about the crucial need to address all 10 of the strike’s demands. I’ve argued that officials’ failure to remove all of the prisoners in the path of the hurricane is a form of not only dehumanization but also retaliation by officials on strike organizers.

As the injustices of criminal justice system continue to reveal themselves, we must call out officials and point to the related demand. The lack of effort taken in protecting prisoners from the storm directly relates to Demand No. 1.

The online petition that has been circulating in support of prisoners demands now has well over 17,000 signatures so far and thousands of letters have been sent to members of Congress supporting prisoners’ demands and urging them to respond. Please continue to circulate this petition in your circles.

This is a national effort being sent to federal policymakers; therefore, we should be well over a hundred thousand signatures before the end of the month. Continuing to spread the petition in order to effectively educate legislators and the public is the primary priority of JLS at this stage.

In addition to circulating the petition, supporters can directly contribute to JLS prisoner initiatives here, and for tax deductible donations contributors can click here.

Continuing to spread the petition in order to effectively educate legislators and the public is the primary priority of JLS at this stage.

In addition to spreading the petition, supporters are eager to know about more next steps. While JLS is committed to continued resistance and has expressed their interest in events for next year’s actions, no plans have been solidified and no dates have been released for a National Prison Strike next year.

It’s critical that prisoners are given the space to take the lead in planning and, while we are excited for future actions, we must also be sensitive to the instability of their environment. At this stage, prisoners want to educate policymakers and the masses about the success of the 2018 National Prison Strike, which broke ground and was effective in the following ways:

Print and distribute Issue No. 6 of Solid Black Fist.

Spread links for those interested in directly contributing to JLS prisoner initiatives here and, for tax deductible donations, contributors can click here.

Remember: No plans have been solidified and no dates have been released for a National Prison Strike next year. Prisoners’ main focus is on educating legislators and seeking their response.

Knowing the success that the strike has had in the minds and hearts of citizens thus far fuels my passion for us to continue and I’m grateful to everyone standing in solidarity with prisoners leading this critical movement towards a transformational change in our criminal justice system.

Amani Sawari, spokesperson for Jailhouse Lawyers Speak, the people who first conceived the strike, is a journalist committed to “writing to enlighten, engage and empower.” She can be reached at amanisawari@gmail.com or @Sawarimi or by mail to 14419 Greenwood Ave. N., Ste A #132, Seattle WA 98133. These contacts can be used to report strike updates. Visit her website, http://sawarimi.org.