Toxic environments, as evidenced by human exposure to dirty water or polluted air, are deadly for everyone.

The police, or band of brothers, who fill quotas and shoot first are also toxic.

To connect the dots completely, we must understand how police brutality and toxic environments are inextricable forms of violence that impact communities.

As the offspring of “slave patrols,” the police are necessary to maintain the byproducts of an obsessive preoccupation with wealth – police officers are driven to serve and protect property, derived from a history rooted in the enslavement of African people and the dispossession of land from indigenous communities.

It is this need to steal and protect so-called “property” which drove the creation of the America we know today. False assumptions about protecting property have caused the dehumanization and consequent assassination of Black people at the hands of the state.

To connect the dots completely, we must understand how police brutality and toxic environments are inextricable forms of violence that impact communities.

My anti-capitalist, pro-life stance advocates for Safety Beyond Policing, where community members are equipped with verbal de-escalation techniques and other forms of proactive community-based solutions such as access to preventive health care, educational programs, free housing, healthy food options and reliable transportation. The logic here is that when we focus on building communities, a police presence is unnecessary.

To envision a Freedom City, one must oppose the cities and towns in America that allow Black people to die as a corollary of state-sanctioned violence.

The logic here is that when we focus on building communities, a police presence is unnecessary.

Trayvon Martin was murdered by the very person who had been hired to protect the property of people within his community. In June 2018, 17-year-old Antwon Rose was unarmed when he was shot by an East Pittsburgh police officer.

Last month, Chinedu Okobi died after being tased by officers near San Francisco; in 2012, Rekia Boyd was shot in the head by an off-duty police officer; 37-year-old Natasha McKenna was shocked by police with a taser, which caused her to go into cardiac arrest – McKenna died as a result.

The horrific murders of Black people provides evidence that the police aren’t concerned with the well-being of communities of color. Families have been decimated because of police officers’ careless, knee-jerk reactions.

Anti-blackness encapsulates the subconscious – and false – bias that interprets Black people as dangerous; the subsequent violence is an automatic occurrence. Here, Black life is always expendable. In this capacious medium of anti-blackness, where the police state functions separately from dignity and accountability, the police seek to care for those who have moved in to displace and gentrify.

The horrific murders of Black people provides evidence that the police aren’t concerned with the well-being of communities of color.

Violence must be understood as assuming various topographies, which differ in degree, intensity and frequency. Violence is considered to be bloody, visceral and inflicted on the body of a person in a way that is shocking and traumatic for the victim. We see violence as being active, painful and abhorrent. But violence can also be subtle, cumulative and gradually apparent.

Violence can appear in small, but sharp bursts. Only when these bursts of violence accumulate do we encounter the seriousness of it all. In Flint, Michigan, many were exposed to contaminated water, which, over time, was detrimental to their health and well-being – this was a form of violence. Further, people of color who are incarcerated have been exposed to toxic substances, leading to a deterioration in their health and the development of deadly diseases.

In a San Francisco jail, exposure to raw sewage has caused a number of health problems for individuals who are incarcerated, including breathing problems and skin rashes. People have been left to endure these horrendous conditions for over a year – this is a form of violence. Similarly, children of color have been forced to sit in classrooms which are not adequately heated, and healthy food options aren’t as accessible to them.

We see violence as being active, painful and abhorrent. But violence can also be subtle, cumulative and gradually apparent.

None of this is complicated – for children to thrive, they need adequate nourishment, shelter, warmth and clean water. They need to play in public spaces without fear of being shot by police.

The violence associated with a polluted environment is synonymous with the violence inflicted by police. We must understand how this violence intersects and demand an incompatible alternative to what we now endure.

We must create a world in which we are fully equipped to keep each other safe.

Jacqueline Bediako, M.S., BCBA, is an organizer, writer, poet, behavior analyst and educator. Her writing focuses on education, race, housing and climate justice. She is member of the National Coordinating Committee for Million Hoodies Movement for Justice, a national, membership-based, Black led organization focused on challenging systemic violence and anti-Black racism. Jacqueline believes in using education to empower individuals and groups to transcend the confines of their environment. A Ghanaian who was raised in the U.K., Jacqueline lived in Brooklyn for 10 years. She now resides in Poughkeepsie in Upstate New York. Learn more at jacquelinebediako.com. 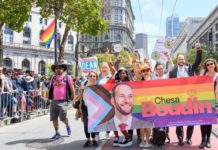