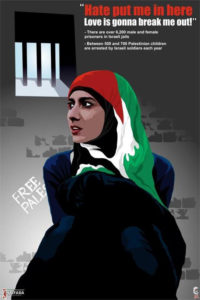 The imposition of the surveillance cameras was one of the latest repressive actions initiated by Israeli minister Gilad Erdan’s committee, charged with rolling back the accomplishments the Palestinian prisoners won through years of struggle. Erdan, who is the minister of public security responsible for the Israel Prison Service, is also the minister of strategic affairs responsible for international campaigns against Palestine solidarity activists and the growing boycott, divestment and sanctions (BDS) movement.

Palestinian women in HaSharon prison are continuing their protest against the imposition of surveillance cameras on Sept. 5 in the prison yard.

In addition to the activation of the surveillance cameras, the Israeli prison administration confiscated thousands of books and cut the amount of water that prisoners could access. Since the prisoners began their protest, the repression has only increased.

Women prisoners have been denied family visits; the hot water was cut off to the women’s section. Arab TV channels were removed from their television access. Women prisoners have been fined, excessively searched and the amounts of meat and vegetables they receive have been significantly reduced, prisoner advocates have reported. The surveillance cameras had previously been imposed several years ago, but were covered and deactivated after extensive protest.

Now, the prison administration is threatening to move all of the women prisoners to Damon prison. Palestinian women political prisoners are held in two Israeli prisons – HaSharon and Damon prisons. There are approximately 31 women and girls in HaSharon prison and 20 in Damon prison.

While the conditions in both prisons are difficult and repressive, Damon is even more notorious because of its distant location from the military courts in which the women are tried. Women prisoners have frequently cited the use of the “bosta“ – a vehicle used to transport prisoners, where they are shackled throughout the journey which often takes hours upon hours due to repeated stops, security checks and other delays.

Now, the prison administration is threatening to move all of the women prisoners to Damon prison.

Dr. Raafat Hamdouna of the Palestinian Prisoners’ Center for Studies said that this action reflects the fact that the Israeli prison administration cannot handle the women’s protest for the past 54 days. By transferring the prisoners, the prison administration seeks to circumvent the protest and create a situation of confusion and instability.

He noted that a mass transfer and the opening of new section requires substantial effort from the IPS in order to deny the women prisoners’ struggle. He called for widespread action to work to release the Palestinian women prisoners.

In support of the women prisoners in HaSharon, male prisoners in Hadarim have announced a program of struggle for their demands. They have joined the women of HaSharon in refusing to go out to the prison yard.

Two prisoners, Kifah Hattab and Khalil Abu Aram, launched an open hunger strike on Oct. 24; they are now on their eighth day without food. The ill prisoners in Hadarim have rejected medicine and clinic visits. In response, the prison administration has isolated five prisoners in solitary confinement cells, closed the kitchen and “canteen” (prison store) and threatened to transfer the prisoners collectively to isolation.

The protest was also sparked by repressive actions in Hadarim that began around Oct. 20, including the removal of all chairs and tables from the prison yard and forcing all prisoners to leave their rooms during a so-called “security check.” These actions also came as part of Erdan’s escalation against Palestinian prisoners.

In support of the women prisoners in HaSharon, male prisoners in Hadarim have announced a program of struggle for their demands. They have joined the women of HaSharon in refusing to go out to the prison yard.

Asiya Kaabneh, 41 and the mother of nine children, was also sentenced to 42 months in Israeli prison; she has been jailed since April 24, 2017, when she was seized by Israeli occupation soldiers. She was charged with attempting to stab an occupation soldier at the Qalandiya checkpoint, and she was brought back to military court 15 times before being sentenced by the Ofer military court on Oct. 30.

In addition, Wafaa Mahmoud Mahdawi, 45, the mother of Ashraf Na’alwa, who is currently being pursued by occupation soldiers, was ordered detained again for an additional eight days on Oct. 30. The entire Na’alwa family has been subject to collective punishment and repeated arrests in order to attempt to pressure Ashraf to turn himself in. Wafaa, who is held in the Jalameh interrogation center, has been detained since Oct. 17 along with her son Amjad Na’alwa and her daughter Fairuz.

Samidoun Palestinian Prisoner Solidarity Network stands in solidarity with these women prisoners on the front lines of the resistance to repression and the battle for freedom. We urge broader international solidarity with their steadfastness and dedication in confronting occupation and oppression, to achieve their demands and to win their liberation.

This story first appeared in Samidoun Palestinian Prisoner Solidarity Network, an international network of organizers and activists working to build solidarity with Palestinian prisoners in their struggle for freedom.