“Biomonitoring is the next logical, critical step for us to take in addressing threats to public health.” – Sen. Deborah Ortiz, D-Sacramento, sponsor of SB 680, The Healthy California Biomonitoring Program

On March 1, 2009, scientists of the Community First Coalition in partnership with academic researchers submitted a letter of intent to apply for $2 million in funding from the National Institute of Environmental Health Sciences to conduct research in Bayview Hunters Point. Community exposure research draws upon the powerful new science of biomonitoring to establish cause and effect relationships between toxins in the environment, their detection and disease expression among members of an exposed community.

According to the National Academy of Sciences, “Environmental health is the science and public health practice focused on the relationships between the environmental and human health.”

Community exposure research draws upon the powerful new science of biomonitoring to establish cause and effect relationships between toxins in the environment, their detection and disease expression among members of an exposed community.

While the proposal was not funded, the idea that a comprehensive community-based biomonitoring program could one day be instituted in BVHP did not “dry up like a raisin in the sun.” Instead, it smoldered like “a dream deferred,” rooted in the will of community scientists who waited for the time to come when the idea could no longer be shackled!

“Every day, in every endeavor, people interact with environments. Healthy environments are crucial to both the quality of life and to the years of healthy life that people enjoy. Environmental factors that affect human health are many and diverse, including exposures to pollutants, climate change, occupational hazards and the built environment.” – Environmental Health Matters Initiative, http://nas-sites.org/envirohealthmatters/

The body burden of the Earth 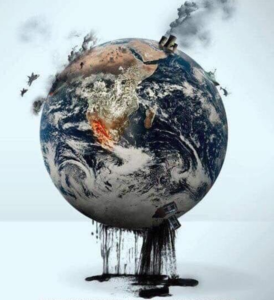 Body burden is a popular term used by environmental scientists to describe the total accumulation of toxins in our bodies or pollution in people! In 2002, a study called “The Body Burden” found dangerously high levels of toxic compounds in body fluids of human volunteers.

Biomonitoring is a research tool that measures levels of chemicals in our bodies by analyzing samples of blood, tissue, urine, hair and breast milk using mass spectrometry. These toxins permeate the environment and include residues of lead, mercury, pesticides and radionuclides. In 2004 researchers found an average of 200 industrial chemicals in umbilical cord blood collected by the Red Cross from 10 babies born in US hospitals, including pesticides, breakdown products from coal, gasoline and garbage.

In 2003, a network of public health, faith, labor and environmental groups known as the California Body Burden Campaign championed legislation to establish a biomonitoring program. The Healthy California Biomonitoring Program, SB 680, was introduced by then Sen. Deborah Ortiz, D-Sacramento. In 2008, meetings were conducted in Oakland to guide its implementation.

Bayview Hunter Point has historically been one of California’s at risk communities. In June of 1997, UCSF professor Kevin Grumbach, MD, and Tomas Aragon, MD, health officer for San Francisco and SF Department of Public Health director of Population Health, analyzed records from the 94124 zip code and found hospitalization rates for asthma, emphysema and congestive heart failure were 138 per 10,000 compared to the statewide average of 37 per 10,000. Rates for hospitalization and premature death for children were found to be markedly higher.

Grumbach and Aragon noted BVHP contained four times as many toxins as any other city neighborhood, had 700 hazardous waste facilities, 325 underground petroleum storage tanks and both a state and federal Superfund site at the Hunters Point Shipyard.

In 2004, the Environmental Health Section of the Department of Public Health documented a surge in hospitalization rates for adult and pediatric asthma, emphysema and congestive heart failure in BVHP ranging from 500 to 2,317 cases per 100,000. Additionally, the California Office of Statewide Health Planning and Development analyzed hospital discharge data in BVHP and found an incidence of 851 per 100,000, the highest rate in San Francisco.

According to the Bay Area Air Quality Management District document, “Environmental Impact on the Community: Air Pollution in Bayview Hunters Point,” the 94124 zip code ranks in the 80th percentile for particulates, carbon monoxide, nitrogen oxides and volatile organic compounds. It ranks in the 90th percentile for sulfur dioxide.

The BAAQMD’s air quality report card, “State of the Air 2007,” describes particle pollution from grading and construction projects to be a mixture of tiny solid and liquid particles called particulates. The U.S. EPA Office of Air and Radiation identifies particulate matter as a mixture of microscopic solids and liquid droplets suspended in air made of acids, organic chemicals, metals, soil, dust particles, allergens and volatilized radionuclides.

Michelle Pierce is executive director of Bayview Hunters Point Community Advocates. She holds a degree in public health, is expert in community organizing and understands the powerful role the new science of biomonitoring can play in establishing cause and effect relationships between toxins in the environment and their detection and disease expression in members of an exposed community.

Pierce pursued implementation of a biomonitoring program in Bayview Hunters Point only to be told there was no funding – or governmental will – for such a study. I consulted with her in July 2018 while petitioning Biomonitoring California to institute a program for residents living within a one mile radius of the federal Superfund site at Hunters Point Shipyard. In October of 2018, I received a response:

“Thank you very much for your message of July 10, 2018, sharing your concerns about chemical exposures to San Francisco residents living within a one-mile radius of the federal Superfund site at the Hunters Point Shipyard. As you pointed out, biomonitoring is a valuable tool that can directly measure exposers to metals and other chemicals, and biomonitoring results can be one part of evaluating potential health impacts of these chemical exposures.

“Unfortunately, the capacity of Biomonitoring California to respond to requests for biomonitoring such as yours is extremely limited. Our resources support only a small number of studies at any one time, and those studies are planned years in advance with input from our Scientific Guidance Panel. Our major programmatic focus is on statewide surveillance, gathering representative samples to measure chemical exposures in the California population.

Public health … by and for the people! 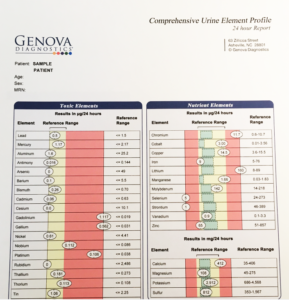 The Hunters Point Community Biomonitoring Program is preparing to launch in January of 2019. While government agencies focus on testing air, soil and water in BVHP, there is an obvious need for the institution of a community based human biomonitoring program.

Many of the analytes detected by this simple $172 test are chemicals of concern known to be present at the Hunters Point Shipyard and other trafficked and industrialized regions of BVHP, linked to a pattern of environmental diseases seen in southeast San Francisco. They include lead, copper, arsenic, manganese, mercury, nickel, chromium and the radionuclides cesium, strontium, uranium and thorium.

The program is envisioned to be a community based public private partnership with academic medicine sponsorship. Funding sources are being identified. While the low cost urine test is covered by most insurance companies, funding is sought for subsidizing uninsured residents, operational costs of a community based location, administrative oversight, medical records keeping and costs of FedEx processing.

In a letter written to Talmadge King, MD, dean of the UCSF School of Medicine and vice chancellor of Medical Affairs I shared a dream I have kept close to my heart since serving as an attending physician in 1997 for the nation’s largest toxic registry at the VA Hospitals – that a community based, low cost, safe and confidential biomonitoring program can be offered empowering residents of high risk neighborhoods to control their environment … and their bodies.

I have a dream, Dr. King … and I would like to share that dream with you. The implementation of a human biomonitoring program in a low income, industrialized community of color could radically advance environmental public health across this nation and optimize prevention, early diagnosis and treatment of environmental diseases. Please give careful thought to sponsorship of this project and share with those you believe might contribute to its realization.

At the time of publication, a grant application has been submitted to the Rose Foundation for Communities and the Environment seeking fiscal sponsorship for the startup and implementation of the Hunters Point Community Biomonitoring Program.