Prisoners in 3C Unit at the state prison in Corcoran, California, who went on hunger strike in January are speaking out after the warden backed out of negotiations to end a months-long lockdown and violence orchestrated by prison officials.

At its peak, 270 people participated in the Corcoran hunger strike, in which prisoners refused food trays for three weeks in January. They suspended their action when Warden Ken Clark agreed to negotiate and pledged to meet two of their six demands by restoring access to packages and the canteen.

But prisoners say negotiations have not progressed in the weeks since that first meeting and Warden Clark has failed to keep his promises. Family members and supporters gathered outside the prison on Feb. 9 and 10 to protest during what would have been visitation hours.

On Feb. 11, the prisoners refused their morning meal and held a day-long noise demonstration by banging on the doors and windows of their cells. However, a decision has not been made as to whether they will resume the strike.

“The initial demands remain and strikers insist that they be dealt with in good faith,” read a statement by the Incarcerated Workers Organizing Committee, which supports the prisoners.

Shadowproof interviewed two prisoners incarcerated in 3C Unit about living under lockdown, the gladiator fights, and the progress of their struggle. They are identified using pseudonyms out of fear of reprisals from prison officials for speaking out.

“Lockdown in Corcoran is basically a type of torture in the form of sensory deprivation,” Junior told Shadowproof.

“You are in your cell for 24 hours a day. No store, no packages, no visits, yard maybe once a week. Without canteen or packages to supplement your daily food intake, you are left in a constant state of hunger.”

A spokesperson from the California Department of Correction and Rehabilitation (CDCR) responded to a previous report by Shadowproof on the hunger strike by drawing a distinction between lockdowns and what they call a “modified program.” But CDCR is making a distinction without a difference.

“By taking away visits, [you’re] depriving us [of a] social component that is key to our rehabilitation, that human contact. And it also further isolates us from society,” Junior said.

“Taking all this as well as our education and rehabilitation programs leads a person into a state of hopelessness,” he continued, adding that prolonged isolation can “lead to mental damage with lasting effects on a person, and in some instances, it can lead to a tragic outcome.”

Junior described the hunger strike as “the act of men desperate to be treated fairly.”

“You can imagine how bad living conditions on lockdown had become in order for a group of men to decide I would rather starve myself rather than continue on living like this.”

He said corrections officers seemed not to care that prisoners were on hunger strike. “That was a little disheartening in the beginning, but we were definitely encouraged when people on the outside stepped in to support us.”

One of the hunger strikers’ major concerns involves fights organized by prison staff pitting rival prison groups on the recreation yard against each other. This yard time is precious for prisoners, especially those living on lockdown, because it’s an opportunity to exercise, socialize and access the outdoors. But these arrangements, known as “gladiator fights” or “dogfights,” have turned this time into a nightmare for prisoners on 3C Unit.

“The yard is a very stressful place,” Junior said. “We live on a day-to-day basis not knowing if you will be the next one to be thrown out into the next gladiator match for the guards’ amusement.”

“This Warden Ken Clark it seems is a very stubborn man. It seems like there is still a long way to go. My hopes are that this lockdown will end and Warden Ken Clark will figure out how to run this prison safely just as the wardens in Salinas Valley and Pleasant Valley have before someone else gets seriously hurt,” Junior shared.

He urged Californians to contact their elected officials and let them know they won’t tolerate the lockdown, the violence and the “overall disregard of the men affected because of this by Warden Ken Clark.”

“Lockdown here at Corcoran is basically, you don’t come out of your cell. If you’re lucky, maybe two to three hours [out of your cell] a week,” said a prisoner who will be referred to as “Eddie.”

“All your privileges are taken,” he said, “so basically you’re in a cage like an animal.”

“We’ve been like this for over four months. As for how it is in the unit, after all this time, a lot of anger, depression and stress.”

Eddie said the hunger strike has not been easy. “They carry a lot of retaliation from staff. Along with this, you are sacrificing your body, which can have a long term effect.”

“The process is not easy because your body breaks down physically and mentally. It feels like you’re in a zombie state, and of course, just add your anger and depression to that.”

He added prisoners are “willing to sacrifice our bodies for what is right. We are human beings and all we ask for is to be treated fairly and give us what little we have coming.”

Eddie said they are lucky to get two or three hours of yard time each week. “When we do, you can’t enjoy it because you’re constantly looking over your shoulder.”

“Also, at least once a week, they run incrementals, which is basically gladiator fights. They only let out four inmates, two from each group that don’t get along. The COs are the ones that choose who goes out and [who they] want to see fight, stabbed or seriously injured.”

“All COs in the administration know exactly what is going to happen because both groups have made it clear to them we can’t program with each other,” Eddie claimed. “As soon as four inmates step outside, they attack each other. Nurses and COs are already on the yard, ready because they know what’s going to happen.”

But Eddie said Warden Ken Clark doesn’t care. “This type of stuff creates an unsafe environment for staff and inmates. This is an easy fix but this warden does not care.”

“Three other prisons fixed the same issue we have here. But this warden here says those wardens over there are pussies.”

“[The gladiator fights take] a big toll on people because we don’t know if once we step out that we’ll make it back safe,” Eddie explained. “So you lose sleep and not only that, but it also affects your family as well because they’re constantly worrying about you and wanna know what’s going on with you since you ain’t getting no phone calls.”

According to Eddie, the warden reneged on the negotiations by saying, “If we can’t program with the other group, we can’t have shit coming, and we’ll continue to be on lockdown.”

“This warden is careless. He does not care about the safety of his staff nor his inmates nor the environment he’s creating, which is a very dangerous and hostile one. With him as a warden, someone is going to get killed or seriously injured and maybe then he will realize what he’s doing is wrong. By then, it’s gonna be too late.”

He urged people on the outside to help by “shedding light to what this warden is doing and the hostile environment he’s creating. Also, shed light on the gladiator fights.”

“Everyone needs to know what’s really going on here in Corcoran,” Eddie declared.

Brian Sonenstein writes for Shadowproof, where this story first appeared, at https://shadowproof.com/2019/02/13/as-hunger-strike-resumes-corcoran-prisoners-describe-life-under-lockdown/. He can be reached at brian@shadowproof.com. 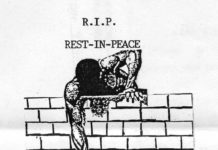 Prisoner in Corcoran SHU dies while on hunger strike