Culture Currents Diane Barnes’ ‘My Stroke of Luck’ back at the Marsh through June...
Facebook
Twitter
Email

A review by Wanda Sabir

Single mother doing all the right things for her boys, Dr. Diane Barnes has a stroke. In denial for almost 20 hours, she delays treatment until the piercing headache can’t be ignored. She lists the recovery details from Alphabet Soup or aphasia to the exhaustion brain injury causes to the body. Sleep is the restorative cure – 12-15 hours of sleep. However, how can a single mother make such a schedule work?

Diane doesn’t seem to have much support, neither family nor friends, which makes her illness impact her adolescent sons in ways they have no reference point. They just retreat to their rooms for meals – while the elder of the two boys, Logan, tells his mother to point to what she wants and he will fix it for her, and to not touch the stove (which she forgets to turn off).

As Diane writes her story, she interviews her sons and, in this way, the three begin a necessary conversation. The play serves as a scaffolding each person can hang his or her details on – like leaves on a branch or the branch itself.

Diane Barnes does not know what her boys were thinking or feeling during this time and they do not know what recovery looks like. What was the effect on the son in boarding school she didn’t visit because she could not fly for two years? Air travel is risky for stroke victims. Diane does not realize how the news of her hospitalization and then her return seven days later without a tutorial pinned to her blanket or urinal on what to expect affected her sons. Mom is just back, but she is not the mom her boys know.

The writing is eloquent and the story made me squeamish at times with the pictures of what a stroke looks like in the brain and the explosive example of burst blood vessels – strokes where people die. This was balanced by the wonderful stories about Diane and her boys – family horse riding and animal intelligence.

Born in New York into a Black middle class family, Diane shares a Christmas story that lets her audience know hers was not a happy childhood or maybe it was with limited freedoms. Her mother was a mean woman. It could be Diane not only put physical distance between herself and her ancestral ground when she moved to Marin, she also distanced herself philosophically from the parenting style of a mother who took pleasure in ridiculing and belittling her daughter.

There is plenty of comic relief, and the audience can even sing along. It is great theatre. In the lobby, the playwright has information about strokes and resources. She even puts her physician hat on to tell my friend how to be proactive in stroke prevention. Up Thursday 8 p.m. and Saturday at 5 p.m. through June 1, at the Marsh in Berkeley, 2120 Allston Way, I highly recommend “My Stroke of Luck.” Yes, there is a plus side. Visit dianebarnes415.com and themarsh.org or call 415-282-3055. 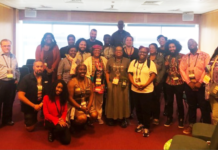 A Black perspective on the 77th World Science Fiction Convention in Dublin, Ireland 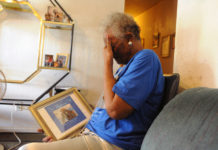