by the MOVE Organization

The MOVE Organization is calling for people to join us this Friday, Aug. 9, 9 a.m., at Geisinger Hospital, 1000 East Mountain Blvd., Wilkes-Barre, Penn. 18711. If traveling from Philadelphia, meet at 6 a.m. at JFK Blvd and 30th Street for rides.

We will be holding a demonstration exposing this outright PLANNED MURDER of DELBERT AFRICA by the Pennsylvania Department of Corrections.

The MOVE Organization would like to update people on what is going on right now as it relates to Delbert Africa. We received word from an anonymous source that Delbert is in fact urinating blood, his bladder is impacted and compromised, and his colon is starting to show wear and tear from the pressure and overworked kidneys. Fluid is still being drained but not rapidly enough. He is awake, conscious, and talking but weak.

A week ago, MOVE political prisoner Delbert Orr Africa was taken out of SCI Dallas and transported to an outside hospital where he has since been held incommunicado. Delbert has not been allowed to call his MOVE Family or blood daughter. Prison and hospital officials will not release any information to any of us on Delbert or his condition.

When Delbert was taken from SCI Dallas, he had swelling from a fluid buildup. We are now hearing from two different sources that Delbert has no more than 72 hours before he dies. Delbert’s daughter, MOVE family members, and even his lawyers are being denied access for communication, visitation, contact, and access to documents from prison and hospital officials.

Delbert is scheduled to go before the Pennsylvania Parole Board this September. MOVE members believe that the government wants to kill Delbert before he can be paroled, and there is evidence that clearly shows this. This government does not want to give ground and parole another innocent MOVE member. That’s why they are working in conjunction with prison and hospital officials to murder Delbert.

It would be a feather in the cap for officials to see Delbert DIE. What’s more of a slap in the face is that they are trying to kill him to celebrate on Aug. 8, 1978 – 41 years to the day that Delbert and other MOVE people were kidnapped by this government, being innocent and railroaded to prison.

We are highly suspicious of what’s going on here. In 2015 our MOVE 9 Brother Phil Africa was taken to an outside hospital from SCI Dallas with a minor stomach virus. He was held incommunicado for a period of five days and upon returning to SCI Dallas he was placed in hospice care only to die a day later.

In March of 1998, after recovering from a stomach virus at SCI Cambridge Springs, MOVE 9 Sister Merle Africa was told by prison officials she was dying only to die a couple of hours later.

The same pattern is repeating itself here.

It would be a feather in the cap for officials to see Delbert DIE. What’s more of a slap in the face is that they are trying to kill him to celebrate on Aug. 8, 1978 – 41 years to the day that Delbert and other MOVE people were kidnapped by this government, being innocent and railroaded to prison.

On Aug. 8, 1978, Delbert was arrested during the Philadelphia police assault on the MOVE house in Powelton Village. Police officer James Ramp died during the 1978 police assault, likely struck by one of the tens of thousands of rounds fired by his fellow officers that day. Delbert was brutally beaten and assaulted by police following this attack.

Nine MOVE members were all found guilty of firing the same bullet and were convicted of murder, assault and conspiracy by the late Judge Edwin S. Malmed. The MOVE 9 were subsequently sentenced to 30 to 100 years in prison (onamove.com). Despite serving over 40 years of a 30- to 100-year sentence, Delbert Africa remains unjustly imprisoned.

If you are traveling from Philadelphia, meet at JFK Blvd and 30th St. at 6 a.m. for rides.

BlackEconomicDevelopment.com interviewed Delbert Africa of MOVE speaking from Pennsylvania’s Dallas Prison on Saturday, Aug 8, 2009. The Bay View is republishing this now to give readers more insight into the heroic life of Delbert Africa and why we must mobilize to keep him safe and bring him home.

Delbert Africa is one of the MOVE 9. He has been in MOVE almost since the beginning. The MOVE 9 are innocent men and women who have been in prison since Aug. 8, 1978, following a massive police attack on us at our home in Powelton Village, Philadelphia. This was seven years before the government dropped a bomb on MOVE, killing 11 people, including five babies.

The Aug. 8, 1978, police attack on MOVE followed years of police brutality against MOVE and was a major military operation carried out by the Philadelphia police department under orders of then-Mayor Frank Rizzo, whose reputation for racism and brutality is well known; it followed him up through the ranks of the police department to the police commissioner’s office to the mayor’s office.

Delbert Africa says: “In 1978, during the confrontation, the cops videotaped other cops beating me. It was regarded as one of the worst instances of police brutality ever caught on tape.

“I recovered right after they stopped; I was getting better. It’s hard to describe it, that when they originally started beating me from the first cop in front of me hitting me with that helmet. The other fool put the shotgun stroke on me, put the butt stroke with the shotgun on me.

“From that time, MOMMA had just put me in a state of mind where I could feel the pressure from all the blows, the kicks and all that, but they wasn’t really hurting me. I can remember after they beat me, during the segment that everybody seen during the video tape, they drug me across the street to where Police Commissioner O’Neil, the Chief Inspector, and other high rankin’ cops was at, and they was beating me over there.” 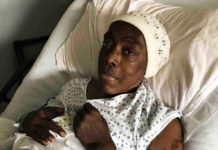