Mavin Carter-Griffin’s optimistic and touchingly hopeful recommendation for Wood Street Collective dated Feb. 28, 2019, on the group’s Facebook page describes it like this:

“An attempt at Radical Housing! 10 principles are embraced by several of the first radical self housed in a curbsided live work makers and bike trailer affordable living space. free to those who don’t suck- wanted.. more artists..no more creeps-slobz-haters-problems. must be fire safety experienced. and non flammable to live here.”

How one refers to a homeless community is very political. Terms such as community and collective indicate solidarity. Words like encampment focus on the legal aspects, such as permits, and suggest an activity that is unsanctioned by governmental authorities.

Town and village communicate something even deeper – that what we are seeing is the creation of sub-cities such as the shanty-towns seen in Haiti, Jamaica or Brazil. Zora Neale Hurston’s “Their Eyes Were Watching God” and Toni Morrison’s “Sula” describe post-reformation towns on the outskirts of town for freed Blacks. Modern tent cities and shanty-towns all over the world have large Black populations, and Oakland, San Francisco and Berkeley’s homeless communities are no different.

More and more, groups of homeless and marginally housed people find themselves moved out of warehouses and off of vacant lots to the curbside. Tensions between the homeless and the Oakland Police Department invite comparison between Oakland Mayor Libby Schaaf’s administration and former Oakland Mayor Jean Quan’s.

Like Schaaf, Quan lost favor with the voters due to heavy handed police tactics. Quan fought Occupy and BlackLivesMatters protestors, while Schaaf in the wake of Ghostship has enacted numerous ineffectual solutions for the burgeoning number of homeless Oaklanders. Far too often these involve displacing the marginally housed and homeless using law enforcement and force. Nevertheless, Schaaf managed to make it to a second term in office, the first mayor to do so in 16 years.

After the Ghostship Fire of Dec. 2, 2016, Oakland began to crack down on illegal and marginally legal warehouse housing. Initially, Mayor Libby Schaaf promised to create safer warehouses by creating funding and grant programs in order to avoid displacements. However, due to a combination of insufficient support from NIMBY business and property owners and her administration’s political policies, the actual attempts to make Oakland safer ended up consisting of reporting housing and putting people out onto the streets.

Recently, a call went out to the Oakland residents of the Wood Street Collective and their allies to gather on Monday, Nov. 25, at 3:30 p.m., to petition the Mayor’s Office. It read:

“This is a general update about recent developments on Wood Street. The community has seen increased harassment by the city and developer over the last several weeks and is protesting their treatment by the city government. The Wood Street community will be delivering their demand letter,” signed by The United Front Against Displacement.

Eviction notices had been issued to residents of the Wood Street Community. I was present to witness the activists, residents and allies delivering the demand letter. According to Melissa Mandel, an ally and witness who was present before I arrived, the Mayor’s Office responded to the demand letter by sending Darin Ranelletti, policy director for housing security, out to speak with them, to interface with the group.

“Briefly, to the best of my understanding, having just joined with this group for this protest, the situation is that an established, longterm community of unhoused people, living in RVs, cars and tents on a private lot on Wood Street have received notice from the owner to vacate within a few days. A member of this community and allies are appealing to the city to intervene on the residents’ behalf to at least postpone the removal of them and their belongings – at best to create a better solution than just putting them out to find another vulnerable location to lay their heads,” Mandel reported.

When I spoke with Wood Street Community protest leader Dayton Andrews on the phone, he explained that the Mayor’s Office wanted to remove the residents of the collective so it can renovate the spot and replace it with a government sponsored trailer park. They already displaced a bunch of the residents around the beginning of the month.

The property owner is using poorly substantiated claims of an altercation at the collective to evict the remaining tenants. If they are removed, many residents who have homemade housing or tents will have nowhere to go but the streets. The shanty-type homes will be destroyed, and not all residents have tents.

Not all of the recreational vehicles will meet the criteria for the new trailer park. Some are too old or in ill repair. Even those that pass muster will have to go to the curb during renovations. Most of the residents will be permanently displaced.

After an hour of listening to the Wood Street members story and pleas, all Ranelletti had to offer was a referral to Assistant City Administrator Marakeisha Smith, who oversees the administrator’s office staff person responsible for city-to-homeless persons relations including the Encampment Management Team that is sent out to clear encampments like the Wood Street Community, said Mandel, who was there as a witness.

“The residents of the West Oakland Wood Street Community are demanding an end to harassment at the hands of the City of Oakland. Residents are being displaced onto the street with nowhere to go. For years, homeless people have been forced to live on Wood Street. The Oakland Police Department has had an unofficial policy of directing vehicularly housed people to Wood Street. Now, as the lots are set to be developed, people are being kicked out of the last place they could park or build shelters. The City of Oakland has not provided alternative places to be and the planned ‘safe parking lot’ is months from completion.

“The residents demand that they be allowed to remain on the lot until suitable housing alternatives are found for all residents. Some have lived on Wood Street for years and the planned safe parking lot will only be a temporary program. People have been able to reside here because the lot had been abandoned for years.

“Its current owners plan to eventually develop the land at a profit, and leave the Wood Street community with nothing and nowhere to go. Many news reports center on the dirty conditions of the neighborhood; however, the City of Oakland has refused to provide adequate resources or services to meet the basic needs of all residents. This has left the community to fall into unsanitary conditions. The residents call upon the city to provide basic services to the Wood Street community.

“These services are to include

“Additionally, we the Wood Street Community, demand a meeting with the City of Oakland to submit these demands.” 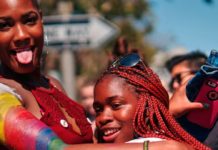 Writing While Black for October 2020: Promising new African Diaspora anthologies and a plethora of online events 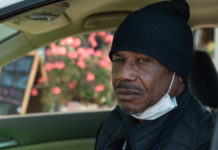 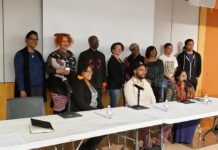