Police and state frame-up must be fully exposed!

Mumia Abu-Jamal is innocent. Courts have ignored and suppressed evidence of his innocence for decades. But now, one court has thrown out all the decisions of the Pennsylvania Supreme Court that denied Mumia’s appeals against his unjust conviction during the years of 1998 to 2012!

This ruling, by Judge Leon Tucker, was made because one judge on the Pennsylvania Supreme Court during those years, Ronald Castille, was lacking the “appearance of impartiality.” In plain English, he was clearly biased against Mumia.

Before sitting on the Pennsylvania Supreme Court, Castille had been district attorney – or assistant DA – during the time of Mumia’s frame-up and conviction and had used his office to express a special interest in pursuing the death penalty for “cop killers.” Mumia was in the cross-hairs. Soon he was wrongly convicted and sent to death row for killing a police officer.

Mumia Abu-Jamal is an award-winning and intrepid journalist, a former Black Panther, MOVE supporter, and a critic of police brutality and murder. Mumia was framed by police, prosecutors, and leading elements of both Democratic and Republican parties for the shooting of a police officer.

The US Justice Department targeted him as well. A racist judge helped convict him, and corrupt courts have kept him locked up despite much evidence that should have freed him. He continues his commentary and journalism from behind bars. As of 2019, he has been imprisoned for 37 years for a crime he did not commit.

Time is up! FREE MUMIA NOW!

In the midst of Mumia’s fight for his right to challenge the state Supreme Court’s negative rulings, a new twist was revealed: six boxes of files on Mumia’s case – with many more still hidden – were surreptitiously concealed for decades in a back room at the District Attorney’s Office in Philadelphia. The very fact that these files on Mumia’s case were hidden away for decades is damning in the extreme, and their revelations confirm what we have known for decades: Mumia was framed for a crime he did not commit!

So far, the newly revealed evidence confirms that, at the time of Mumia’s 1982 trial, chief prosecutor Joe McGill illegally removed Black jurors from the jury, violating the Batson decision. Also revealed: The prosecution bribed witnesses into testifying that they saw Mumia shoot the slain police officer when they hadn’t seen any such thing.

Taxi driver Robert Chobert, who was on probation for fire-bombing a school yard at the time, had sent a letter demanding his money for lying on the stand. Very important, but the newly revealed evidence is just the tip of the iceberg!

All evidence of Mumia’s innocence must be brought forward now!

Mumia Abu-Jamal’s trial for the murder of police officer Daniel Faulkner was rigged against him from beginning to end. All of the evidence of Mumia’s innocence – which was earlier suppressed or rejected – must now be heard:

• Mumia was framed. The judge at Mumia’s trial, Albert Sabo, was overheard to say, “I’m gonna help ‘em fry the n­­­____r.” And he proceeded to do just that. Mumia was thrown out of his own trial for defending himself! Prosecution “witnesses” were coerced or bribed at trial to lie against Mumia. In addition to Chobert, this included key witness Cynthia White, a prostitute who testified that she saw Mumia shoot Faulkner. White’s statements had to be rewritten under intense pressure from the cops, because she was around the corner and out of sight of the shooting at the time! Police bribed her with promises of being allowed to work her corner, and not sent to state prison for her many prostitution charges.

• Mumia only arrived on the scene after Officer Faulkner was shot. William Singletary, a tow-truck business owner who had no reason to lie against the police, said he had been on the scene the whole time, that Mumia was not the shooter, and that Mumia had arrived only after the shooting of Faulkner. Singletary’s statements were torn up, his business was wrecked, and he was threatened by police to be out of town for the trial (which, unfortunately, he was).

• There is no evidence that Mumia fired a gun. Mumia was shot on the scene by an arriving police officer and arrested. But the cops did not test his hands for gun-powder residue – a standard procedure in shootings! They also did not test Faulkner’s hands. The prosecution nevertheless claimed Mumia was the shooter, and that he was shot by Faulkner as the officer fell to the ground. Ballistics evidence was corrupted to falsely show that Mumia’s gun was the murder weapon, when his gun was reportedly still in his taxi cab, which was in police custody days after the shooting!

• The real shooter fled the scene and was never charged. Veronica Jones was a witness who said that after hearing the shots from a block away, she had seen two people fleeing the scene of the shooting. This could not have included Mumia, who had been shot and almost killed at the scene. Jones was threatened by the police with arrest and loss of custody of her children. She then lied on the stand at trial to say she had seen no one running away.

• Abu-Jamal never made a confession. Mumia has always maintained his innocence. But police twice concocted confessions that Mumia never made. Inspector Alfonso Giordano, the senior officer at the crime scene, made up a confession for Mumia. But Giordano was not allowed to testify at trial, because he was top on the FBI’s list of corrupt cops in the Philadelphia police force. At the DA’s request, another cop handily provided a second “confession,” allegedly heard by a security guard in the hospital. But at neither time was Mumia – almost fatally shot – able to speak. And an earlier police report by cops in the hospital said that, referring to Mumia: “The negro male made no comment”!

• The crime scene was tampered with by police. Police officers at the scene rearranged some evidence and handled what was alleged to be Mumia’s gun with their bare hands. A journalist’s photos revealed this misconduct. The cops then left the scene unattended for hours. All of this indicates a frame-up in progress.

• The real shooter confessed, and revealed the reason for the crime. Arnold Beverly came forward in the 1990s. He said in a sworn statement, under penalty of perjury, that he, not Mumia, had been the actual shooter. He said that he, along with “another guy,” had been hired to do the hit, because Faulkner was “a problem for the mob and corrupt policemen because he interfered with the graft and payoffs made to allow illegal activity including prostitution, gambling, drugs without prosecution in the center city area” (affidavit of Arnold Beverly).

• Do cops kill other cops? There are other cases in Philadelphia that look that way. Frank Serpico, an NYC cop who investigated and reported on police corruption, was abandoned by fellow cops after being shot in a drug bust. Mumia was clearly made a scapegoat for the crimes of corrupt Philadelphia cops who were protecting their ill-gotten gains.

• Politicians and the US Department of Justice helped the frame-up. Ed Rendell, former DA, Pennsylvania governor, and head of the Democratic National Committee – and now a senior advisor to crime-bill author Joe Biden – is complicit in the frame-up of Mumia. The US Justice Department targeted Mumia for his anti-racist activities when he was a teenager and later secretly warned then-prosecutor Rendell not to use Giordano as a witness against Mumia because he was an FBI target for corruption.

All this should lead to an immediate freeing of Mumia! But we are still a way away from that, and we have no confidence in the capitalist courts to finish the job. We must act! This victory in local court allowing new appeals must now lead to a full-court press on all the rejected and suppressed evidence of Mumia’s innocence!

Mumia’s persecution by local, state and federal authorities of both political parties has been on-going and has generated a worldwide movement in his defense. This movement has seen that Mumia, as a radio journalist who exposed the brutal attacks on the Black community by the police in Philadelphia, has spoken out as a defender of working people of all colors and all nationalities in his ongoing commentaries (heard on KPOO and KPFA radio in the Bay Area, also available on Prison Radio), despite being on death row, and now while serving life without the possibility of parole (LWOP).

In 1999, Oakland Teachers for Mumia held unauthorized teach-ins in Oakland schools on Mumia and the death penalty, despite the rabid hysteria in the bourgeois media. Teachers in Rio de Janeiro held similar actions. Letters of support came in from maritime workers and trade unions around the world. Later in 1999, longshore workers shut down all the ports on the West Coast to free Mumia and led a mass march of 25,000 Mumia supporters in San Francisco.

A year later, a federal court lifted Mumia’s death sentence, based on improper instructions to the jury by trial judge Albert Sabo. The federal court ordered the local court to hold a new sentencing hearing. Fearing their frame-up of Mumia could be revealed in any new hearing, even if only on sentencing, state officials passed. Much to the chagrin of the Fraternal Order of Police (FOP) – which still seeks Mumia’s death – this left Mumia with LWOP, death by life in prison.

Mumia supporters waged a struggle to get him the cure for the deadly Hepatitis-C virus, which he had likely contracted through a blood transfusion in hospital after he was shot by a cop at the 1981 crime scene. The Labor Action Committee conducted demonstrations against Gilead Sciences, the Foster City, California, corporation that owns the cure, and charged $1,000 per pill!

The Metalworkers Union of South Africa wrote a letter excoriating Gov. Wolf for allowing untreated sick freedom fighters to die in prison as the apartheid government had done. Finally, Mumia did get the cure. Now, more than ever, struggle is needed to free Mumia!

Now is the time: Mobilize again for Mumia’s freedom!

Chris Kinder works with the Labor Action Committee to Free Mumia Abu-Jamal, at www.laboractionmumia.org. He can be reached directly at cskinder44@gmail.com. 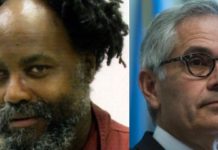 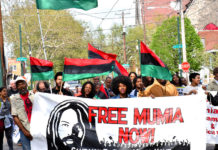 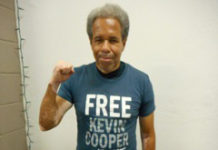 Champion of resistance: Albert Woodfox of the Angola 3, survivor of 43 years in solitary confinement, speaks in San Francisco