An elderly man sentenced to life, a mandatory 25-year term and given a $500,000 fine? What’s going on in Alabama? Drug addicts beware: He was charged with trafficking wastewater! The state of Alabama used a pill bottle full of water and heroin residue to convict this innocent man of trafficking. Why?

In an already about 200 percent overcrowded prison system, there is an elderly man who has spent over 13 years of his life illegally incarcerated due to Alabama prosecutors deciding to charge and prosecute this innocent man with a crime when the state’s evidence clearly show that he should never have been charged with anything. This man had never even had a drug charge or been to prison either and, to make matters worse, the state’s evidence that was used against him did not belong to him.

Back in 2003, this man had just borrowed a coworker’s vehicle to go to a Home Depot. While at the store, he and one of the store’s security personnel got into an altercation about the fact that he was picked out as a shoplifter by the employee. He told the man that he did not appreciate being picked out like that, so he simply left the store without anything.

Drug addicts beware: He was charged with trafficking wastewater!

Then about a mile from the store, he stopped at a McDonald’s, and once he had gotten out, a police car pulled in behind where he was parked and the officer stopped him and told him that he had just gotten a call to be on the lookout for a possible shoplifter. The man even had the nerve to bring the exact item that he had called in about and showed the officers the nailgun that he claimed the man had just stolen from the store.

But instead of the officer asking him the obvious question that good officers would have asked him – and that is if he had just stolen it, then how is it that you have it instead of this man – the officers never asked the man from the store. On top of that, they did not conduct any type of an investigation at all concerning whether or not there had been a theft.

The police did not even charge the man from the store with calling in a false allegation; and they chose not to contact the owner of either the vehicle or the pill bottle, even though the pill bottle clearly had the owner’s name on the label. They simply arrested him for some outstanding warrants for probation violations and for possession of drug paraphernalia and for obstruction of justice, because he lied to them about who he was.

They also arrested him for the theft at the Home Depot,which turned out to be a false arrest. That’s when they must have come up with the idea to send all of the drug paraphernalia to their lab and ask the lab to help them put a bogus trafficking charge on the man by using some of the drug paraphernalia, the man’s pill bottle that he kept in his vehicle to use to rinse out his needle once he had shot his drugs, heroin to be specific.

And even though the man had already been acquitted of everything – use and possession of drugs – the police were still able to use that same evidence, the pill bottle of wastewater, to indict him and have him convicted.

Now there are several questions that need to be addressed: l) Why wasn’t the man who was the reason for all of this chain of events ever charged and prosecuted for calling in a false complaint on this man? 2) Why did the state go to such extreme measures to have him convicted and sent to prison?

And why did the state spend taxpayers’ money on having him tried twice? After he was convicted, they gave him more time than many of the major drug lords who were found to have been responsible for tons of illegal drugs being on the streets.

He has been portrayed as a threat to society who needed to be taken off the streets. The ones who were a part of this miscarriage of justice should be held accountable for their actions and should be taught that even if they are the law they still are not above the law.

I guess there’s no such terms as cruel and unusual punishment in Alabama. The state misapplied the Legislature’s intent for a trafficking offense. In no way was it intended to charge, indict and convict a person with trafficking by using a pill bottle full of water and a trace amount of morphine. 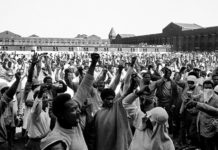 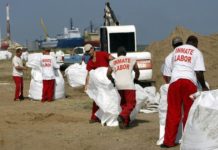