A couple of months ago, David Sumera (37063-034), who is from Louisiana but serving time in the federal system, had a gran mal seizure which left him paralyzed from the waist down. David is Black, only 34 years old, with a mere year left to serve.

He shouldn’t even be here! They don’t have the facilities in place nor the staff to offer him adequate medical care. Recently, staff have not been giving him the opportunity to shower and clean himself, so he is left sitting and lying in his urine and excrement.

On July 4, David requested to be placed in the shower. His cellmate, Jason Lee, who is also from Louisiana, helped him get in the shower. On or about 5 p.m., David had a seizure.

During and after the seizure, numerous officers and prisoners were eye witnesses to a Lt. Rene, who is white, saying to David: “I hope he fuckin’ dies.” And he kicked him in the ribs.

I will write a grievance tonight, but please – as soon as possible – organize a phone zap to call or email Warden Chris McConnell at 318-765-3119 demanding that David Sumera be moved immediately to an appropriate facility where he can and will be given the medical attention and on-going care he needs.

During and after the seizure, numerous officers and prisoners were eye witnesses to a Lt. Rene, who is white, saying to David: “I hope he fuckin’ dies.” And he kicked him in the ribs.

As we know, federal and state prison systems have suspended visiting “privileges” using the COVID-19 pandemic as the excuse. This makes it even more important for us to act quickly and powerfully to hold administrations and staff accountable for the safety and care of those in their custody. Please act now.

John S. Dolley Jr., an Austin-based leading critic of prison administration wrongdoing, wrote to Warden Chris McConnell, who can be reached by phone at 318-675-3119 or by email at POL/ExecAssistant@bop.gov or jdjackson@bop.gov. Following is an excerpt, which you can use to craft your own message:

“I have learned of a very disturbing act of extreme unsympathetic and unprofessional behavior by a member of your staff, Lt. Rene, who said callously to prisoner David Sumera (37063-034), as he lay on the shower room floor, ‘I hope he fuckin’ dies!’ Rene also kicked Mr. Sumera in the ribs, adding to the cruelty.

“Apparently USP Pollock is not equipped for such serious medical problems, so I heartily recommend that Mr. Sumera be moved to a facility that can support such severe cases of paralysis, rather than let a poor soul wallow in his own excrement and urine, unnecessarily abused and unable to take care of himself. Please respond to this dire need for Mr. Sumera to get some immediate help!

“Lt. Rene’s attitude and abusive behavior ought to be dealt with appropriately by your administration as well. I trust you’ll act on this at once.”

Keith “Malik” Washington is assistant editor of the Bay View, studying and preparing to serve as editor after his release in September 2020. He is also co-founder and chief spokesperson for the End Prison Slavery in Texas Movement, a proud member of the Incarcerated Workers Organizing Committee and an activist in the Fight Toxic Prisons campaign and Liberate the Caged Voices. Visit his website at ComradeMalik.com. Send our brother some love and light: Keith “Malik” Washington, 34481-037, USP Pollock, P.O. Box 2099, Pollock LA 71467. 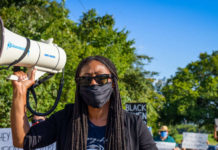 Will Texas Gov. Greg Abbott choose to save lives or save face?