The chase is on! Former Vice President Joe Biden is in hot pursuit of the almighty vote, along with all politicians. The election is just around the corner, and it’s important to remember that speaking to issues affecting all Americans is a key factor to a successful campaign. Americans – regardless of race or gender – want equal pay for equal work, decent jobs, good healthcare and a good education. Without these, American citizenship is just an empty status symbol without substance.

The similarities between politicians chasing the vote and a man chasing a woman are striking. However, our focus is the Democratic politician and candidate. The Democratic candidate represents the boy who has a steady girlfriend – represented by the Black woman. Imagine there are three other girls who catch his eye. One girl represents the independent voter, the other is swing states: Their elusiveness makes them even more desirable. Winning them is everything.

We don’t quit. Losing is not an option.

Remember, the Black woman is the steady girlfriend and the ride or die of this party. We are the base. That’s us! We are the cream of the crop, the boss of the vote – but a pushover if there ever was one. Regardless of his straying and taking us for granted, we welcome him back with open arms. If there is any possibility of this party wining, it is due to our vote.

Our vote is the honey of the Democratic Party. Yes! I compared it to honey because it is just that sweet. Mama said no commitment, no honey: Smart girls know this. Sisters! We must demand something for our vote. We need an agenda. Ladies, lets ride this donkey for all it’s worth. This is the most critical election in our country’s history.

Let’s take a Harriett Tubman stand: We don’t quit. We must win and move forward. Losing is not an option. This election will determine if the children who are born today will be America’s new capitalist field workers. We are the boss of the vote, and the agenda is in order.

Community activist Karen Mims can be reached at kmims048@gmail.com. 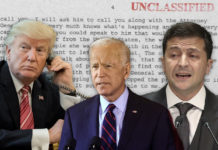 Donald in the Donbass, Biden in the crossfire