by Law Office of Yolanda Huang

Dublin, Calif. – Alameda County, which agreed to settle with a pregnant Santa Rita Jail prisoner after ignoring her screams for help and letting her give birth alone in solitary confinement, has failed to make its $200,000 in a court-ordered payment to the woman, on time.

“Candace Steel settled her case against Santa Rita Jail and California Forensic Medical Group – the jail’s for-profit medical provider – for their actions in placing a pregnant woman into solitary confinement and then leaving her there to deliver her baby alone, without aid,” said civil rights attorney Yolanda Huang.

“Alameda County should be ashamed of the conditions and conduct of its jail, its sheriff and its for-profit medical provider, and for what it did to Candace and her baby in 2017 and today,” said Huang.

Steel was jailed after getting a ticket for illegal camping when she lost her housing in 2017 because of low service worker wages. She has always worked in the fast-food industry

And because Candace, who was eight months pregnant, complained about cramps and pain, Huang said, “They stuck her into the solitary confinement cell. The nurse from Wellpath (California Forensic Medical Group, or CFMG), who had very little training, without doing a physical exam, declared it was false labor.

“Other prisoners reported they heard Candace screaming for hours, with not a single guard responding to her cries. She delivered her baby alone without help in that isolation cell.

The county, its medical provider CFMG and jail staff engaged in “barbaric conduct – conduct that is not condoned, and that has never been condoned, by any civilized society.

“We are lucky that, although the baby was born with the cord around her neck, there has been no permanent physical injury to the baby. Nonetheless, the disregard for the welfare and humanity of its prisoners is deplorable. It shows that despite these payouts, Santa Rita Jail has not learned its lesson. The only real action it has taken is to do an Orwellian act, renaming the ‘isolation cell’ the ‘holding cell,’” she added.

The original lawsuit, filed in August of 2018, charged the county, its medical provider CFMG and jail staff engaged in “barbaric conduct – conduct that is not condoned, and that has never been condoned, by any civilized society, much less the United States and the people of the State of California … motivated by greed.”

The pleading claimed Steel was placed in an isolation cell “as a means of disregarding her complaints of pain; placing her in isolation without adequate clothing, without a towel or blanket; ignoring her hours and hours of cries and screams; closing the grate on the door in order to muffle her screams; and only directing their attention to her when the cries of the baby could be heard.”

The suit contended the jail and its medical provider did not want to send Steel to a hospital because, “if a pregnant Santa Rita Jail inmate goes to the hospital to deliver her baby, CFMG pays. An inmate forced to deliver her baby at the jail does not cost CFMG anything additional … [the jail] is not equipped with labor and delivery rooms or with other necessary and basic equipment and facilities that are needed to care for women in childbirth.”

And, despite the settlement made in open court, neither Wellpath (CFMG) nor the sheriff has paid, charged Huang. 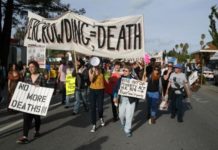