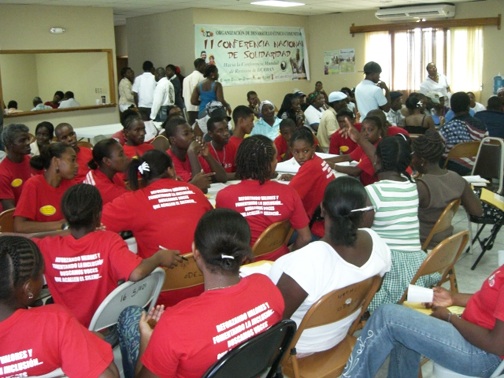 The racist assault on United States President Barak Obama by the Honduran military coup government, installed on June 28, 2009, was greeted by the U.S. media with what John Pilger called “contrived silence, a censorship by omission.” (Amy Goodman, Democracy Now, 7/6/09) The poisonous racist attack on the first Black U.S. president was based on racist preconceptions and was carried out by interim Honduran Foreign Minister Enrique Ortez Colindres on June 29, the day after the democratically elected president Manuel Zelaya was arrested and sent into exile in his pajamas.

The ex-foreign minister is courted for his reports on the coup and constitutional crisis but avoided on his assault on President Obama. The pattern of the U.S. media is to protect the racist coup government and oligarchy.

Honduran Foreign Minister Colindres referred to Obama as “that little Black boy who knows nothing about anything [ese negrito que no sabe nada de nada],” later adding, “a little black man who doesn’t know where Tegucigalpa (the Honduran capital) is [El negrito no conoce donde queda Tegucigalpa].” Colindres and the Honduran coup government are overtly expressing a poisonous, racist and white supremacist shibboleth in Latin America: that people of African descent and Africans are stupid, uncivilized and more appropriately belong enslaved on agricultural plantations.

Colindres concluded his government’s racist assault by associating Blacks with queers, prostitutes and leftists: “I have negotiated with queers, prostitutes, leftists, Blacks, whites. This is my job. I studied for it (probably in U.S universities or U.S. military schools). I am not racially prejudiced. I like the little Black sugar cane plantation worker who is president of the United States. [He negociado con maricones, prostitutas, con ñángaras (izquierdistas), negros, blancos. Ese es mi trabajo, yo estudié eso. No tengo prejuicios raciales, me gusta el negrito del batey que está presidiendo los Estados Unidos.]” ( FAIR Blog Honduras 7/10/2009)

The term “negrito del batey” refers to Haitian workers who migrate to work on sugar plantations in the Dominican Republic. It was popularized by the song, “El Negrito del Batey,” about a Haitian who “would rather leave work to the oxen” and go out dancing instead.

“For more than a week after they were uttered, Ortez’ slurs were a big story in Latin America and around the world: The Chinese and French wire services Xinhua and Agence France Presse covered them, among others. But besides online sites like Daily Kos and the Huffington Post, the story was mostly ignored by U.S. journalists, who otherwise freely quoted Ortez about Honduras’ coup and constitutional crisis.” (FAIR)

Congressman Donald Payne, D-New Jersey, of the House Subcommittee on the Western Hemisphere, expressed outrage at the coup government’s racist assault. He was told by Lanny Davis, former special advisor to President Bill Clinton and representative to the Honduran chapter of the Latin American Business Council, that the foreign minister had been “sacked” or fired and that Colindres was a “far out extremist bigot.”

Payne seemed further outraged by Davis’ attempt to trivialize and dismiss the foreign minister’s poisonous, racist preconceptions and to make his views an exception. Payne responded forcefully that “he (Colindres) was hired by the same people who arrested the President and took him out of the country and that he must reflect the philosophy and opinions of the Honduran coup government. Honduras’ military government is now protected by Hillary Clinton’s U.S. State Department contrary to the policies of the Obama White House.

Bernard Chazelle, a Tiny Revolution blogger (6/28/09) said of the Honduran coup, “There’s no way this would have happened if the U.S. had said no.” Chazelle also cites Honduras’ decision to delay the accreditation of the U.S. ambassador in solidarity with Bolivia as the basis of the bad blood between the U.S. and the Zelaya government.

It is also clear that Noriega, Reich, Lanny Davis and other Clintonites are using the vicious Honduras coup to attack Chavez of Venezuela, Correo of Ecuador, Morales of Bolivia, Castro of Cuba, Ortega of Nicaragua and all the progressive governments and people of Latin America. These Clintonites, Bushites and Reaganites want another Haiti where Aristide was removed by the U.S. with impunity and where former U.S. President William Jefferson Clinton has been appointed as special United Nations ambassador.

Five hundred fifty U.S. military personnel are stationed at Soto Cano Air Base in Honduras. During the 1980s Honduras received $l.6 billion in U.S. foreign aid. This has decreased substantially following the end of the Contra wars in Central America.

U.S. exports to Honduras in 2004 were valued at $3.1 billion, half the value of Honduras imports. Two thirds of Honduras’ exports, valued at $3.6 billion, are destined for the U.S. These exports include bananas, seafood, electrical wiring, gold, tobacco and coffee.

This tiny country of 7.6 million people would collapse economically and militarily if the U.S. were to impose an embargo as the coup requires it to do. Honduras is the second poorest country in Central America with an “extraordinarily unequal distribution of income and high unemployment.” Its 2007 unemployment rate was 27.8 percent; its 2008 inflation rate was 11.8 percent. Its economic growth depends on the economy of the U.S., its largest trading partner. (2009 CIA Fact Book)

Ninety percent of Hondurans are mestizos (Amerindian and European), 7 percent are Amerindian, 2 percent are Black, including 98,000 Garifunas, descendants of unenslaved Blacks and Indigenous Caribs from St. Vincent. One percent of the population is white. The Honduras census doesn’t account for the Amerindian and African mestizos, which would produce a much larger percent for the Black Honduran population.

This census error is repeated throughout the Americas, thus revealing a smaller percent and number of people of African descent in the Americas. Congressman Payne noted that President Zelaya came to New York to swear in the leader of an Afro-Honduran organization. He must not be too bad, Payne noted, at a subcommittee hearing.

It seems obvious that the Honduran military coup is about the United States’ support for Hispanic racist and white supremacist oligarchy control in the Western Hemisphere. The people of the United States must press our government to cut off private and public economic and military ties with Honduras until President Manuel Zelaya is restored to power unconditionally and without prejudice.

The North American people can also boycott Honduran coffee and bananas, its major imports to the U.S. Vamonos!