Update (below): The assassin with the shotgun 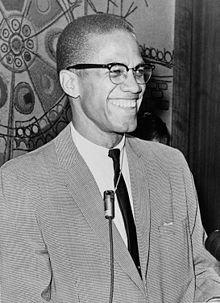 In the afternoon of Feb. 21, 1965, I went to the Audubon Ballroom to hear Malcolm X speak. I also went to sell the newspaper, The Militant, a radical newspaper that printed the truth about Malcolm X, published his speeches and publicly defended him.

When I got to the ballroom, things were radically different – there were no cops. Normally, Malcolm’s meetings in Harlem were crawling with cops. As I was selling papers, Malcolm X approached the Audubon Ballroom. I offered to sell him the latest issue, but he told me, “Not today, Roland. I am alone and in a hurry.”

A while later as I entered the meeting room, again I did not see any cops. I went in to sit down where I normally sat along with the rest of the press in the front and the left side of the room. On the way to my seat, Gene Roberts, who later surfaced as a police agent member of the Black Panther Party, told me that I could not sit at my regular place but that on that day I had to sit in the front row on the right side of the hall, facing the stage.

As I sat down, I glanced over to where I normally sat and saw a large Black man with a navy blue-gray trench coat. When the meeting started, all was quiet as the crowd listened to Benjamin X introducing Malcolm X.

When Malcolm approached the podium, he gave the normal Muslim greeting for peace. At that point a disturbance occurred in the room. Two men were standing about halfway back in the room and to the right of Malcolm on stage. One was shouting, “Get your hand out of my pocket!”

Malcolm was trying to calm things down, when the men – one later identified as Talmadge Hayer – started running down the right aisle shouting and firing a pistol at Malcolm and ran out the exit doors by the stage, to the right of Malcolm X. 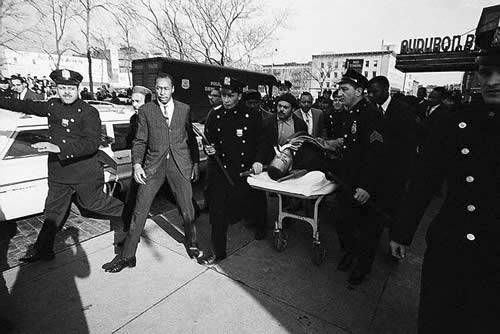 Suddenly I heard gunshots fired from all over the place, and I instinctively hit the floor. When I looked up, I saw Malcolm X standing up and glaring down at one of his assassins. At that point, from the corner of my eye, nearby to my left, I saw a flash from a gun as I watched Malcolm X fall down and back about 10 feet.

In that instant, as Malcolm died before my eyes, I suddenly realized how big he was and I realized that he was a giant in stature and in the world. This vision of Malcolm X, being assassinated, has haunted me ‘til this day.

The fatal blast, which I later found out to be from a shotgun, came from the area where I had seen the large Black man with a navy blue-gray trench coat! When I left the hall, Malcolm’s bodyguards told me that they had caught two of the assassins, one who was shot – Talmadge Hayer – and one whom the police took away.

A few weeks later, when I was questioned in the Harlem police station, I was shown a series of photos of people whom I recognized as members of the Nation of Islam or Malcolm’s organization. I also saw a picture of the large Black man with a navy blue-gray trench coat that I had seen at the Audubon Ballroom.

I was thinking of how to respond to the cops and how to say that I did not recognize the photos of Malcolm’s friends and supporters and the members of the Nation of Islam. I then told the cops that I had to go to the rest room.

When I got to the men’s room door, I saw the same large Black man coming out of the men’s room that I had seen in the Audubon Ballroom and in the photos that had just been shown to me. Then he walked by me, past the desks of the secretarial pool, and went to his office inside the police station!

At that point I knew that he and the government either killed Malcolm X or were part of the assassination plot. I became very nervous thinking about what I was going to say to the cops when I got back and how I was going to get out of the station alive.

I then came up with, “I cannot recognize anyone, for all Black people look the same.” The cops nodded in agreement and we were allowed to leave the police station.

Malcolm X was one of my heroes. He was the most honest mass leader that I have ever known or seen. He was a great orator and his speeches seemed like a conversation between himself and the audience.

His speeches were like music to my ears and have inspired me for the rest of my life in the fight for social justice. He was so human in his orations. I still remember him when he made the “Harlem Hate Gang Scare” speech at the Militant Labor Forum on May 29, 1964, and other speeches in which he chuckled a “heh heh” when he was about to make a special comment. 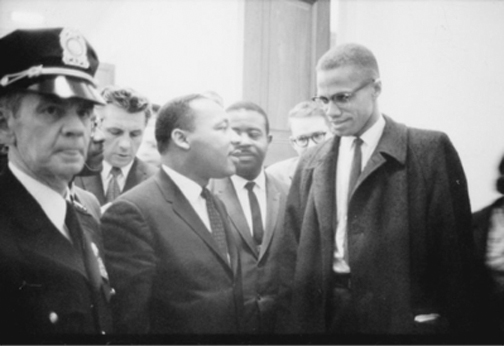 Both he and Martin Luther King had come to similar positions about capitalism and the Vietnam War at the time of their death. That is why this government assassinated them. No one has followed in their footsteps.

From the point of view of this government, the world leader in political assassinations, the two assassinations worked. For to this day, no mass leader has had the courage to pick up where they left off. They were able to silence the art, science and truth of these two great orators. To me, Feb. 21 is “the day the music died.” It was the saddest day of my life.

Update: The assassin with the shotgun

On April 30, 2010, I received an email from John Judge, director of the Coalition on Political Assassinations, referring to an April 22, 2010, article titled “For the First Time in History, The Face of William Bradley, Shotgun Assassin of Malcolm X-El Hajj Malik El Shabazz, in a Public Safety Campaign Commercial for Mayor Cory Booker!“ by Abdur-Rahman Muhammad. 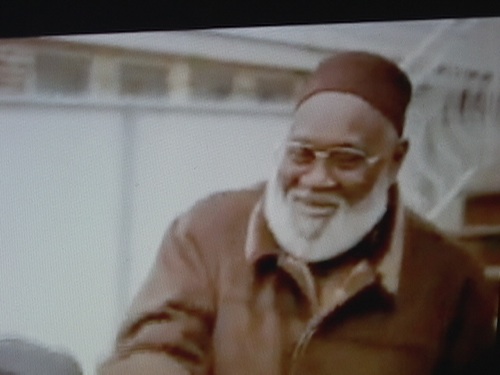 In that article is the picture shown here of William Bradley, who is the man that I had seen in the Audubon Ballroom and in the photos that the Harlem police showed me while I was being interrogated. Bradley was the man I saw coming out of the men’s room, walking by me, past the desks of the secretarial pool, and into his office inside the police station, as I was going to the men’s room!

As I wrote in my original 2009 essay (above): “At that point I knew that he and the government either killed Malcolm X or were part of the assassination plot.” And now I knew his name.

In his article, Abdur-Rahman Muhammad states: “Although his name has been in the public domain now for well over three decades, ever since 1977 when Hayer filed his affidavit with famed lawyer William Kuntsler naming his accomplishes, nevertheless a face has never been attached to the name. Historian and member of the committee researching this story Zak Kondo published a marvelous book two decades ago on the assassination of Malcolm X, wherein he explored quite a bit of biographical material on the five assassins. Spike Lee even named the five killers in the credits of his movie. But in all of these years none of them, including ‘Willie’ Bradley, has ever filed a libel suit. And for good reason – they would lose.”

I was interviewed by Glen Ford of Black Agenda Report on May 8, 2010.

I spoke at the Coalition on Political Assassinations Feb. 21, 2010, meeting on the 45th anniversary of Malcolm X’ assassination, “The Threat of a Black Messiah.”

This is a clear audio of the same meeting.

This video, “MALCOLM X The Assassination of Malcolm X,” shows the police catching a second man after Malcolm’s assassination.

A new improved video, “The Hunt for William Bradley,” by Karl Evanzz in association of Shabazz Productions, identifies the man rescued from the crowd by the police as William Bradley. The video is contained in a collection of clips titled “Naked Lies: The Continuous War Against Malcolm X.” Shabazz Productions had previously produced: Omar Shabazz “Inside Job: Betrayal of the Black Messiah.”

Roland Sheppard is a writer and activist and former BA of the Painters Union in San Francisco. Email him at rolandsheppard@gmail.com and visit his website, http://web.mac.com/rolandgarret. 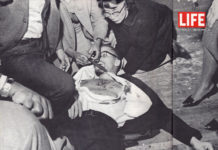