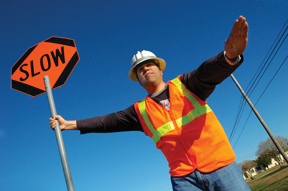 There is a finite amount of construction work in this country, in any state, in any county and in any city. Craft unions try to exclude from work all craft workers who do not belong to the union. They must limit the number of people who can enter the unions. That means whoever runs a specific trade union must keep the number of members of that trade low by excluding as many people as possible.

The color of the craft union leadership is not material. The color of the unemployed is relevant. The extremely high unemployment in the Black community triggers the federal funding. Yet this community gets almost no JOB benefits.

What did they do? They did not train the unemployed. Instead of training the unemployed, they chose to import trained craft workers from other jurisdictions. They paid these workers bonuses.

Who will the unions favor? Will the craft unions train more workers to compete with their existing membership for the few jobs that exist? I think not.

My criticism of the craft unions is constructive. I oppose the project labor agreement that the craft unions have extorted the local legislators into signing. I am appalled that our elected officials do not have the strength to resist union proposals that hurt Blacks and other minorities.

Project labor agreements were signed by public agencies because unions sold them insurance, just as the mob does. If you buy insurance from me, your windows will not get broken, so says the mob. The craft unions tell public agencies, if you sign a PLA agreement, there will be no strike.

To illustrate why Blacks are not working, I site the Beth Eden contractor. This is unrelated to the PLA. If you add a government-required PLA the problem is worse.

One of my construction companies proposes to submit a drywall proposal to the White union general contractor whom Beth Eden hired to construct their new building. Such a proposal is acceptable only if my company signs a hiring hall agreement with the union. If my company does not sign such an agreement, this contractor will not do business with me.

This situation illustrates the employment and training problem faced by the Black community. If my company signs the union agreement, then it must hire only union members from the union hall.

This example is a little understood problem with the craft unions. The Black community continues to support craft unions while they effectively lock out the Black community from construction jobs. This is why you do not see Black men and women working on any projects, even in our own communities.