“Don’t give up. He will never jail a whole nation.” – Victoire Ingabire Umuhoza 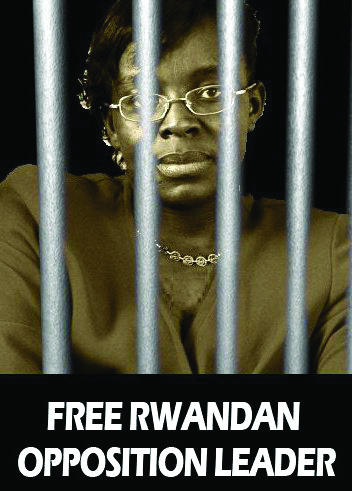 We need an international movement to free Rwandan opposition leader Victoire Ingabire Umuhoza. Her case is important to African people all over the continent and in the Diaspora and to all of us, all people.

The weight on Victoire’s shoulders is that of resource war, the ongoing wars for the world’s natural resources that threaten to destroy the whole planet. The fate of her tiny East African nation, Rwanda, is intertwined with the resource war in Rwanda’s vast, resource rich neighbor, the Democratic Republic of the Congo, site of the most lethal conflict since World War II. The Congo conflict has taken over 6 million African lives since 1998 alone.

Background of the Congo conflict, in Rwanda and Uganda

In 1990, the U.S. and Uganda backed the invasion of Rwanda, from Uganda, by an army of ethnic Tutsis who had grown up in Uganda, the children of Rwandan refugees. Four years of bloody civil war left over a million Rwandans dead, and Rwanda then joined Uganda and Burundi, the other two nations on Congo’s eastern border, in invading Congo, first to overthrow Congolese dictator Mobutu Sese Seko and then to overthrow his successor, Laurent Kabila, the onetime ally who had proven less than compliant in their project: the ongoing occupation, de facto colonization and resource plunder of eastern Congo.

A peace treaty was signed in 2003, but the death toll in Congo continues to rise. The majority of war dead perish of hardship after being driven from their resource rich land, rich in minerals, timber, cropland, fresh water, oil and natural gas, everything that feeds the world’s industrial and military industrial machines and the global capitalist system’s insatiable demand for profit.

I don’t believe that Victoire went home to Rwanda, after 16 years spent first studying, then working and raising a family in the Netherlands, to take on so much weight, the weight of resource war threatening the whole world, but that is the broad context in which her own people are suffering. She said she was returning home because she could no longer stand to see her Rwandan people suffering so, under such brutal dictatorship. By that time, January 2010, she had emerged as the most inspiring and intellectually forceful leader in the Rwandan Diaspora.

I first became aware of Victoire when I saw demonstrations amongst the Rwandan Diaspora in Europe. She was then under house arrest in Rwanda and they were lined up in Brussels, holding her picture and chanting “Victoire! Victoire! Victoire!”

As a journalist, I maintained my distance for some time, making my way through all the available information and asking myself, “Who is Victoire?” I knew American radicals who were suspicious of her. They imagined that she was the Pentagon and State Department’s chosen successor to Paul Kagame.

I still don’t know just why they imagined that, though it seemed perhaps because she hadn’t been arrested, or rather, had only been placed under house arrest, forbidden to leave Kigali, Rwanda’s capital, to speak to the majority Rwandan population, rural peasant farmers, whom she hoped to represent. Her political party was not allowed to register and she was not allowed to run in Rwanda’s 2010 presidential election.

Victoire was finally arrested and incarcerated two months after the election she had been excluded from, and several days after the last time I spoke to her for Pacifica Radio station KPFA. We had by then spoken many times, for KPFA and for WINGS, Womens’ International News Gathering Service. She has been in maximum security prison ever since.

Her Rwandan support team now reports that she is ill, without a doctor’s care. This worries me because, earlier this year, Rwandan American Law Professor Charles Kambanda told me that he did not believe Rwandan President Paul Kagame would release her from prison with her faculties intact. Pasteur Bizimungu, Kagame’s last major challenger, has been released, but he is, by all accounts, not the same man who entered Rwanda’s prison system, one of the most overcrowded and notorious on earth. Rwanda’s per capita prison population is second only to those of the United States and Russia.

Professor Kambanda said that Victoire is a great leader, capable of leading Rwanda, whose conflict has spilled into eastern Congo, to real reconciliation – between African people who have been manipulated by foreign powers to the point of human catastrophe. But Kambanda also thinks Victoire is such a great leader that Rwandan President Paul Kagame will never let her leave prison alive, or with her faculties intact.

I hope he’s wrong, because we need her. Rwanda, Congo, Africa and the world need her.