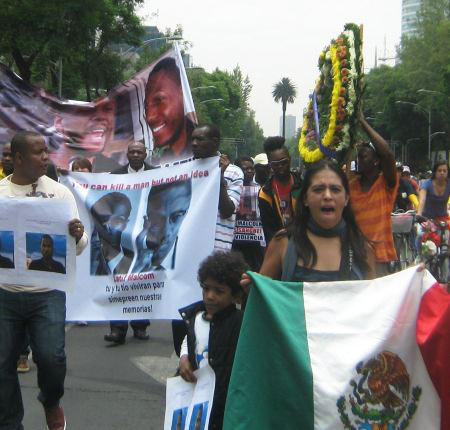 One month after the brutal murder of Malcolm Latif Shabazz in Mexico City, about 30 people gathered at the Angel of Independence (a landmark where celebrations and protests are often held) to demand justice in the case. The demonstrators convened by the Steering Committee in Defense of the Naturalized and Afro-Mexicans (CCDNAM) carried banners and placards on a march through several blocks from Paseo de la Reforma around the U.S. Embassy before returning to El Ángel to place a floral offering there.

Given the prestige of the grandson of Malcolm X in the national and international press, the official explanation of his death does not take into account the surveillance and harassment of the FBI and local police against him before the silence (or absence?) of the person who invited him to Mexico and accompanied him to a seedy nightclub near Plaza Garibaldi. In contrast to a docile press that easily accepts the official version of the murder without inquiring into the case, they honored the memory of the young man who in the last years of his life fought to take up the legacy of his grandfather.

The banners and signs had messages like “Justice for our brother Malcolm Latif!” “Justice for all!” “No to violence!” “No more blood!” “You can kill a man but not an idea.” “Malcolm, you and your grandfather will live forever in our memories!” It was a little surprising to see two small American flags in the event, which for many in the world are terrorist symbols and certainly the enemy of both Malcolms. But a fellow explained that for him the flag was a sign of confidence in the people of this country to do the right thing. 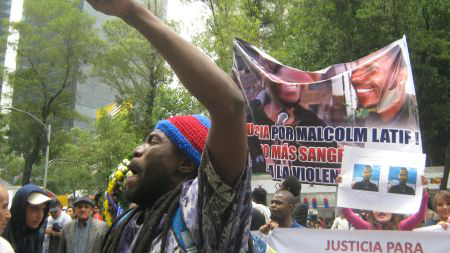 By placing the wreath at the Angel of Independence, Dr. Wilner Metelus, of Haitian origin and a Mexican citizen, expressed support for the family of young Malcolm and their commitment to fight until justice is done in the case.

He said: “We are here to support our brother Malcolm Latif who died last month in Mexico. To us, it was a hate crime.

“We are indebted to Malcolm X, one of the great leaders of the past century. So we cannot stay silent over the manner in which they killed our brother Malcolm Latif. His family lives in the U.S. and we are showing that we are with them, that they are not alone.

“We’re here to help our brothers in other countries who are supporting this fight. And we are in solidarity with thousands of Mexican families who have lost loved ones. We know that in this country there is no justice. We as humans have to fight. 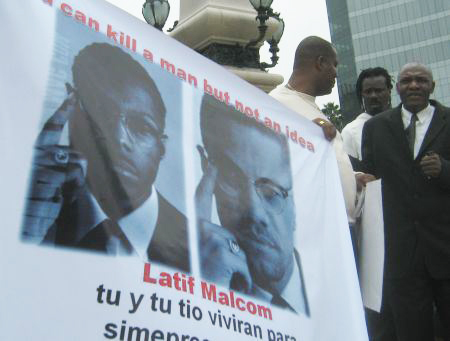 “We will not be silent. We are paying the debt we owe to Malcolm X. The reason we are here and that I think today’s event will gain more strength is that we know Mexico is a country united and the time has come to show that solidarity with other peoples.”

It should be noted that after surviving many difficulties during his childhood that led to his imprisonment for several years, Malcolm Latif Shabazz learned a lot from these experiences as well as his reading of the books by and about his grandfather, Malcolm X, and other thinkers.

During the last years of his life he traveled extensively, participated in international meetings and gave talks at several universities and communities within their country. In his talks and interviews, often spoke of the serious problems of mass incarceration and police violence in Black and Latino communities in the United States and highlighted the need for education and unity in the fight. 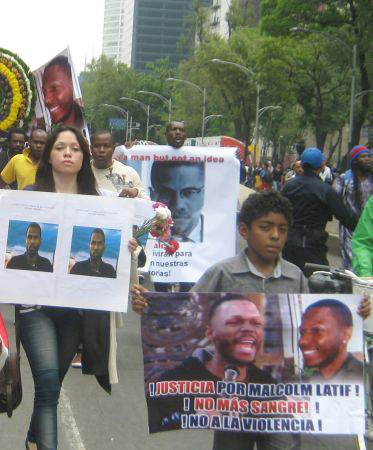 To give just one example, in an interview with Press TV on April 17, 2012, young Malcolm spoke of the situation in the prisons of the country, stressing that this is a continuation of institutionalized racism: “(W)hat happened, they didn’t have so many prisons here in the U.S. during slavery and when they so-called abolished slavery, that’s when they came up with this prison industrial complex.

“And in these institutions people are forced to work, and for pennies on the dollar. If you look at the U.S. Constitution it says that slavery is abolished except for those that serve within these penal institutions.

“So technically, by the book, those that are in prison are considered to be slaves. And that is why they can be forced to work for less than the minimal wage here in the U.S.”

On March 9, 2013, Malcolm Latif Shabazz published a summary of harassment he had received from the FBI and local police. In this statement, he makes the following comment that can be interpreted as a premonition of his own death:

“The formula for a public assassination is the character assassination before the physical assassination; so one has to be made killable before the eyes of the public in order for their eventual murder to then be deemed justifiable. And when the time arrives for these hits to be carried out, you’re not going to see a CIA agent with a suit and tie and a badge that says ‘CIA’ walk up to someone and pull the trigger. What they will do is to out-source to local police departments in the region of their target, and to employ those that look like the target of interest to infiltrate the workings in order to set up the environment for the eventual assassination (character, physical/incarceration, exile) to take place.”

Two months later, the grandson of Malcolm X is assassinated in Mexico physically and morally. For the machinery of (in)justice, his death is simply a crime like any other. For the trade press, the cover-up is almost a given. But among people aware, concern grows. The circumstances of his death are too questionable considering the weight of his family history: His great-grandfather, a follower of Marcus Garvey, was killed by the Klan. His grandfather was killed as he promoted African American unity, claimed the right to self-defense and carried the fight for human rights to the international stage. As Dr. Metelus said, our debt to Malcolm X is great.

The placing of a wreath at the Angel of Independence was the first event organized in Mexico City to demand justice for Malcolm Latif Shabazz. Hopefully not the last.

To sign an online petition demanding a thorough investigation of his murder, go to Change.org.

This story first appeared on amigosdemumiamx, a Mexican site dedicated to the liberation of Mumia Abu Jamal.