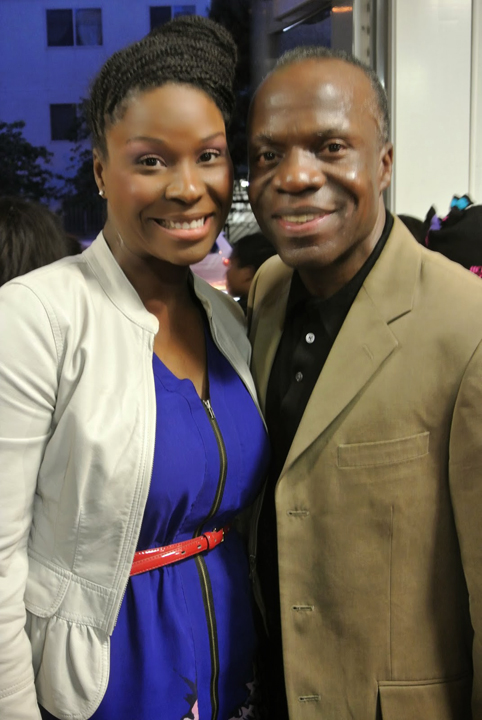 African American Shakespeare Company in San Francisco is our community’s premiere showcase for classical theatre through the lens of the African American experience. Their holiday show is an anticipated family event that did not disappoint this season in its current incarnation as a musical.

Back are the stepsisters in drag – AASC veterans Twon Marcel as Zonita and B. Chico Pudiman as Shaniqua. The lovely protagonist, portrayed by Kimille Stingily, sings just as sweetly, set off wonderfully by the brooding Prince Charming, portrayed by Dedrick Weathersby. The Page (Cal Edwin Parker) is a funny and witty contrast to his elder, the Duke (actor Dwight Dean Mahabir). I like the way he keeps the moment at hand in perspective (smile).

Typically, the story starts with a prequel: A grandmother (Eleanor Jacobs) is teaching her granddaughters (Xiomara Larkin and Ayanna Cornelius) about gratitude and benevolence. The curtain rises on Clara McDaniel as the Evil Stepmother. She is too lovely and charming to have produced such children, but in the cosmos, I guess we don’t always get a choice in such matters (smile).

In the Sargent Johnson Gallery, also on the main floor of the African American Art and Culture Complex (AAACC) where the Buriel Clay Theatre is located, is “The Uncle Junior Project presents: Entrapment to Entertainment,” which looks at Black history in the American circus and the notion of freak shows. The exhibition is thematically similar to the “Cinderella” story.

What is a freak and who says who can belong and who doesn’t belong in any given society, whether that is real or fictional America?

The objectification of children and adults who are physically different than those of us born with one head verses two, two legs instead of four, average height instead of 7 feet or 2 feet tall are just a few of the amazing images in the exhibition. The exhibit is up through Jan. 2, 2014, in the Sargent Johnson Gallery, 762 Fulton St. in San Francisco. There is no entrance fee.

The photos of conjoined children, tiny adults as well as statuesque women, along with stories of Blacks in circus history, first trapeze artists and clowns, ring masters, is an interesting play on the notion of masking and who wears what mask and why. 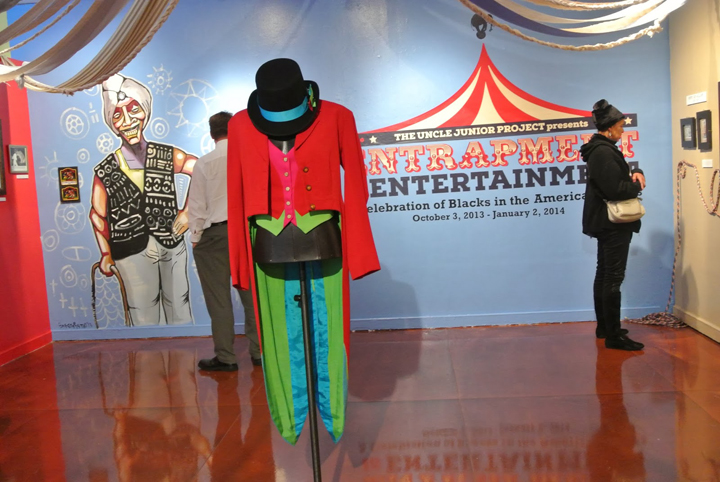 A lot has been seen this artistic season thematically in Bay Area theatres on W.E.B. DuBois’ notion of two-ness. “Cinderella” certainly has to negotiate what she knows to be true of herself and what is projected onto her, including the false name. We never learn her true name. She is more than ashes in a hearth or cinders, although like Kali, she also had a metamorphosis or rebirth after the death of her father almost signaled her demise as well.

An aspect of her life I really like is depicted in the scene where the Fairy Godmother (Monica Cappuccini) tells her to remember. A younger happy Cinderella (Angelia Richardson) dances with her father, her little feet on top of his. I recall one season where Luther sang “Dance with My Father” as the two actors performed on stage. I saw patrons wiping their eyes.

And when one thinks about the children shackled to an occupation where people pointed at them, laughed and made fun of their physical person – a vehicle they could not walk away from or leave behind – where did they go in their imaginations? 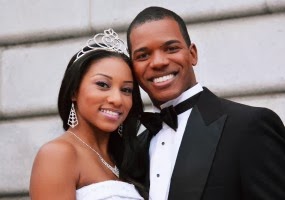 The collaboration between AASC Artistic Director L. Peter Callender and lyricist Angel Burgess, with composer Michael Moreno, was magical. As already mentioned, each scene presents a lesson we can all reflect on and now that it’s been set to music, African American Shakes will probably be releasing a CD next year so we can take the lessons home with us to rehearse for the year to come – not that the music will stay the same (smile).

Peter said it won’t, but like we loved our “Black Nativity” at Lorraine Hansberry, which Stanley F. Williams rewrote each year and recorded a few versions of, such will be African American Shakes. We will buy the CD each year … just because.

How often does one see “Cinderella” in splendid technicolor? Only in San Francisco, only through Dec. 22, only at African American Shakespeare Company, so get your tickets and prepare to be enchanted. Visit www.African-AmericanShakes.org, (415) 762-2071, ext. 6.

There are free school time performances Thursdays, Dec. 12 and 19, at 10 a.m. – Teacher’s Night Out each performance. This one was Dec. 6 at 7:30 p.m. There is also a Shake-It-Up Programming where AA Shakes will come to partner schools to host workshops. The company also provides artist-in-residency opportunities.