Devaughn Frierson Jr., better known as Bo, endeavors every day to protect his community and, like the Black Panthers, he doesn’t turn his back to abuse by police. As a community journalist who is a Black disabled man like Bo, I wanted to get to know what drives this activist, who is a hero to his neighbors but was treated abominably by San Francisco police.

Watch the two original videos below.

“The guy in the wheelchair and the guy sitting on the ground are my cousins,” Eduardo told the Free Thought Project. “The police are community police; they know everyone in the neighborhood.”

Those officers know that Bo is paralyzed and makes it his business to watch out for the community. So they shouldn’t have been surprised that he wheeled across the street when he saw them brutally handcuffing his cousin.

What shocked everyone when that video and another began to circle the world in an Associated Press story was an effort by one of the officers to “dump” Bo out of his chair. Fortunately, his seat belt caught him. But no one should be surprised that the attacking officer blamed the victim, claiming Bo ran over his foot.

What shocked everyone when the story began to circle the world in an Associated Press story was an effort by one of the officers to “dump” Bo out of his chair.

“If you look at the video, he doesn’t jump or react in a way that a person (would) who just had his foot run over. He said that when he realized he was being filmed,” explained Eduardo. “He tried to flip him because he didn’t like my cousin confronting him about slamming my other cousin on his head. He didn’t like the truth being told to him, so he tried to flip him out of the chair. That’s what the conversation (was about that) he and the cop were having prior to the cop grabbing his chair.”

“Dirty racist cops!” exclaimed Bo’s cousin, Sqaully Dee, in a message he posted on his Facebook page with the video the day of the assault. “Officer Carrasco, No. 1341, just did this to my cousin. I’m pissed off right now.”

“If you didn’t know,” he added, “this is how San Francisco’s finest celebrate MLK Day! Look at the other ‘good cop’ turn his head as if he didn’t see his partner attempt to kill a disabled man. Let’s see if he stands by the blue wall of silence.”

Leroy Moore: Now we know from the video what happened to you by SFPD, but very few know about you. Tell us about you. Where do you live and have you seen a difference in your neighborhood?

Bo Frierson: I’m currently residing at Laguna Honda Hospital. Well, I believe police oppression is a big problem – always has been in my eyes. The police consider everyone residing in a poor neighborhood to be criminals.

Leroy Moore: You are a Black disabled man. What do you think about what is going on in San Francisco toward the Black community in this gentrification that has swept through many major cities?

Bo Frierson: It’s not good at all. It’s like they are pushing Black people out of the community. It’s ridiculous. They are making it legal for police to abuse and murder innocent people. I feel we have no civil rights.

Leroy Moore: Let’s get back to the incident that involved SFPD. Tell us what happened.

Bo Frierson: Under the advice of my attorney I will not speak too much about the incident, but I will say this: The video is self-explanatory.

Leroy Moore: As a Black disabled activist, I know many people who use power wheelchairs, and I used to play sports with athletes using power wheelchairs and had my feet run over. The police said you ran over his foot, but what I saw in the video, it didn’t look like that. If you had, from my experience he would be in more pain. Please explain.

Bo Frierson: I didn’t run over his foot. If I ran over his foot and I weigh 200 pounds and my wheelchair weighs 350 pounds, he would have had an immediate reaction of pain. He didn’t show no reaction. And he also didn’t say anything about his foot until he noticed he was being filmed.

Leroy Moore: What do you think about BlackLivesMatter?

Bo Frierson: I strongly agree that Black lives matter and wish more people would realize that.

Leroy Moore: Many mainstream reporters would look at the video and ask why you went over to the area where the police were. I know for me, seeing many times Black men sitting on the corner in a row in handcuffs, I felt like I wanted to do what you did. 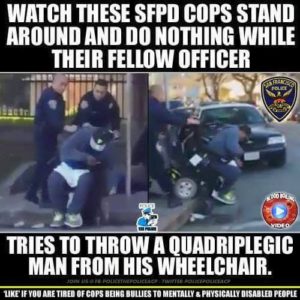 Bo Frierson: I went over there to witness the assault that the officers were committing on my cousin and lifelong friend. The officer didn’t allow me to witness it and instead chose to assault me also.

It just pains me to see police abuse their authority, and we are just helpless to the oppression. I feel like if we speak up about the police abuse, we are either jailed or beat up or even killed – and it’s just wrong.

Leroy Moore: Why do you think mainstream news brought up that you live in a nursing home in San Francisco?

Bo Frierson: I do live in one and I have no idea why they would bring that up.

Leroy Moore: When people see the video, many are shocked, but they don’t tie it to other police brutality against Black and Brown people with disabilities – and many have been tipped out of their wheelchairs by police.

How would you keep your story out there? And do you plan to advocate for more awareness in general about cases like yours?

I want to be a voice in letting the world know how police treat people of color, people with disabilities.

Leroy Moore: What do you think should happen to the cop who tried to push you out of your wheelchair?

Bo Frierson: I think he should be fired and do prison time because he’s an officer that has been doing this for a long time in our community, and it seems like he’s unstoppable. I would also like for the other officers to be disciplined.

Leroy Moore: Like we began this interview, tell us an important thing about yourself that people should know. And if people want to follow your case and help, tell us how can we contact you?

Bo Frierson: I’m the guy that everyone likes. I’m always smiling. I’m loved by everyone in the community and looking forward to being voice of the voiceless.

I want to be a voice in letting the world know how police treat people of color, people with disabilities. At the moment, I reside at Laguna Honda rehabilitation hospital. Hopefully, when they take me off these pain medications, I will be reachable and continue with my activism.