Representatives at the forefront of the movements for Black lives and racial justice took a historic trip to Palestine in early January to connect with activists living under Israeli occupation. 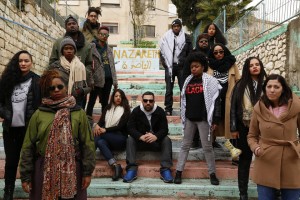 The trip comes after a year of highly-publicized repression in Ferguson, the Gaza Strip and West Bank, including East Jerusalem, as well as solidarity between these places.

Ahmad Abuznaid, Dream Defenders’ legal and policy director and a co-organizer of the delegation, said that the goal of the trip was to make connections.

“In the spirit of Malcolm X, Angela Davis, Stokely Carmichael and many others, we thought the connections between the African American leadership of the movement in the U.S. and those on the ground in Palestine needed to be reestablished and fortified.”

Abuznaid said the trip represented a chance to bring the power of Black organizing to Palestine.

“As a Palestinian who has learned a great deal about struggle, movement, militancy and liberation from African Americans in the U.S., I dreamt of the day where I could bring that power back to my people in Palestine. This trip is a part of that process.”

Over the past week, the delegation has met with refugees, Afro-Palestinians, a family that was kicked out of their house by settlers in East Jerusalem, and organizations representing Palestinian political prisoners, Palestinian citizens of Israel, and the Boycott, Divestment and Sanctions movement (BDS).

Black Lives Matter co-founder Patrisse Cullors said apartheid is what immediately struck her about what she saw on the ground.

Charlene Carruthers, national director of BYP100 said what immediately struck her was the capacity for violence, even when it’s not immediately noticeable to foreigners.

One such example is in the narrative projected against Palestinians. Carruthers recalled their delegation crossing paths with a tour group led by Israeli authorities.

“They were clearly receiving a completely different story about the occupation. It’s deeper than just spreading lies, the false narrative is violent.”

Brown also commented that the struggles are not the same.

“This is not to say there aren’t vast differences and nuances that need to always be named, but our oppressors are literally collaborating together, learning from one another – and as oppressed people we have to do the same,” she said.

For Steven Pargett, communications director for Dream Defenders, visiting the Dheisheh Refugee Camp outside of Bethlehem made these connections clearer: “A camp doesn’t have to have a fence with barbed wire all around it in order to be a place where displaced people are struggling to survive.”

Pargett said that Black people in the United States are also displaced refugees.

“Our refugee camps are lower income communities and project buildings all around the country that many would not be living in had we not been taken into slavery generations ago. Rather than having the Israeli Defense occupation in our hoods, we have the occupation of police officers who often prove to have little regard for our lives, being that they are not from these communities,” Pargett wrote.

Hip-hop was a unifying force for the delegation, Pargett said, commenting that Palestinians have been inspired by hip-hop in the U.S. and use it as a tool to amplify their own voices.

St. Louis-based rapper and activist Tef Poe said his experience in the camps connecting through hip-hop was the best day of his life.

“A refugee camp with a bunch of people fighting for their lives and using hip hop to lift their spirits and spark the minds of the children and break down gender barriers between young girls and boys,” Tef posted to Facebook. “I spent a day with these ppl .. Most amazing day of my life. Thanks be to the Most, the struggle is beautiful.”

This trip is another chapter in the recent history of Black-Palestinian solidarity. In November, a group of 10 Palestinian student activists visited Ferguson and St. Louis, meeting with people organizing in the streets.

A month later, upon their return, the students hosted a series of events at their university in the West Bank to raise awareness with the Black struggle and stand in solidarity. Dream Defenders unanimously passed a resolution to support the Palestinian Boycott, Divestment and Sanctions movement in this interval.

This trip is another chapter in the recent history of Black-Palestinian solidarity.

Moving forward, delegates expressed a desire for Black and American action in support of Palestine.

“I believe the Black Lives Matter movement can benefit greatly by learning about struggles outside of the U.S., but particularly the Palestinian struggle,” said Patrisse Cullors. “I want this trip to be an example for how Black folks and Arab communities can be in better solidarity with one another.”

“I want us to take back things we can do in the now, as Americans, to raise awareness and action around Palestinian liberation. I want us to reimagine what society could and will look like when we’ve dismantled this white-supremacist patriarchal and capitalist society. I want us to do it together. I want to bring back these conversations and stories in hopes that it will help add to this global struggle to get free.”

Kristian Davis Bailey writes at http://www.kristianbailey.com/: “In the span of two years, I have spent a summer learning about inequities facing the Native American community, traveled to Cape Town and seen how the legacies of apartheid continue to live on, spent 10 days in Mexico learning about the relationship between authentic journalism and social movements, and lived in Detroit for seven weeks witnessing firsthand the power of visionary grassroots organizing before finishing up the summer with five weeks in Palestine to learn about life under military occupation firsthand. The more I see, the more I know and the more I know the more I understand how intrinsically so many of the justice issues we care about are interwoven in a network of mutuality, in a single garment of destiny – to paraphrase Dr. King. Right now, I am working as a research assistant at the Martin Luther King Research and Education Institute at Stanford, in addition to doing freelance journalism. Contact me at kbailey@stanford.edu.” This story originally appeared on Ebony.