Re: Racist treatment of prisoner, threats and retaliation at Pelican Bay State Prison during and after visit

My friend James Crawford, D-05996, is currently incarcerated at Pelican Bay State Prison, and I was recently able to visit him, on March 21, 2015, along with my companion.

When I visited, Mr. Crawford let me know that the guards were “not happy” with his having “visits from white women” such as myself and my companion. I was surprised to hear this kind of blatantly racist attitude and remarked on it to several people who knew we were visiting.

Shortly thereafter, I received a letter (sent March 29, 2015) from Mr. Crawford, letting me know that guards are withholding his mail in retaliation. He also said, “One of the officers indirectly threatened me and tried to intimidate me with sabotaging the next visit.” In another letter, written to a mutual friend, Mr. Crawford stated, “The staff here tell me I am going to suffer simply because two 30-year-old white women visited me of their own free will.”

What decade is this? It is unthinkable that your staff would be allowed to threaten Mr. Crawford for having a friendship with two white women. Does this threaten the officers, make them insecure? There have been centuries of racist and patriarchal violence such as this and I refuse to stand by while my friend Mr. Crawford is subjected to more of the same.

What decade is this? It is unthinkable that your staff would be allowed to threaten Mr. Crawford for having a friendship with two white women.

We are bringing this to your attention so that you will be informed of these racist words from your staff and will take effective measures to see that these practices are not allowed to continue and that a formal apology is given to Mr. Crawford.

I will be following up this letter with complaints about the abuse and retaliatory behavior that Mr. Crawford has been receiving in the facility that you are responsible for. I would like an answer from you within one week of receiving my letter [sent April 8, 2015], as these circumstances are very concerning.

Annie Banks participates in the Human Rights Pen Pal Program. Participants outside the walls are in great demand. Learn more at https://prisonerhungerstrikesolidarity.wordpress.com/2015/02/14/become-a-human-rights-pen-pal/. 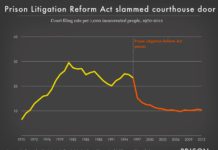 Are we a part of Black Lives Matter?