After reading an article that criticized Serena Williams’ physique, I threw my hands up in disgust and allowed the “angry Black woman” inside me to explode. 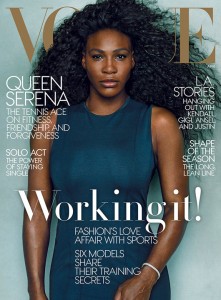 The New York Times article stated that Williams “has large biceps and a mold-breaking muscular frame, which packs the power and athleticism that have dominated women’s tennis for years. Her rivals could try to emulate her physique, but most of them choose not to.”

I’m outraged at attempts to break Serena down by attacking her physique. This attack begins with the premise that Black isn’t beautiful and white is. Further, concepts of beauty and physical appearance are intertwined.

In the Western world, beauty is often understood by examining one’s physical appearance. For men and women, confidence and self-esteem are enmeshed in notions of physical beauty. Proponents of white supremacy — who believe that whiteness is superior to Blackness — have attempted to chip away at Williams’ self-confidence by attacking her appearance.

Now we see that the writer’s intentions were clear. In penning an article that was racist, sexist and deeply offensive, the writer participated in a battle to alter Williams’ powerful and intact self-concept. The writer rejected Williams not only because she keeps winning, but because she’s winning in a Black body. Indeed, it is the winning, the continuous, consistent, and infallible winning that this system of white supremacy rejects.

The mainstream media has the audacity to undermine Williams’ success by openly criticizing her physique. And there is a freedom to undermine her because she is a Black woman who transcends the restrictions imposed by white supremacy. There is a hatred that comes with seeing a Black woman excel at a sport that rests on the crux of white society. Further, Williams cannot be attacked by suggesting that she is a bad player — because she’s an amazing player — so instead there’s a focus on her inability to conform to white conceptions of beauty and femininity.

In penning an article that was racist, sexist and deeply offensive, the writer participated in a battle to alter Williams’ powerful and intact self-concept. The writer rejected Williams not only because she keeps winning, but because she’s winning in a Black body.

Recently, we’ve seen the rejection of powerful Black women who dare to explore topics that make white Americans feel uncomfortable. Whether they are directing films about Civil Rights leaders or making music videos about dishonest accountants, Black women are criticized or shunned.

Indeed, director Ava DuVernay wasn’t nominated for an Academy Award for the film “Selma,” despite the fact that Selma was nominated for Best Picture. In addition, singer Rihanna’s graphic music video for “B***h Better Have My Money” – which she helped to direct – is highly disturbing due to the level of violence it depicts.

However, there is a sense that Rihanna’s video is abhorred because it places a Black woman in a position of authority. It is no surprise that as Black women seek positions of greater responsibility, many are choosing to “strike out on their own.”

Strong Black women are difficult to accept, so what does the mainstream media do? Well, it rips them apart and attacks their sexuality; it undermines their self-concept and their femininity. It goes to a place where their insecurities are formed and shapes them.

Let’s be clear, Williams, who is a powerful, beautiful Black woman in the prime of her life, is an athlete and a great one at that. Her physique, which is a symbol of training, hard work and commitment, is a natural consequence of striving to be the best. And she does it with such grace that she has become a role model. Her significance as a role model, and not her physique, should be the focus of media attention.

Consequently, Williams has become my heroine. Her strength in the face of rejection is inspiring. Her perseverance and self-belief is fascinating, and future generations will look back on her achievements with awe. She will be considered one of the greatest tennis players of all time, and the haters who implied that she looks like a man will be buried and forgotten.

The New York Times article wasn’t just an attack on Williams, but an attack on all women. It seems women who decide to challenge stereotypical notions of femininity are openly rejected.

Williams looks fantastic, and on the basis of her recent Vogue cover, there are media outlets that appreciate her beauty.

I was disappointed that this article was published by an outlet with a wide readership. The New York Times failed in its bid to release an article of substance and quality – Serena Williams deserves an apology.

As someone who is active and strives to maintain a high level of fitness, and as a Black woman who also gains muscle very easily, I interpreted attacks on Williams’ physique to be analogous to a personal attack.

Jacqueline Bediako is a Ghanaian writer, teacher and activist who was born in London, England. After completing her undergraduate studies in England, Jacqueline moved to America. She currently lives in Brooklyn, New York, and has called New York City home for the past seven years. Her work focuses on race, politics and the education of students with disabilities. Follow her @jb2721.